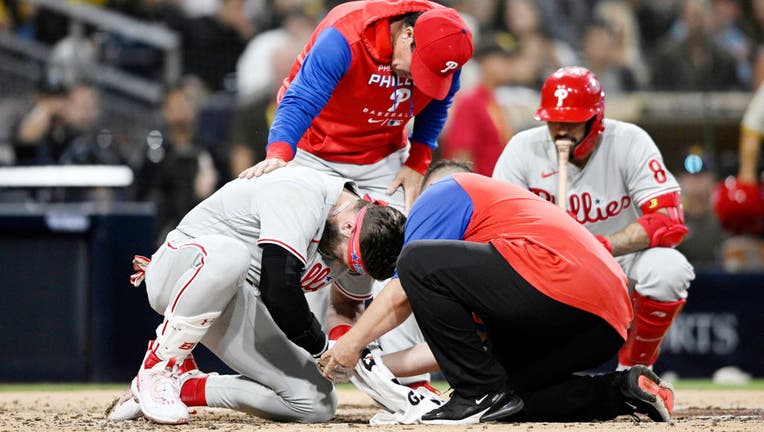 SAN DIEGO, CA - JUNE 25: Bryce Harper #3 of the Philadelphia Phillies is looked at after being hit with a pitch during the fourth inning of a baseball game against the San Diego Padres June 25, 2022 at Petco Park in San Diego, California. (Photo by D

PHILADELPHIA - Reigning NL MVP Bryce Harper was placed on the 10-day injured list Sunday with a broken left thumb and the Philadelphia Phillies haven't yet announced a timeline for his return.

Harper's thumb was broken when he was hit by a 97 mph pitch from San Diego Padres left-hander Blake Snell on Saturday night.

Harper will see a specialist after the team returns to Philadelphia. Beyond that there is no timetable for his return, manager Rob Thomson said before the Phillies and Padres played the finale of a four-game series.

The 29-year-old Harper is hitting .318 with 15 home runs, 48 RBIs and a .985 OPS, and has helped the Phillies recently surge back into playoff contention.

Harper was not available Sunday but said after Saturday night's game that it's "just a bummer. I am really bummed out."

Harper checked his swing as the pitch rode inside and high toward his shoulder before hitting him on the outside of the left hand in the fourth inning. He fell to the ground and was in pain as he held his hand while on his knees for several minutes.

Moniak was due in San Diego right around game time, Thomson said. The outfielder was the No. 1 pick overall in the 2016 draft out of La Costa Canyon High in Carlsbad, just north of San Diego. He played in nine games with the Phillies earlier this year, hitting .160 with one RBI. Overall he's hitting .139 with one homer and four RBIs in 72 at-bats over three seasons.

Thomson said Moniak, a left-handed batter, will play in lot in the near future.