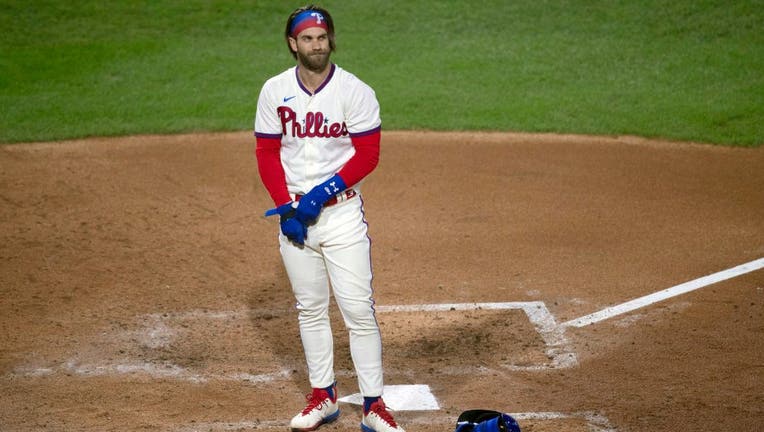 Bryce Harper #3 of the Philadelphia Phillies looks on after striking out to end the bottom of the third inning against the Toronto Blue Jays at Citizens Bank Park on September 19, 2020 in Philadelphia, Pennsylvania. (Photo by Mitchell Leff/Getty Imag

PHILADELPHIA - The Phillies could hit the road for their playoff push without Bryce Harper in the lineup.

Harper left Philadelphia’s 6-3 loss Sunday to the Toronto Blue Jays with lower back stiffness, and any absence of the slugging right fielder could sap the Phillies' bid for their first playoff berth since 2011.

Harper exited after he struck out with the bases loaded in the seventh inning. He took a slow walk in the dugout toward the clubhouse and signaled to manager Joe Girardi he was done for the day.

“He’ll get a lot of treatment and we’ll keep our fingers crossed,” Girardi said.

Harper has 11 homers and 28 RBIs for the Phillies, who hit the road for the final seven games. The Phillies played about as poorly as their sports complex neighbor, the Philadelphia Eagles, as they failed to sweep the Blue Jays. On a sports day in Philly that normally would have been hopping with tailgates, thick traffic and — given the results — a cacophony of boos, the Phillies limped out of town in front of a few thousand cardboard cutouts and the Phanatic standing atop the dugout and shaking his hands at Blue Jays pitchers in a furry, failed attempt at a curse.

“I feel good about going into these seven games,” Girardi said.

Teoscar Hernandez hit a two-run homer and Taijuan Walker tossed six sharp innings to help Toronto snap a six-game losing streak. The Blue Jays (27-26) held onto the eighth and final playoff spot in the American League. They return home to Sahlen Field in Buffalo, New York, for the final seven games to try and earn a trip to the postseason.

Walker (4-3) allowed four hits and struck out eight on a chilly, breezy day at the ballpark. Walker, acquired last month from Seattle to help Toronto’s playoff push, allowed only Did Gregorius’ RBI double off the right-field scoreboard in the second.

“I thought today was a huge win to give us momentum going into the next series. It’s going to be a big series for us,” Walker said.

Trailing 6-1 in the seventh, the Phillies loaded the bases with no outs with Harper up against righty Thomas Hatch. Harper struck out swinging. Alex Bohm’s grounder up the middle was thrown away by second baseman Joe Panik, making it 6-3.

Toronto’s bullpen handled it the rest of the way. Anthony Bass earned his sixth save.

Adonis Medina (0-1) allowed two runs over four innings in his big league debut for the Phillies. Heath Hembree gave up Jonathan Davis’ two-run double in the sixth and Hernandez’s two-run shot in the seventh for a 6-1 lead.

“I think things are going to turn around in our favor,” Davis said.

The Phillies optioned OF Mickey Moniak, the No. 1 overall pick of the 2016 amateur draft, to Lehigh Valley to make room for Medina.

The Phillies finished 19-13 at home. Girardi said the Phillies enjoyed the fans — the Phandemic Krew — that camped outside the ballpark and blew air horns and cheered for the home team.

Phillies catcher J.T. Realmuto (hip) is not ready to catch on Monday. He has missed 10 games with the injury. Girardi didn’t know if Realmuto could pinch-hit or serve as the DH against the Nationals. ... Phil Gosselin took over for Harper in right field.

Toronto: Heads home to Buffalo for a four-game series with the Yankees. Neither team had announced a starter for Monday’s opener.

Phillies: Play the final seven games of the season on the road. Philadelphia sends RHP Zack Wheeler (4-0, 2.62 ERA) to the mound for the start of a four-game series at Washington against RHP Anibal Sanchez (2-5, 7.38).