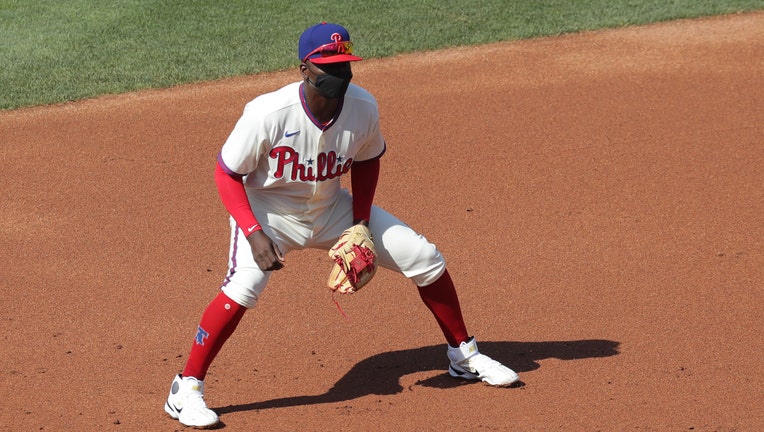 Didi Gregorius #18 of the Philadelphia Phillies plays shortstop during a game against the Miami Marlins at Citizens Bank Park on July 25, 2020 in Philadelphia, Pennsylvania. The 2020 season had been postponed since March due to the COVID-19 pandemic.

PHILADELPHIA - The Philadelphia Phillies and Miami Marlins will play seven times in five days as part of Major League Baseball’s reconfigured schedule released Thursday to account for 21 coronavirus-caused postponements in the first two weeks of the season.

The Marlins, who had their season suspended for over a week due to a team-wide outbreak, will finish the season playing 27 games in 23 days, a stretch featuring no days off and four doubleheaders in a 10-day span.

Miami was already scheduled to host Philadelphia for four games Sept. 10-13. The series has been extended to include a game on Monday, Sept. 14, and doubleheaders have been scheduled for that Friday and Sunday.

MLB shortened doubleheaders this year to a pair of seven-inning games to help keep pitchers fresh during a condensed 60-game schedule that’s been squeezed further by the rash of postponements.

The Red Sox's scheduled visit to Miami on Sept. 14 has been pushed back a day to make room for the seven-game Phillies series. The Marlins have also scheduled three doubleheaders with the Nationals — Aug. 22, Sept. 18 and Sept. 20 — to make up games postponed from last weekend.

The Phillies will play doubleheaders against the Toronto Blue Jays on Aug. 20 and Sept. 18, and also added a home doubleheader against Boston for Sept. 8.

The St. Louis Cardinals, who have been out of action since July 31 because of an outbreak, have added three doubleheaders against the Brewers to a previously scheduled series to make up their three games postponed last weekend. Milwaukee will host doubleheaders Sept. 18 and 20 and will serve as the home team in the opener of a twinbill in St. Louis on Sept. 25.

The Cardinals will make up this week’s series against the Detroit Tigers with doubleheaders Aug. 13 and Sept. 10. St. Louis had been scheduled to play the Chicago White Sox at the Field of Dreams in Iowa on Aug. 13. Those teams will play in Chicago on Aug. 14 instead.