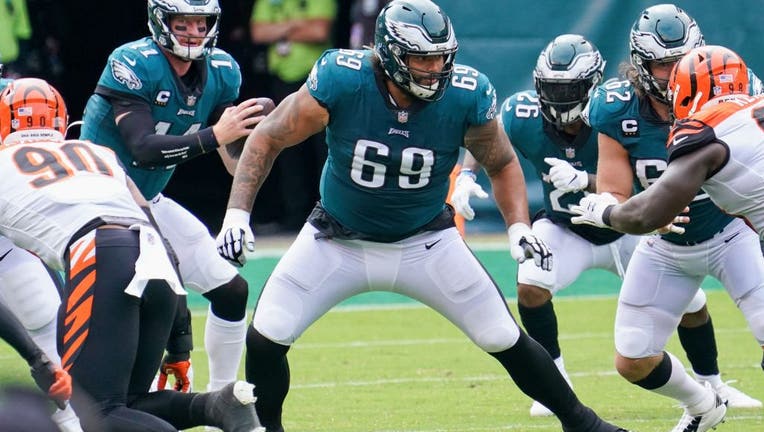 PHILADELPHIA - The Philadelphia Eagles will once again be starting someone new along their offensive line when they take on the Baltimore Ravens on Sunday.

Veteran offensive lineman Jamon Brown will make his first start in an Eagles uniform Sunday, filling in for right guard Matt Pryor who will be sidelined with an illness. Despite being new to the Eagles, Brown brings some veteran experience to the depleted line having appeared in 60 games over his six seasons in the NFL.

Doug Pederson announced Friday morning that he was uncertain whether or not Lane Johnson would start next to Brown at right tackle, as he continues to deal with an ankle injury. The Eagles released their injury report Friday afternoon and listed Johnson as out, meaning rookie tackle Jack Driscoll would get the start.

On Brown's left side will be the only remaining starter from the team's projected starting offensive line heading into the season in center Jason Kelce.

As for the Eagles' depleted receiving corps, Pederson had said there was a "possibility" DeSean Jackson would be able to play Sunday. He too as has been listed out. As for Alshon Jeffrey, who has yet to suit up this season is also out as he works his way back from a foot injury.

In the defensive backfield, star cornerback Darius Slay has cleared the league's concussion protocol. He is officially listed as questionable for Sunday. Avonte Maddox will remain sidelined with an ankle injury.

Earlier this week, safety Will Parks received medical clearance to return to action, and could make his Eagles debut Sunday after signing with his hometown team in the offseason.

Parks, who was not on the team's injury report Friday, will hopefully fill in the spot vacated by safety Marcus Epps who has been ruled out Sunday with a rib injury.

The Eagles have placed Pryor on the Reserve/COVID-19 list, which was created for a player who either tests positive or has been in close contact with someone infected.

Also returning to Lincoln Financial Field this Sunday will be several thousand fans. The city increased occupancy limits for outdoor events earlier in the week, allowing 7,500 persons, including players and staff, inside the stadium Sunday.