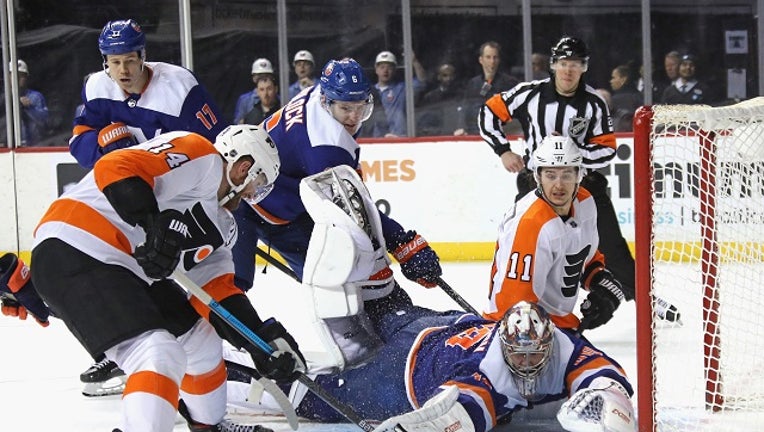 NEW YORK - Ryan Pulock scored the tiebreaking goal with 41 seconds remaining and the New York Islanders recovered after giving up a three-goal lead to beat the Philadelphia Flyers 5-3 Tuesday night.

Josh Bailey, Jordan Eberle and Leo Komarov each had a goal and an assist, and Matt Martin also scored to help the Islanders win for the fifth time in eight games (5-1-2). Mathew Barzal had three assists.

Semyon Varlamov stopped 35 shots as New York beat its Metropolitan Division rival for the third time in three meetings this season. The Islanders, splitting home games between the Nassau Coliseum and Barclays Center, improved to 7-0-3 in Brooklyn.

Travis Konecny, Robert Hagg and Sean Couturier scored for the Flyers, who lost for just the fourth time in 12 games (8-3-1). Claude Giroux and Scott Laughton each had two assists, and Brian Elliott finished with 20 saves.

Couturier tied the score 3-all with 1:32 remaining from the left side on a carom off the end boards for his 16th of the season.

Komarov added an empty-netter in the closing seconds to seal the win.

Varlamov gloved a shot by Philippe Myers on a rush at 5:44 of the second, preserving New York’s 3-0 lead and drawing chants of “Var-ly! Var-ly!’ from the crowd.

The Flyers then scored twice in 2:22 to get within one.

Konecny fired a shot from the left point that beat Varlamov for his team-leading 19th to pull Philadelphia to 3-1 at 9:34.

Hagg crashed the net and knocked in the rebound of Claude Giroux’s shot with just under eight minutes remaining in the middle period. It was the defenseman’s second of the season and first since Jan. 8 against Washington.

With the Islanders on the game’s first power play, Varlamov made a stellar stop on Michael Raffl’s short-handed try to preserve the lead with 3:42 left.

The Islanders scored three times in a 7:51 stretch of the first period to take the lead.

Bailey opened the scoring at 7:45 as he fired a one-timer off a pass from Barzal from the top of the left circle. The puck deflected off the stick of Philadelphia’s Tyler Pitlick and under the crossbar for Bailey’s 12th.

Martin made it 2-0 as he scored from the right side on a 2-on-1 rush with Leo Komarov with 8:47 left in the first. It was Martin’s fifth of the season and second in four games. Komarov got his 100th career assist on the play.

After some sustained pressure in the offensive zone, the Islanders added to their lead with 4:24 remaining in the opening period as Eberle knocked in the rebound of Barzal’s backhand for his 10th.

Flyers: At Florida on Thursday night and Tampa Bay on Saturday to finish a three-game trip.

Islanders: At Nashville on Thursday night to open a four-game trip.