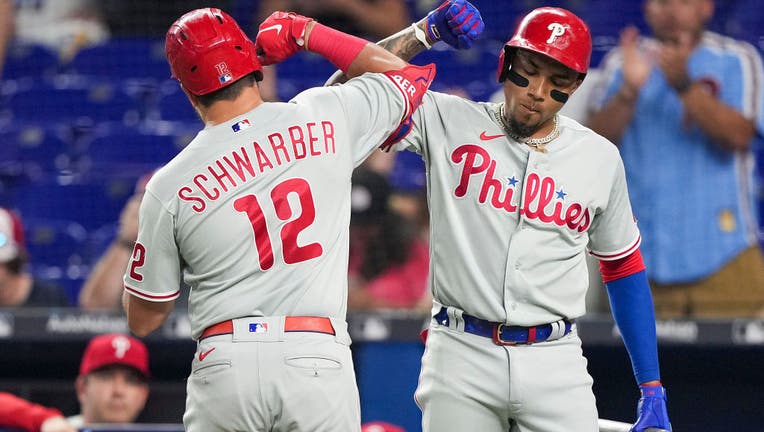 MIAMI - Kyle Schwarber hit his NL-leading 29th homer, J.T. Realmuto had a homer and a double and the Philadelphia Phillies spoiled the major league debut of touted Miami pitcher Max Meyer, beating the Marlins 10-0 on Saturday.

Didi Gregorius and Rhys Hoskins also went deep for the Phillies, who had not scored more than three runs in their previous seven games. Gregorius finished with four RBIs.

Philadelphia starter Ranger Suárez pitched five scoreless innings of four-hit ball. Activated from the injured list Saturday, Suárez struck out four in his first outing since June 29. Suárez was sidelined because of a low back strain.

The 23-year-old Meyer, the third overall selection in the 2020 draft, was lifted after Realmuto’s one-out double in the sixth. Meyer allowed five runs, seven hits, walked one and struck out five.

Realmuto, who played with the Marlins from 2014-18, gave Philadelphia a 2-0 lead with his two-run shot in the fourth. He is 5 for 9 since sitting out the Phillies’ two games in Toronto because of Canadian restrictions on unvaccinated travelers.

Philadelphia broke it open with a five-run eighth against reliever Cody Poteet. Gregorius hit his first homer, a two-run shot, and Schwarber added a solo blast.

Four Phillies relievers followed Suárez and limited the Marlins to one hit. Miami didn’t have another base runner after Jesús Aguilar’s two-out single in the sixth.

Suárez improved to 3-0 and lowered his ERA to 1.24 in his last nine outings against the Marlins. Five of the appearances were in relief before Suárez became a starter late last season.

MARTÍNEZ ON THE MOUND

Former major league pitcher Dennis Martínez threw the ceremonial first pitch before the game. Martíinez, who was born in Nicaragua, won 245 games during his 23-year career. The game coincided with the Marlins’ Nicaraguan Heritage promotion.

The Phillies reinstated INF Johan Camargo from the 10-day injured list and optioned RHP Mark Appel and OF Mickey Moniak to Triple-A Lehigh Valley. Camargo entered in the eighth and singled.