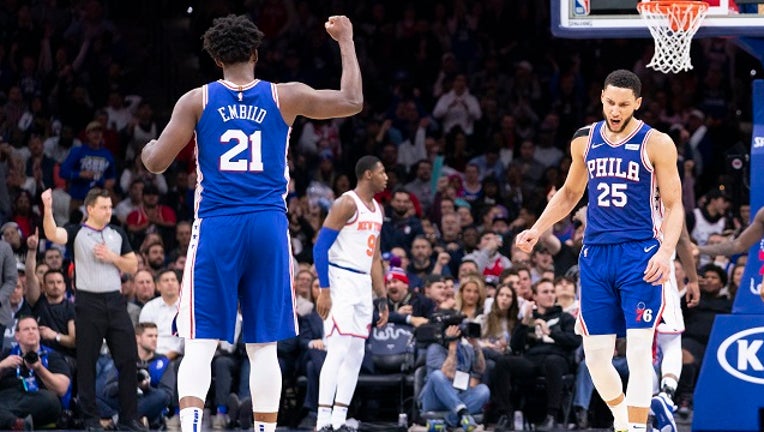 Joel Embiid #21 and Ben Simmons #25 of the Philadelphia 76ers react against the New York Knicks in the fourth quarter at the Wells Fargo Center on November 20, 2019 in Philadelphia, Pennsylvania. The 76ers defeated the Knicks 109-104.

PHILADELPHIA (AP) - Ben Simmons wore a “Sesame Street” sweatshirt in the locker room, the classic characters lined up on the familiar street. The theme seemed appropriate for 76ers fans, because it was finally time to count Simmons’ 3-pointers.

One! One 3-pointer for Ben Simmons!

"Hold me back, fam!” 76ers announcer Marc Zumoff exclaimed on the TV call.

The anticipated shot didn’t win a playoff or even big regular-season game. Simmons, though, got the weight of the ridicule for the career 0-fer off his back when he hit the first 3-pointer of his career and had 18 points and 13 assists to lead Philadelphia to a 109-104 victory over the New York Knicks on Wednesday night.

Mike Scott's fourth 3-pointer of the game with 1:29 left stretched the Sixers’ lead to 99-95 and they held on after New York’s Marcus Morris hit a pair of 3s in the final 10 seconds. Joel Embiid had 23 points and 13 rebounds, and Scott scored 12 points.

The only shot that mattered in Philly was the 3 from Simmons, finally, in his 172nd career game and after nearly $19 million in salary.

“It feels good, yeah. You put in work in the summer and it pays off,” Simmons said.

Simmons did the improbable when he fired a 24-footer from the corner in front of the 76ers bench and the shot was good, sending the crowd into a frenzy. Simmons received a lengthy standing ovation for the first 3-pointer after 17 misses (and one more miss in the postseason) to start his NBA career. The 23-year-old Simmons is an All-Star and franchise cornerstone for the Eastern Conference contenders, a triple-double threat each time out.

But never a long ball threat, a fact that earned him derision around the league.

He's been criticized for his lack of outside shooting, defiant at times about his weakness and spent the offseason working hard on improving his jumper. Simmons said at the start of training camp, if he's open for a 3-point shot, "I'll take it."

“Other people get more excited than I do,” coach Brett Brown said. “But how can it not be a good thing? But if we’re all honest, that’s the first legitimate 3 that he’s taken.”

Simmons sank a 3 against the Guangzhou Loong-Lions of China in the preseason that had Sixers fans treating the shot like he hit a winner in an NBA postseason game.

Against the Knicks, Simmons took a bounce pass from Furkan Korkmaz and calmly drained the shot with 8:20 left in the first quarter.

"There's Simmons. Yes! He did it," Zumoff said. “Maybe now they'll finally leave him alone after that! He hits the 3! The first of his NBA career!"

He did it in front of everyone from fans that paid $8 on the secondary market for an upper deck ticket to Hall of Famer Julius Erving. Simmons' older sister and , Liv, clapped back at critics, tweeting, "Now you can all shut the hell up...."

Simmons hit one 3; the four-win Knicks hit 11, and used a fantastic third quarter to take a 17-point lead. Morris led the Knicks with 22 points.

Simmons even played peacemaker in a scrap between his teammate Embiid and Morris, a Jayhawk-on-Jayhawk altercation that had Kansas fans everywhere waving the white flag instead of the wheat. Morris dragged Embiid to the court late in the second quarter, and the Sixers All-Star center popped up in anger. Simmons pulled away his teammate to avoid a repeat of Embiid's brawl last month with Minnesota's Karl-Anthony Towns that earned him a two-game suspension. Embiid and Morris jawed at each other and each was hit with a technical foul. Morris also earned a flagrant.

“I just got thrown on the ground and I really don’t know why I got a technical foul,” Embiid said. “I’m being the victim and didn’t do anything. I feel like it’s starting to get ridiculous with the flagrants.”

It's not the first confrontation between the two: Morris played for Boston when he was trash-talked by the theatrical Embiid. Morris held up three fingers to show Boston was up 3-0 in a 2018 playoff series.

“He started it last year in the playoffs and he keeps going,” Embiid said.

They went back-and-forth in the fourth in Philly.

Embiid thundered a two-handed jam off a turnover to tie the game at 82-all and put some life back in the Sixers only for Morris to hit a jumper for an 85-83 lead.

“He be flapping. He was flapping and grabbing,” Morris said. “I’m not the one that’s gonna take that. He knows that.”

“Big dog, I’m 240,” Morris, on if he was surprised how easily Embiid crashed to the ground.

Simmons, a native Australian, said he was excited Brown seems set to return to coach the Australian national team in the Olympics.

“I'm looking forward to it. He's coaching me now, so we have a great relationship,” Simmons said.

Knicks: Lost to the 76ers for the ninth straight time. ... Julius Randle and Frank Ntilikina each scored 17 points. ... Morris led with four 3s.

76ers: G Josh Richardson sat out with hip injury and was replaced in the starting lineup by Korkmaz. ... Hit 13 3s.

Knicks: Host the Spurs on Saturday.