Australian Ariarne Titmus — nicknamed the "Terminator" — lived up to her billing when she chased down Ledecky in the 400 freestyle to win one of the most anticipated races of the Summer Games.

Titmus captured the gold medal with the second-fastest time in history.

Titmus, who trailed by nearly a full body-length at the halfway mark of the eight-lap race, turned on the speed to touch in 3 minutes, 56.69 seconds.

Defending Olympic champion and world-record holder Ledecky settled for the silver this time in 3:57.36 -- the fourth-fastest time ever recorded.

Maggie MacNeil has captured Canada’s first gold medal at the pool with a victory in the women’s 100-meter butterfly.

Huske went out fast, as is her style, and appeared to be close to the front with about 10 meters to go. But she faded on her final strokes and just missed a spot on the podium.

The U.S. team was denied a medal for the first time in the swimming competition.

Then the spotlight shifted to Dressel, who has been hailed as the successor to Michael Phelps. Dressel put the U.S. out front, and the three who followed him in the relay made sure it stood up.

The 24-year-old, tattooed Floridian swam the first leg in a blistering 47.26. Blake Pieroni and Bowe Becker kept the Americans out front before Zach Apple turned in an anchor leg of 46.69 to leave no doubt at the end.

"The scariest part was my leg for myself, because I had control over that," Dressel said. "I knew they were going to get the job done, I wasn’t scared at all. Especially when Zach hit the water. I saw him break out and I knew it was over."

Apple climbed from the pool to an embrace from Dressel, who is set for a grueling schedule of three individual events and three relays in Tokyo.

RELATED: Tokyo Olympics: Who to watch on Team USA

America's second gold medal came in the 10-meter rifle event, where Will Shaner held off China’s Yang Haoran and Sheng Lihao to pick up Team USA’s first-ever gold medal in the event. The third gold belongs to Lee Kieffer, who won the women’s foil individual in fencing.

And Anastasija Zolotic won America's fourth gold by beating Russian athlete Tatiana Minina 25-17 in the featherweight division of women’s taekwondo. It's the first time an American has ever taken the gold in the event. 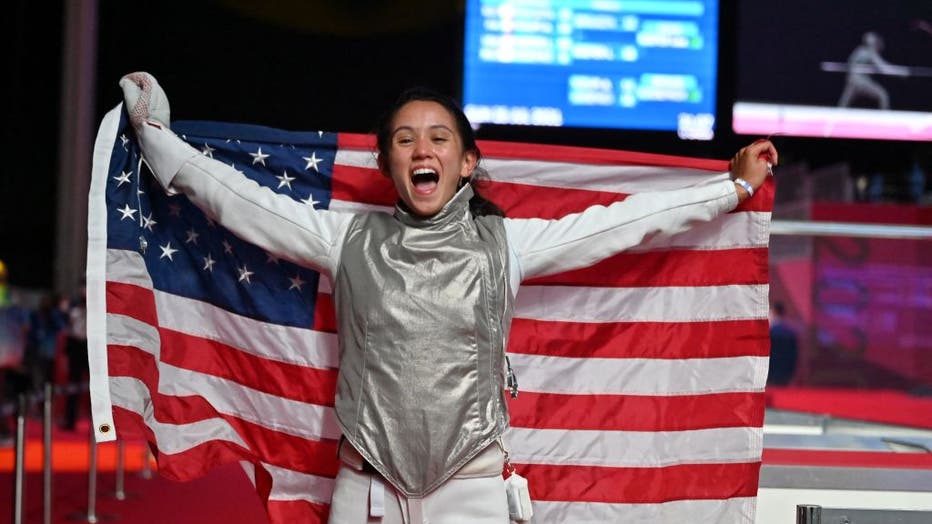 Only China, with 15 medals, has more than Team USA at 14. But the Americans have plenty of opportunities to catch up.

U.S. Softball qualified for Tuesday’s gold medal game against Japan after a 2-1 walk-off win over Australia on Sunday.

There are a plethora of swimming events remaining. Katie Ledeckey and Caeleb Dressel are expected to lead the way for the Americans.

Simone Biles, America’s most decorated gymnast of all time, finished her round first in vault and first in the all-around competition — but those were the only categories she was tops in at the end of the day.

She was eighth in the uneven bars, third in the balance beam and second in the floor routine.

And on the hardcourt, Team USA finally reached full strength now that the NBA Finals have concluded. Khris Middleton and Jrue Holiday joined the squad from the newly crowned champion Milwaukee Bucks, as has Devin Booker from the Phoenix Suns.

But having the full squad did little to help them against France. The Americans fell to the French 83-76 on Sunday. If the U.S. wins the remaining group stage games against Iran and Czechia, it'll advance to the medal round.

NBC says an estimated 17 million people in the United States watched the opening ceremony for the Tokyo Olympics, down 36% from the kickoff to the Rio de Janeiro Games five years ago.

Nielsen says the 17 million includes people who watched the ceremony live on NBC or online when it aired Friday morning and those who saw an edited version on NBC in prime time that night.

NBC was unable to break down how many people watched live and how many saw the prime-time version. The 26.7 million who saw the Rio opening ceremony included both television and online viewership.

Nine years ago, when the Summer Olympics were held in London, the opening ceremony drew a record-setting U.S. audience of 40.7 million people.

It’s difficult to tell how much the sluggish start to the Tokyo Games reflects decreased interest in the Olympics, which were delayed a year because of the COVID-19 pandemic, or profound changes in how Americans watch television. With the explosion of streaming as an alternative, ratings for live television have dropped sharply over the past five years.

This story was reported from Atlanta. The Associated Press and FOX News contributed to this report.