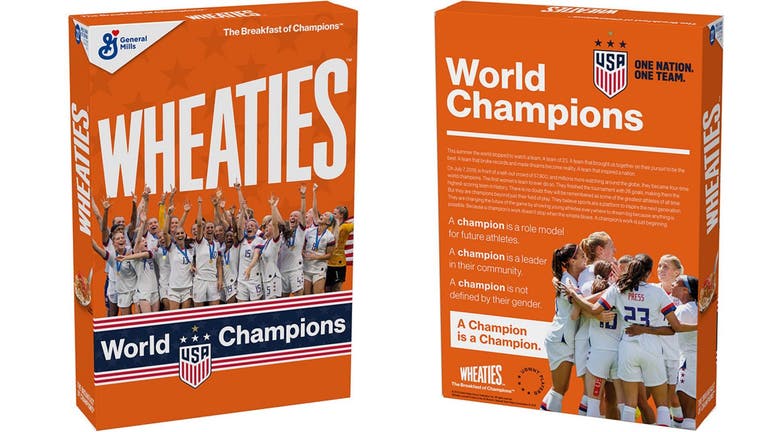 FOX NEWS - The U.S. women’s national soccer team is joining a list of other world-class athletes who, since the 1950s, have graced the cover of the Wheaties cereal box.

The General Mills cereal announced this week the record-setting World Cup championship team will be featured on a limited-edition box, sold exclusively through Wheaties.com.

“It is beyond wonderful to see our team on the cover of the iconic Wheaties box,” Becky Sauerbrunn, USWNT defender said in a press release. “Not only is it an honor to have our team recognized amongst some of the world’s most renowned athletes, this highlights our 2019 world championship title as more than just a win for the sport of soccer, it supports our drive for women’s equality in all sports.”

This box will be sold for $23 – a nod to the 23 women who took home the United States’ fourth World Cup trophy. Only 10,000 of the special products will be available.

This limited-edition box comes in partnership with tennis star Serena Williams, who in June was given her own Wheaties box as part of the “She’s a Champion” campaign.

“The USWNT captivated the world this summer,” Williams said in a press release. “They impressed us all with their incredible accomplishments on the field – and their use of sports as a platform to inspire the next generation of girls.”

She added: “I believe a champion embodies a person in all aspects of their life and I am so proud to share my time on the Wheaties box with these amazing women who are doing just that. When we support each other and build each other up, we can do anything.”

Wheaties said that 100 percent of the profit will be donated equally to two organizations: Girls in the Game and the U.S. Soccer Girls Development Academy.

The U.S. women’s team members, who begin their victory tour Saturday at the Rose Bowl in California, are in the middle of a legal fight with the U.S. Soccer Federation over equitable pay.