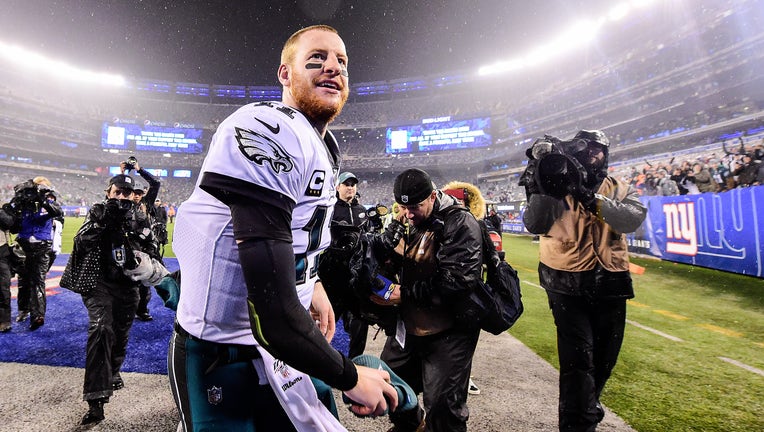 Carson Wentz #11 of the Philadelphia Eagles walks off the field after his teams win over the New York Giants at MetLife Stadium on December 29, 2019 in East Rutherford, New Jersey. (Photo by Steven Ryan/Getty Images)

PHILADELPHIA - Carson Wentz was forced to watch from the sideline as Nick Foles became a local legend, leading the Philadelphia Eagles to the franchise's first Super Bowl title two years ago.

Wentz was a spectator again last season when Foles rallied the Eagles to three straight wins, an unlikely playoff berth and a wild-card victory.

Wentz avoided injuries while seemingly everyone around him went down, set franchise passing records and led the Eagles (9-7) to four consecutive wins down the stretch and their second NFC East title in three seasons.

"I'm grateful to be healthy and be in this moment with these guys, to be on the field," Wentz said. “I'm just excited for the challenge. I've been on the sidelines the last few years for these games, so I'm pretty pumped for the opportunity.”

Wentz started all 16 games for the second time in his four seasons. He set single-season team records with 4,039 yards passing and 388 completions.

Wentz became the first quarterback in NFL history to throw for 4,000 yards without a single wide receiver reaching 500. Tight end Zach Ertz led the team with 916.

Unknown players step up for Philadelphia Eagles in clutch moments

The constant was Wentz, who silenced most critics with his clutch performance in must-win games. The Eagles had to win their last four games to secure a playoff berth. Wentz led them to consecutive comeback victories to start the winning streak and completed 67.6% of his passes for 1,199 yards, seven TDs and no interceptions in those four games.

“The guys really, and I have so much faith and trust in him that I can call almost any play and he's either going to make that one work or he's going to get us into a better play, and so he's really grown up that way and really matured that way in this league and just really turned into a pro.”

Wentz, the No. 2 overall pick in 2016, had a breakout sophomore season when he finished third in NFL MVP voting. He led the Eagles to an 11-2 record and set a franchise record with 33 touchdown passes that season, including his final one after he tore two ligaments in his knee.

He missed the rest of the season while Foles stepped in and led the Eagles to a 41-33 victory over New England in the Super Bowl, earning MVP honors.

Foles got a statue outside the stadium and will forever be revered in the city. His popularity only grew last season when he went 4-1 in December and January.

But Wentz is the franchise quarterback and Foles went off to Jacksonville. Wentz got a huge contract extension in the offseason and heard plenty of criticism from doubters throughout the season.

He played his worst game in a 17-9 loss to Seattle in Philadelphia on Nov. 24. He threw two picks and lost two fumbles in that one.

That can't happen this time around.

"Everyone kind of feels the sense of urgency, but I don't think anyone presses or feels they need to do anything different," Wentz said. “We know what we have to do. Offensively, we know we've got to take care of the football, we have to stay on the field, we have to put some points up on the board, and we're excited for the challenge.”

Though this will be Wentz's first playoff game, the last four games had similar pressure because one loss would've knocked the Eagles out of contention.

"He doesn't have to focus on anything more than just continuing to lead this team and doing the things that have made him successful down the stretch here," Pederson said. "I don't want to add any more stress or pressure on him. Just the game itself, it's a one-and-done mentality and I want him to play free and not have to worry about things in the past that are out of our control."