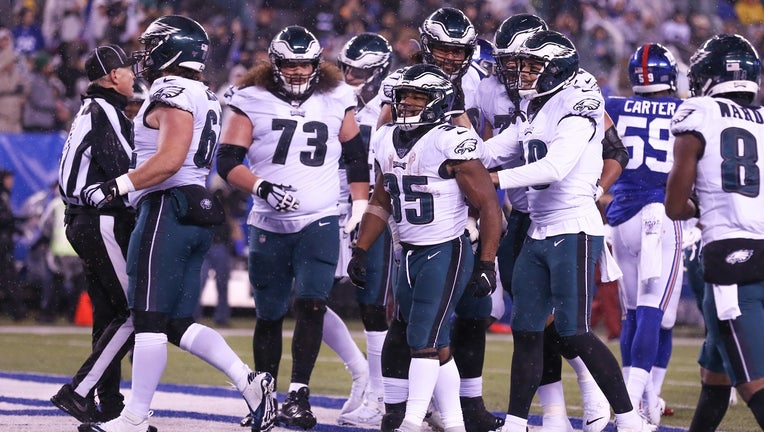 Running back Boston Scott, tight end Josh Perkins and wide receivers Greg Ward, Deontay Burnett and Robert Davis were cut a combined 18 times by seven teams in their careers. But the Eagles relied on them in an elimination game in Week 17.

The group combined for 279 scrimmage yards and four touchdowns in a 34-17 win over the Giants that clinched the NFC East title for Philadelphia (9-7). They’ll be counted on again when the Eagles host Seattle (11-5) in a wild-card game on Sunday.

Who are these guys?

Scott, only 5-foot-6 but powerful, was a sixth-round pick by New Orleans in 2018. The Eagles signed him off the Saints’ practice squad in December 2018 and he returned kickoffs in the playoffs last season.

Scott was among the final cuts in training camp, re-signed to the practice squad and was promoted in October after injuries to Corey Clement and Darren Sproles.

With Miles Sanders on the sideline and Jordan Howard only getting one snap, Scott ran for three TDs against the Giants and led the team in yards rushing (54) and receiving (84).

Perkins signed with Atlanta in 2016 after going undrafted. He caught a touchdown pass from Matt Ryan that season and played in the Super Bowl loss to New England. The Eagles signed him in January 2018 and he has spent time on the active roster and practice squad over the past two seasons. He was promoted after a slew of injuries and had nine catches for 87 yards in the two wins over the Giants, including a 24-yard TD catch.

“It’s the culmination of all the hard work I’ve been putting in all year,” Perkins said. “You just keep grinding it out. We’ve been dealing with a lot of adversity throughout the year, so it shows the toughness of this team and the next-man-up mentality.”

Ward’s journey began as a quarterback at the University of Houston. He converted to receiver after going undrafted. The Eagles signed him in 2017 and he was on the practice squad when the team won the Super Bowl two seasons ago. Ward has been cut six times but finally got his chance in November. He caught a 4-yard TD pass in the final minute of a comeback win at Washington on Dec. 15 and has 21 catches for 209 yards during Philadelphia’s four-game winning streak.

Burnett signed as a rookie free agent with Tennessee in 2018, made 10 catches for the Jets last year, briefly spent time with the 49ers this season and came to Philadelphia in December. He was promoted to the active roster last week and had a 41-yard catch against the Giants.

Davis was a sixth-round selection by Washington in 2017 and made one catch in parts of three seasons with Washington. He joined the Eagles in October and was promoted from the practice squad in December. He made an excellent grab against the Giants for 39 yards that was negated by a holding penalty.

“We’ve had new playmakers every week, different guys stepping up because guys are getting hurt and banged up,” Wentz said. “It’s just fun to see guys step in big moments like that, guys who were on the practice squad. For them to step up in the way they have and for guys to make plays, it’s been so cool to see. I think that’s what makes it that much more fun to do what we did and then hopefully we can go do something special.”