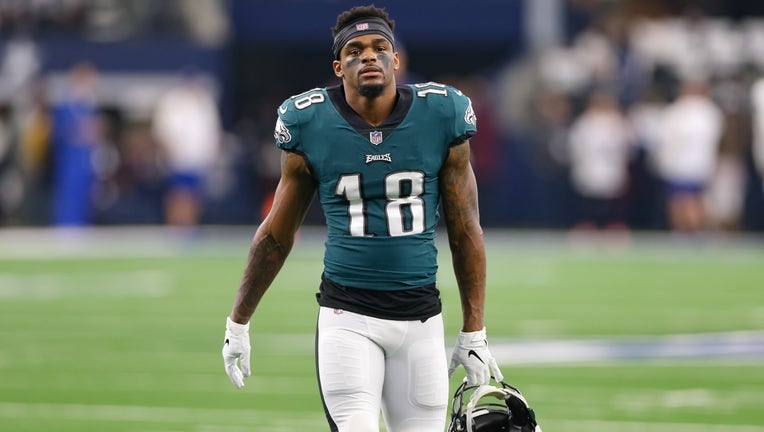 Philadelphia Eagles Wide Receiver Shelton Gibson (18) warms up prior to the game between the Philadelphia Eagles and Dallas Cowboys on December 9, 2018 at AT&T Stadium in Arlington, TX. (Photo by Andrew Dieb/Icon Sportswire via Getty Images)

PHILADELPHIA - The Philadelphia Eagles have placed Pro Bowl guard Brandon Brooks on injured reserve after he suffered a shoulder injury that will require surgery.

Brooks suffered a separated shoulder during Sunday’s division-clinching win over the New York Giants. He becomes the latest in a long line of Eagles to head to IR this season.

Gibson spent two seasons with the Eagles before he was cut in training camp this offseason. The Eagles selected the now 25-year-old in the fifth round of the 2017 draft.

If Gibson suits up for the Eagles in their playoff matchup against the Seattle Seahawks Sunday afternoon, he’ll be part of a receiving corps made up almost entirely of players who were not members of the team’s active roster at the start of the season. Rookie receiver JJ Arcega-Whiteside is the lone exception.

Rookie running back Miles Sanders also went down with an ankle sprain Sunday afternoon and will be monitored closely this week, according to head coach Doug Pederson.

Cornerback Jalen Mills and tackle Lane Johnson are also dealing with ankle injuries that forced them to miss Sunday’s game against the giants. Mills is considered day-to-day and Johnson was expected to participate in Wednesday’s walkthrough.

Tight end Zach Ertz was also a possible participant in Wednesday’s walkthrough, though he has not yet been cleared to return to action after suffering a rib injury and lacerated Kidney against the Dallas Cowboys in Week 16.