According to Philip Klotzbach, a meteorologist at Colorado State University specializing in Atlantic basin seasonal hurricane forecasts, the last time the Atlantic had higher activity at the same time was in 1971 with six named storms: Edith, Fern, Ginger, Unnamed, Heidi and Irene.

Last month, forecasters predicted that they may run out of traditional hurricane names due to high activity and see about twice as much storm activity as a normal year.

Experts say hurricanes are getting stronger for several reasons, and nasty hurricanes that cause billions of dollars in damage are hitting more often.

Hurricane Paulette made a rare landfall in Bermuda Monday and strengthened into a Category 2 storm just hours after the British territory shuttered schools, government agencies and air and sea ports.

The eye of the storm passed over the island as government officials warned of heavy flooding given that the hit coincided with an unusually high tide. Fewer than 10 hurricanes have made direct landfall on the tiny island in the middle of the Atlantic since the National Hurricane Center began tracking such disasters in the 1850s.

As of Monday evening, Paulette was moving away from Bermuda to the north-northeast at 15 mph. It had maximum sustained winds of 105 mph, according to the center.

Forecasters said the island would experience hurricane-force winds for roughly seven hours. Power was out across much of the island.

A video filmed by Ted Anthony L Bagsican on Monday showed rain and wind lashing Hamilton, the capital of Bermuda.

National Security Minister Renee Ming urged people to stay indoors and reminded the more than 70,000 people who live on the island to protect themselves given the COVID-19 pandemic.

“You should be hunkering down to ride out the storm,” Ming said during a news conference on Sunday. “We’ll see you on the other side, safe.”

Bobbi Singh, who has lived in Bermuda for eight years, told The Associated Press that while she has been through a few hurricanes, every storm brings concerns.

“The biggest challenge was preparing in the midst of COVID-19,” she said. “It gave us more the think about when heading out to get supplies in crowded places.” 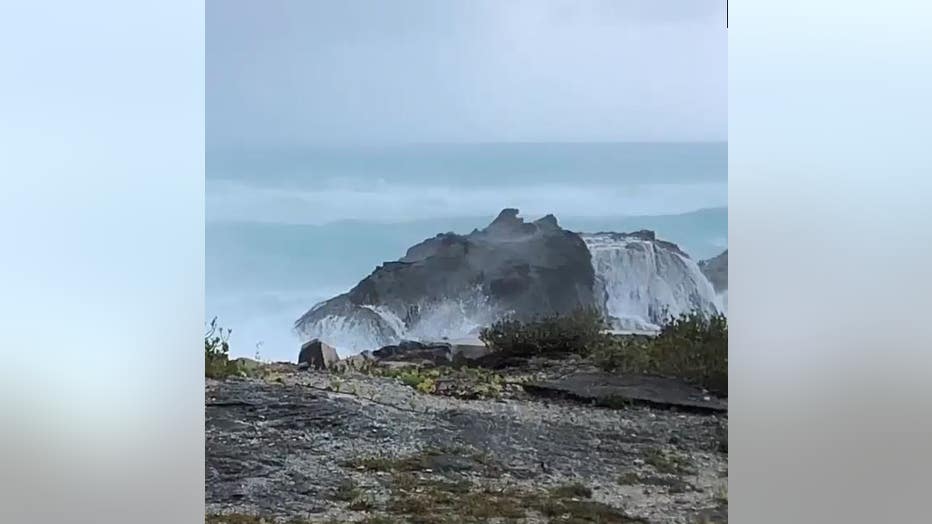 Faith Bridges, the owner of Aunt Nea’s Inn, a hotel along the island’s northern tip, told The Associated Press by phone that she had finalized all preparations by Sunday and given her guests flashlights, warning them the power would go out. But she was not worried.

“We obviously have to prepare, but we’re built for it,” she said.

RELATED: Hurricane Alpha? With amped up season forecast, names may run out

Ming said she expects the international airport will reopen by Tuesday afternoon as officials warned people to stay off the roads after the hurricane given the possibility of downed power lines.

On Monday, the National Hurricane Center said the eye of of Paulette would gradually move away from Bermuda out into open water. However, hurricane and tropical storm conditions, storm surge and very heavy rainfall will continue through Monday.

“Swells produced by Paulette are affecting portions of the Leeward Islands, the Greater Antilles, the Bahamas, Bermuda and the East Coast of the United States. These swells could cause life-threatening surf and rip current conditions,” NHC wrote.

Meanwhile, storm-weary Gulf Coast residents rushed to finish last-minute preparations Monday as Hurricane Sally chugged slowly through warm Gulf waters. Forecasters said the biggest threat is flooding, with as much as two feet of rain falling in some areas.

As of Monday evening, Sally strengthened to a Category 2 storm packing winds of 100 mph.

“The bottom line continues to be that Sally is expected to be a dangerous slow-moving hurricane near the coast of southeastern Louisiana, Mississippi and Alabama during the next 2-3 days," the NHC said early Monday.

Jeremy Burke was lifting things off the floor in case of flooding in his Bay Books bookstore in the Old Town neighborhood of Bay St. Louis, Mississippi, a popular weekend getaway from New Orleans, about 60 miles to the west. The streets outside were emptying fast.

“It’s turning into a ghost town,” he said. “Everybody’s biggest fear is the storm surge, and the worst possible scenario being that it just stalls out. That would be a dicey situation for everybody.”

The National Hurricane Center said it was too early to tell exactly where Sally would come ashore, because it’s still not known when it would make a turn to the north.

Sally was upgraded to a Category 1 hurricane as flooding hit Dauphin Island, Alabama, on Monday. The NHC warned of coastal flooding and “dangerous” storm surge.

Meteorologist Stephanie Weaver and Storyful contributed to this article.