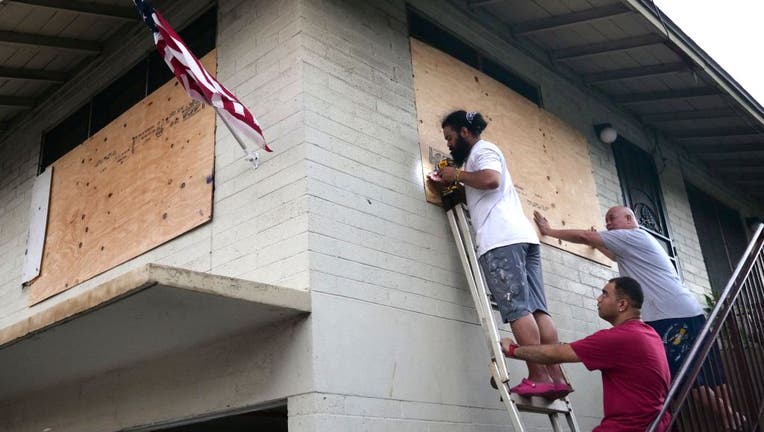 (From L) Mapu Obrien, Jack Obrien, and Masta Obrien board up the windows of their home in preparation for hurricane Douglas in Honolulu, Hawaii, on July 25, 2020. (Photo by RONEN ZILBERMAN/AFP via Getty Images)

HONOLULU (AP) - Hawaii avoided a direct hit Monday from Hurricane Douglas and the Category 1 storm was swirling just north of the island chain.

The Central Pacific Warning Center lifted the hurricane warning for the island of Kauai, the final remaining hurricane warning in place for the nation’s only island state. There were no initial reports of injuries and what damage there was appeared to be minor.

The storm tracked just north of the islands, and officials said it appeared to pass about 45 miles (72 kilometers) north of Maui and possibly closer to Oahu.

“Not only did it did it not make landfall, it skirted by the islands,” National Weather Service meteorologist Chevy Chevalier.

It's rare for hurricanes to hit the islands and their small size compared to the vastness of the Pacific Ocean plays a role.

“The islands are so small,” Chevalier said. “You’re not going to see them get hit that often.”

Warning sirens sounded over Honolulu, Hawaii, as residents braced for the potential impact of Hurricane Douglas on July 26. (Credit: Dara Young via Storyful)

The hurricane's rain showers “fell apart” with Oahu not receiving much rainfall, he said. Kauai was under a flood advisory because the island received heavier rain.

Douglas gained some strength as it spun past Hawaii and headed west-northwest into the Pacific Ocean at 16 mph (26 kph).

Early Monday, Douglas was 60 miles (95 kilometers) northwest of Lihue, Kauai. It had maximum sustained winds of 90 mph (150 kph), keeping it as a Category 1 hurricane.

On Sunday, heavy rain and wind lashed Maui, downing a small tree on the Hana Highway.

As the storm moved west across the island chain from Maui, gentle rain fell and blustery winds swayed trees on Oahu, home to the state’s biggest city, Honolulu. Sand and debris washed ashore on a two-lane coastal road.

Despite the dangers, surfers rode waves and residents took selfies at a lookout point next to the ocean.

National Weather Service meteorologist Eric Lau said Douglas would have been a lot worse if it had tracked 20 or 30 miles (32 to 48 kilometers) to the south.

“We were really playing with a really fine line, a razor thin line between what we’ve experienced today compared to what we could have experienced,” he said.

Duke Stevens, who lives in Hana on Maui’s eastern tip, said there was no longer any wind by Sunday afternoon and the light rain that fell persistently through the night had subsided.

Antonia Hall, from the city of of Kihei where on western Maui, said the storm avoided her area after she brought her porch furniture inside, bought nonperishable food and filled her bathtub for an emergency water supply

“Maui has skirted so many hurricanes,” she said. “This is just kind of something we go through here.”

About 300 people on Oahu island evacuated to the Hawaii Convention Center on the edge of Waikiki while about 22 people on Maui stayed at five shelters around the island.

Evacuees were told to bring masks and hand sanitizer along with the usual emergency supplies of food and water. People had to wear face coverings to be admitted and while staying in the shelters except when eating, drinking or sleeping.

Many hurricane warnings were canceled for Hawaii on July 26, as Hurricane Douglas skirted the state, with several flood warnings still in place. (Credit: Hawaii Department of Transportation via Storyful)

State health department officials contacted each of the 625 people who were currently in isolation or quarantine as of Friday because they were either COVID-19 positive or had been in contact with someone who is. All said they would shelter-in-place and not seek refuge at a hurricane shelter.

Hawaii has some of the lowest coronavirus infection rates in the nation, but COVID-19 numbers have gone up in recent weeks.

President Donald Trump issued an emergency declaration for Hawaii because of the hurricane, directing federal assistance to supplement state and local response efforts.

Hawaiian Airlines canceled all Sunday flights between Hawaii and the U.S. mainland and also between the islands.

A tropical storm warning was in effect for Portions of the Papahanaumokuakea Marine National Monument from Nihoa to French Frigate Shoals to Maro Reef.