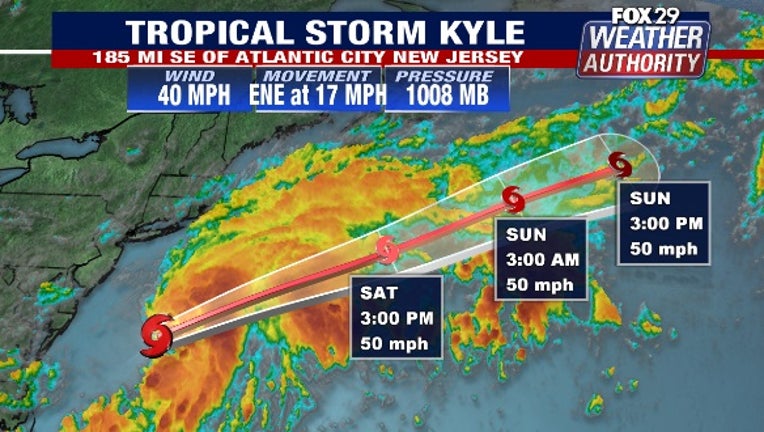 MIAMI - Josephine continued to just barely hold on to its tropical storm status Friday as Tropical Storm Kyle formed in the Atlantic Ocean off the coast of New England, packing winds near gale force but with no major population centers in its projected path.

Kyle was about 185 miles (300 kilometers) southeast of Atlantic City, New Jersey, with maximum sustained winds of 40 mph (65 kph), the U.S. National Hurricane Center in Miami said. It was moving east-northeast at 17 mph (27 kph) and was expected to move quickly away from land over the next few days, the center said.

Tropical storms have maximum sustained winds between 39 and 73 mph (63 and 117 kph). No coastal watches or warnings were in effect.

Josephine had maximum sustained winds of 40 mph (65 kph) and was about 460 miles (740 kilometers) east of the northern Leeward Islands, the U.S. National Hurricane Center. Josephine was expected to weaken over the weekend, forecasters said. No coastal watches or warnings were in effect.

So far this year, Cristobal, Danielle, Edouard, Fay, Gonzalo, Hanna, Isaias and Josephine have set records for being the earliest named Atlantic storms of their respective place in the alphabet. Only Hanna and Isaias this year have developed into hurricanes.

Isaias killed two people in the Caribbean earlier this month. Several others across multiple U.S. states were then killed when the storm made landfall in North Carolina and moved through the East Coast, leading to floods, tornadoes, fires, and widespread power outages.

Last month, Hurricane Hanna slammed the Texas Gulf Coast with high winds and rains that flooded streets and knocked out power across the region.