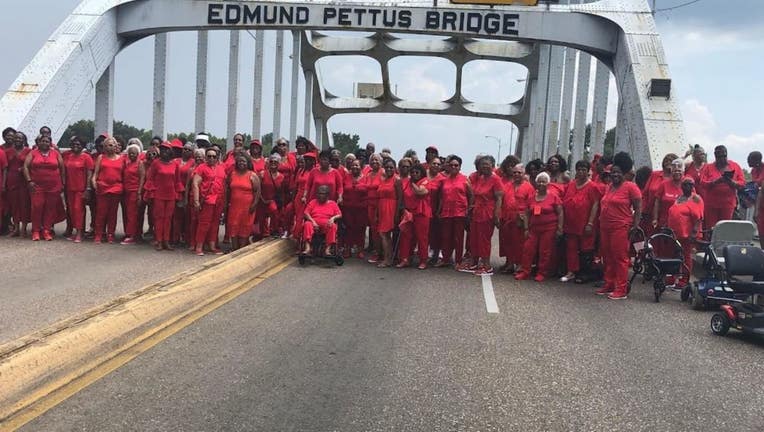 SELMA, Alabama - More than 100 African-American Bay Area women stood on the historic Edmund Pettus Bridge in Selma, Alabama on Monday, bracing the wind, rain and lightning in a literal and symbolic milestone highlighting their emotional civil rights tour that kicked off from Oakland.

"We really had a sense of what our ancestors went through," said "Ladies in Red" founder Brenda Knight, 67, a former Oakland resident who organized the six-day trip for the senior group. "The heat, the lightning, the pain. You know they were uncomfortable. It was quite an unforgettable experience."

The ladies wore red hats, shirts, pants, and sneakers for the photo shoot, leaving their wheelchairs and walkers on the side of the bridge, named after a former Confederate brigadier general and grand wizard of the Alabama Ku Klux Klan.

"Ladies in Red" civil rights tour takes off from Oakland

Specifically, the bridge was the site of Bloody Sunday on March 7, 1965 when armed police attacked civil rights demonstrators, including Dr. Martin Luther King Jr., with billy clubs and tear gas as they were attempting to march to the state capital, Montgomery. The bridge is still in use to day and was named a National Historic Landmark in 2013.

"It was extremely emotional," Lorraine Caldwell, 72, of Alameda told KTVU by phone on Tuesday.

"What all those people did for us," Esponila Johnson, 66, of Oakland, said. "It was such a heartwarming experience."

And Mary Amos, 80, of Oakland said: "I was born in Texas. I know what Jim Crow is. The commitment and the sacrifice for what we enjoy today. It was all very moving."

While the "Ladies in Red" group has gone on civil rights tours around the country before, this is their first stop to Alabama. Their goal was to retrace the steps of the civil rights leaders they grew up watching on TV and retrace their steps in real life.

Knight started "Ladies in Red" as a self-help group for women who had survived breast cancer  and it has evolved into an empowerment group, especially appealing to older women.

The group returns to the Bay Area on Tuesday.