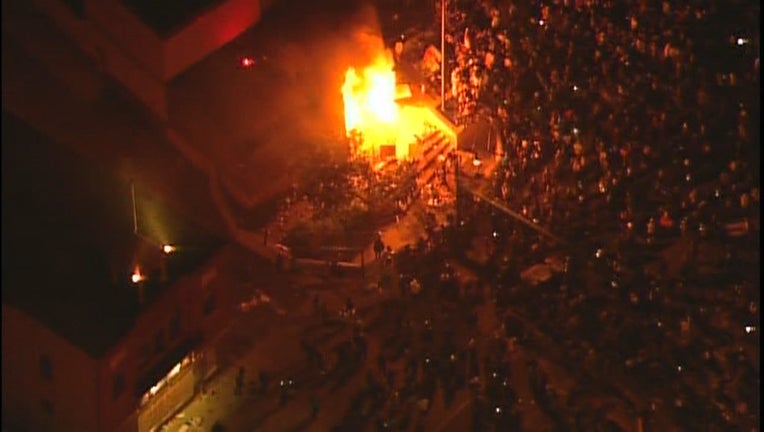 MINNEAPOLIS (FOX 9) - Four Minnesota men are now federally indicted in connection to the arson of the Minneapolis Police Department's Third Precinct, which was damaged during the riots following the death of George Floyd.

The Fall of the Third Precinct

A minute-by-minute account of a pivotal moment following the death of George Floyd in Minneapolis.

According to the indictment, the four men were among a crowd of hundreds that gathered outside of the Third Precinct on May 28. At one point, people in the crowd started chanting, "Burn it down." A fence surrounding the building was torn down. Robinson, Turner, Williams and Wolfe along with others -- who are still unidentified -- breached the fence and went into the building.

At one point, Robinson lit an incendiary device and threw it toward the building, according to the indictment. Williams and Turner lit a Molotov cocktail, which Turner brought into the precinct to start a fire. Wolfe pushed a barrel into a fire at the entrance of the building to help the fire grow.

Formal detention and arraignment hearings will be scheduled at a later time.

Anyone with information regarding the Third Precinct fire or other business fires in the Twin Cities can call 1-888-ATF-TIPS (1-888-283-8477), email ATFTips@atf.gov or submit information anonymously via ReportIt.com. In addition to fires, the FBI is looking for people who may have incited or promoted violence of any kind. Anyone with photos, video or tips can call 1-800-CALLFBI (800-225-5324) or submit images or videos at FBI.gov/violence.

"Today's indictment charging four individuals with conspiracy to commit arson serves as a warning to those who commit crimes high-jacking peaceful protests protected by the First Amendment. By working together to ferret out these criminal elements, law enforcement partners are making it safer for citizens to exercise their legitimate First Amendment rights in Minneapolis and across the country. The FBI is committed to identifying violent actors and ensuring they face the consequences of their actions."