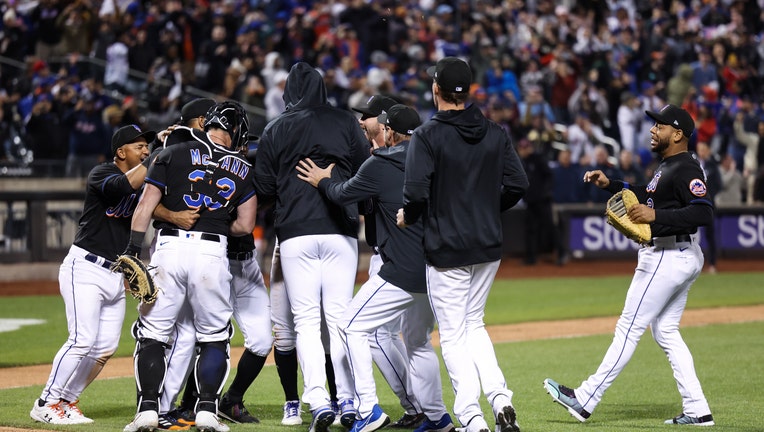 NEW YORK, NEW YORK - APRIL 29: The New York Mets celebrate after completing a combined no-hitter during the 3-0 victory over the Philadelphia Phillies at Citi Field on April 29, 2022 in New York City. (Photo by Dustin Satloff/Getty Images)

Megill was pulled after five innings and 88 pitches. The bullpen took over from there, with Drew Smith, Joely Rodríguez, Seth Lugo and Edwin Díaz completing the second no-hitter in Mets history.

With the crowd of 32,416 standing and chanting "Let’s go, Mets," Díaz finished it off in style, striking out Bryce Harper, Nick Castellanos and J.T. Realmuto in the ninth — all of them swinging.

Johan Santana threw the Mets’ only previous no-hitter on June 1, 2012, when he struck out eight and needed 134 pitches in an 8-0 win over the St. Louis Cardinals. The Mets began play as an expansion team in 1962 and this was their 9,499th regular-season game.

The Mets poured on to the field and mobbed Díaz after the final out as a graphic picturing the five pitchers with the words "BLACK OUT" showed on the scoreboard.

It was the 17th combined no-hitter in history and the first since the Milwaukee Brewers’ Corbin Burnes and Josh Hader teamed up to no-hit Cleveland last Sept. 11.

A year ago, there were a record nine no-hitters in the majors.

Last weekend, six Tampa Bay Rays pitchers combined to carry a no-hit bid into the 10th inning of a scoreless game against the Boston Red Sox. The Red Sox broke up the no-hitter and scored twice in the top of the 10th but the Rays came back to win 3-2. By official MLB rules, it did not count as a no-hitter because Rays pitchers didn't end the game allowing no hits.

This was the first no-hitter against the Phillies since Josh Beckett pitched one for the Los Angeles Dodgers in 2014.

Megill (4-0) struck out five and walked three in his 23rd major league start. Smith got four outs, Rodriguez got three and Lugo recorded the last two outs in the eighth before Díaz took over.

Jeff McNeil hit a two-run single in the fifth off Aaron Nola (1-3). Pete Alonso homered with two outs in the sixth.

The meeting was scheduled for last week but was delayed when Showalter underwent a medical procedure April 20. The two sides convened two days after the Mets — whose players entered Friday having been hit by pitches 19 times, the most in the majors — and St. Louis Cardinals engaged in a benches-clearing skirmish after New York’s Yoan Lopez threw up and in on Nolan Arenado a half-inning after J.D. Davis was hit in the ankle by a Genesis Cabrera offering.

"We had our pitchers in there and some position players — we got all aspects of it," Showalter said. "Morgan presented some things that (players) may not have known about and (players) presented some things. That’s how you make good decisions: You listen to the people that are actually throwing the baseball and hitting the baseball and you listen to the people who are doing all the work to improve our game."

Mets: Davis (left ankle) was available off the bench. "So far so good," Showalter said. "There wasn’t a need for some more imaging. It’s improved."

Phillies: RHP Kyle Gibson (2-1, 3.47 ERA) is looking to win his second straight start after earning the victory against the Colorado Rockies on Monday.

Mets: RHP Taijuan Walker (0-0, 0.00 ERA) is expected to be activated from the injured list. He was shelved with right shoulder bursitis on Apr. 12, one day after tossing two perfect innings against the Phillies in his season debut.