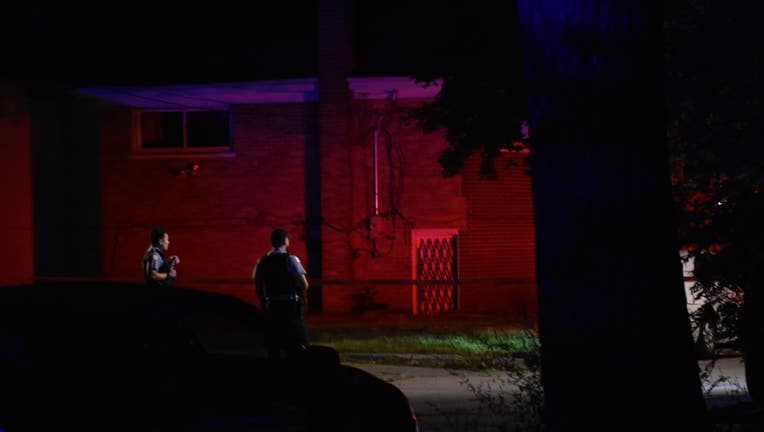 CHICAGO - Ten people were killed and 60 others, including 10 minors, were wounded in shootings across Chicago over the weekend.

The numbers surpassed those of the same weekend last year, when 43 people were shot, three of them fatally.

Last weekend, 64 people were shot across the city, 13 of them fatally. Six of those victims were teenagers and one teen was killed.

The latest fatal shooting killed two men and wounded three others late Sunday night in Morgan Park on the Far South Side.

The shooting happened about 11:52 p.m. in the 11300 block of South Carpenter Street, Chicago police said. A group of people were outside when someone fired shots. A 26-year-old and 41-year-old man suffered fatal gunshot wounds.

Another 26-year-old, man a 37-year-old man and a 48-year-old man were also struck by bullets and taken to area hospitals, police said. The younger man was in critical condition.

A shooting about an hour earlier left a man dead in Chatham on the South Side.
About 10:45 p.m., the 21-year-old was standing outside a vehicle in the 8200 block of South Cottage Grove Avenue when he was shot in the back as another vehicle drove by, police said. The man was taken to the University of Chicago Medical Center, where he died.

Earlier, a man was killed in Little Village on the Southwest Side.

The 20-year-old was shot about 2:55 a.m. in the 3200 block of West Cermak Road, according to police. He was dropped off at Mount Sinai Hospital with gunshot wounds to his right cheek and the right side of his abdomen and pronounced dead a short time later.

About 20 minutes before that, a man was killed and a woman was injured in the Loop.

They were in a vehicle heading north in the 300 block of North Wabash Avenue about 2:35 a.m. when they saw a group of males on the east side of the bridge over the Chicago River arguing with someone in the middle of the street, according to police. The male in the street fired a handgun toward the group, but hit the man and woman in the vehicle. The victims drove to the first block of East Wacker Drive, where they flagged down police officers and asked for medical attention.

On Saturday morning, a man was shot to death in Humboldt Park on the West Side.
Anji Webster, 26, was shot multiple times at 6:28 a.m. in the 3400 block of West Ohio Street, authorities said. He was pronounced dead at the scene.

About three hours earlier, another man was killed in Little Village.

Miguel Rios, 18, was driving south on Washtenaw Avenue at 3:28 a.m. when someone shot at him, authorities said. He was struck in the armpit and crashed the vehicle into a tree in the 2600 block of West 24th Street. Rios, who lived in Gage Park, was pronounced dead at the scene.

Less than 20 minutes before that, one man was fatally shot and four other people were injured in Lawndale on the West Side.

The group was standing on the sidewalk and street at 3:12 a.m. in the 1600 block of South Keeler Avenue when two males fired shots, officials said. Twan Thigpen, 25, was shot in the chest and taken to Mount Sinai Hospital, where he was pronounced dead.

Nearly two hours earlier, a 67-year-old man was fatally shot in Austin on the West Side.

Jimmy Blumingburg was walking on the sidewalk about 12:30 a.m. in the 4900 block of West Hubbard Street when someone fired shots from a vacant lot, officials said. Blumingburg was shot in the neck and pronounced dead at Stroger Hospital.

The weekend’s earliest homicide killed one man and injured another Friday night in Chatham on the South Side.
They were in a first floor apartment about 9:52 p.m. in the 8200 block of South Drexel Avenue when a male kicked in the door and opened fire, authorities said. Derek Teague, 60, was shot in the neck and pronounced dead at the scene. He lived in Bronzeville.

A 23-year-old man was hit in the arm and taken to the University of Chicago Medical Center in fair condition, according to police.

Two preteen boys were among three people shot Sunday afternoon in Gresham on the South Side.

Multiple people were sitting outside a home in the 8200 block of South Ada Street when someone opened fire from a vehicle just after 4:30 p.m., according to police. The boys, 10 and 11, were both taken to Comer Children’s Hospital in good condition. The 10-year-old was shot in the ankle and calf, while the 11-year-old was struck in the arm.

A 27-year-old man was shot in the leg and arm and taken to the University of Chicago Medical Center, where he was also in good condition, police said.

Two boys who were with relatives to honor a 2018 murder victim on Sunday afternoon in Chicago's Auburn Gresham neighborhood were shot and wounded.

He and two men, 19 and 26, were walking in an alley about 9:32 p.m. in the 100 block of North Keeler Avenue when someone in a dark sedan unleashed gunfire, police said. All three people were hospitalized in good condition. The teen was struck in the leg and taken to Stroger Hospital. The 26-year-old man was shot in the ankle and taken to the same hospital. The 19-year-old man was grazed in the face and was taken to Norwegian-American Hospital.

A 14-year-old boy was shot Saturday night in Gresham on the South Side.

He was on the sidewalk about 9:30 p.m. in the 7600 block of South Green Street when someone approached with a handgun and fired shots, according to police. The teen was hit in the upper right side of his back and his right shoulder and taken to the University of Chicago Medical Center in good condition.

Saturday afternoon, two boys were shot during a dice game in Lawndale.

The teens, 14 and 17, were playing dice about 3:35 p.m. on a sidewalk in the 1500 block of South Sawyer Avenue when someone in a vehicle pulled up and opened fire, police said. The 17-year-old was shot in the groin and the 14-year-old was struck in the buttocks. Both were taken to Mount Sinai Hospital, where they were in good condition.

Another teenage boy was shot early Saturday at a gas station in Belmont Central on the Northwest Side.

The 17-year-old was pumping gas at a gas station about 2:35 a.m. in the 5500 block of West Diversey Avenue when someone fired shots from a black SUV, according to police. The boy was shot in the back and taken to Community First Medical Center. He was transferred to Stroger Hospital in fair condition.

About an hour and a half before that, another 14-year-old was wounded in Albany Park on the Northwest Side.

The boy was shot in the left hand at 12:58 a.m. in the 3600 block of West Argyle Street, police said. He refused to tell police about the circumstances of the shooting. He was dropped off at Swedish Covenant Hospital and transferred to Lurie Children’s Hospital in good condition.

On Friday night, another teen was shot in Englewood on the South Side.

The 17-year-old was standing on the sidewalk about 9:47 p.m. in the 6900 block of South Lafayette Avenue when someone fired shots from a black sedan, police said. The boy was struck in the leg and arm and was taken to the University of Chicago Medical Center in fair condition.

The weekend’s first shooting wounded three people, including a 14-year-old boy, in Chatham.

The trio was on the sidewalk about 5:30 p.m. in the 8200 block of South Drexel when a vehicle drove up and someone inside opened fire, police said. The teen was struck in the face and taken to Comer Children’s Hospital. A 21-year-old man was struck in the arm, and a woman, 27, was shot in the buttocks. They were taken to the University of Chicago Medical Center.

Chicago fire officials said the trio was transported in serious-to-critical condition but stabilized at the hospital.

Two people were injured in expressway shootings in Chicago on Saturday.

One person was shot just before 5 a.m. on Interstate 90/94 on the Ontario feeder ramp on the Near North Side, state police said. Responding officers found one person with a non-life threatening gunshot wound. That person was taken to an area hospital for treatment.

Saturday afternoon, another person was shot on Interstate 57 in Morgan Park, state police said. Troopers responded about 1:30 p.m. to reports of the shooting, and found a driver with life-threatening injuries; their passenger wasn’t hurt.

Three people were wounded in a single shooting Friday night in Roseland on the South Side.

They were hanging out on the sidewalk about 9:35 p.m. in the 10900 block of South Wentworth Avenue when someone fired shots from a red sedan, police said. Two 49-year-olds were each struck in the leg and taken to Christ Medical Center in Oak Lawn in good condition. The third man, 42, was shot in the foot and taken to Roseland Community Hospital in good condition.

At least 31 other people were injured by gunfire throughout Chicago between 5 p.m. Friday and 5 a.m. Monday.