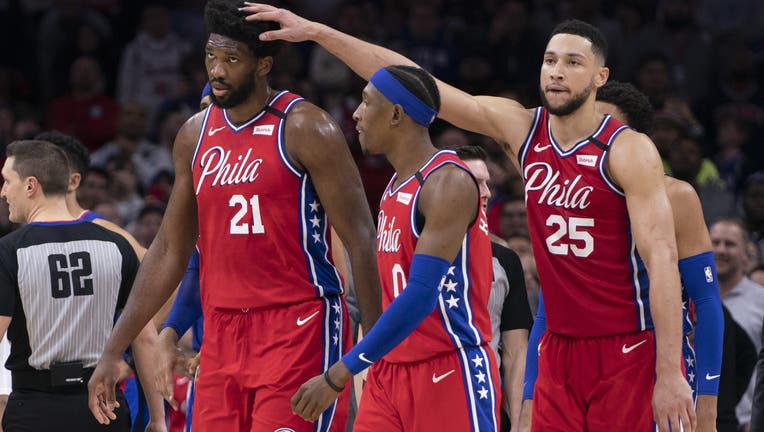 Joel Embiid #21, Josh Richardson #0, and Ben Simmons #25 of the Philadelphia 76ers react against the Los Angeles Clippers at the Wells Fargo Center on February 11, 2020 in Philadelphia, Pennsylvania. The 76ers defeated the Clippers 110-103. (Photo by

Joel Embiid “hated the idea” of returning to play at Walt Disney World.

“All I want is to stay healthy, stay safe, keep the people around me safe,” the Philadelphia 76ers’ All-Star said. “I want to be sure that I can live for a long time and not have any sort of, I don’t know, consequences for the future.”

Embiid even dressed the part worthy of his fear factor, arriving for Philly’s flight to Florida in what appeared to be a full hazmat suit. Embiid wants to return happy, healthy and hoisting a trophy for that -- virtual, no doubt -- overdue party in Philadelphia.

“I feel like we have a great chance of winning a championship,” he said.

The Sixers felt that way for the last three season. This one unraveled as Embiid and fellow All-Star Ben Simmons battled injuries. Free agent signee Al Horford seemed out of place from the start, even moved out of the starting lineup as he struggled. Brett Brown appeared to be coaching for his job when the NBA suspended the season on March 11. At 39-26 the Sixers were a lock for the playoffs. But as a title contender, they were on the bubble well before they entered one to resume the eight-game season for seeding Aug. 1 against Indiana.

But there is reason for optimism.

Embiid has had months to recover from surgery on his left hand and shoulder and spent the break working his way into what the Sixers believe is the best shape of his career. The 24-year-old Simmons, the NBA’s leader in steals, said his nagging back injury has gone away and he’s ready to roll. Simmons will open the break at power forward and Shake Milton gets the run at point. Brown tried it in the 2019 postseason when he let former Sixer Jimmy Butler run the offense. Simmons could still end up as a point-forward hybrid and have the ball in his hands plenty -- just don’t expect him to shoot many 3s.

Brown said the Sixers are “built for the playoffs.”

“I felt everything was pointing to us landing the plane, getting good health and letting that environment be Judgment Day,” Brown said. “I feel very confident, and respectfully cocky, that we’ve done good work.”

All the Sixers say they are ready and need the ramp-up period to adjust to a slightly new starting lineup. Milton, Josh Richardson, Tobias Harris, Simmons and Embiid are expected to get the call for the restart. Embiid missed 21 games this season and Richardson 17 to -- combined with Simmons’ late-season absences -- made the Sixers as injury-prone as any playoff team in the league. Stay healthy, and the Sixers could be scary.

Simmons had missed his eighth straight games and was receiving daily treatment for nerve issues in his lower back when the season stopped. Simmons says now he’s “feeling better than I was at the start of the season” and there’s a social media collection of dunks to state his case. Without Simmons, the Sixers went 4-4 over that stretch, stuck in the kind of basketball purgatory that didn’t excite their championship chances. Simmons’ last game was Feb. 22, when he took such a hard fall in Milwaukee that he was left lying on his back, vomiting from the pain.

ON THE ROAD AGAIN

The Sixers are officially playing neutral-site games, just as the other 22 teams will do in Florida. But if bags are packed, then call it a road game -- and the Sixers could be in trouble. The Sixers were a stunning 29-2 at home, highlighted by a Christmas romp over the best in the East, Milwaukee. But a 10-24 mark on the road left the Sixers in sixth place in the Eastern Conference once the season stopped.

Matisse Thybulle emerged as more than a key rookie rotational player for the Sixers. He’s been an early hit at Walt Disney World because of his social media videos that give a sneek peek into the league’s restart bubble. He playfully calls Harris “a freaking bully” for snatching a Rubix’s cube out of his hands, shows how he edits his own videos (“this is where the magic happens”) and practices getting his temperature taken.