Arizona is considered a swing state ahead of 2020 presidential election

Arizona is transforming rapidly and is increasingly becoming known as a key battleground state.

LOS ANGELES - Could Arizona turn blue in the 2020 presidential election?

The state has long been considered reliably red and has almost exclusively chosen Republicans in presidential elections. But that could change this year, experts say. Arizona is transforming rapidly and is increasingly becoming known as a key battleground state ahead of the 2020 election.

The prospect of Arizona as a wild card in the upcoming election has brought a great deal of attention to the Grand Canyon state. Experts believe the state has already changed from red to purple — and potentially to blue come November 2020.

But for a long time in Arizona, Republican domination was apparent.

Arizona was the last of the 48 contiguous states to be added to the union in 1912.

Since the mid-20th century, the state of Arizona has voted Republican in every presidential election since Bill Clinton’s win in 1996.

In fact, Clinton is the only Democratic candidate to have won the state in the presidential election since Democrat Harry S. Truman was elected in 1948. 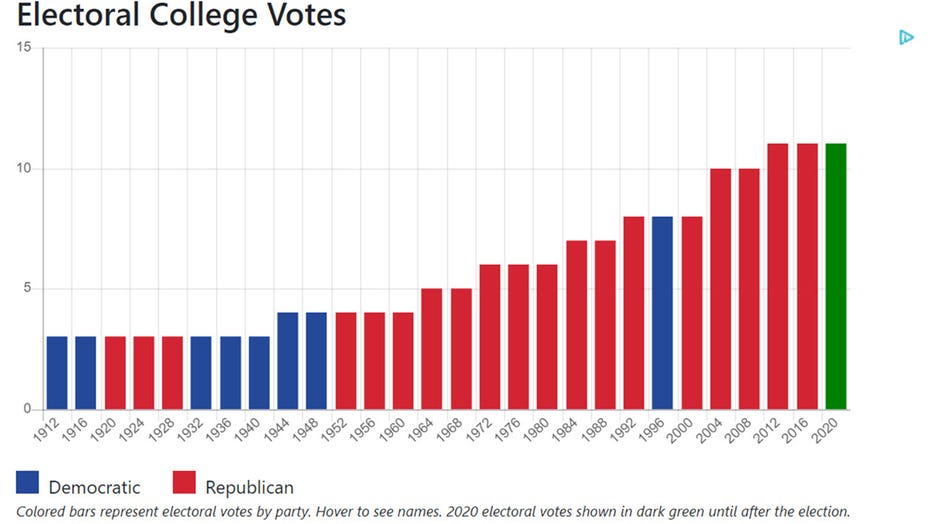 GOP officials, including five-term Sen. Barry Goldwater and Sen. John McCain, who served as an Arizona senator from 1987 until his death in 2018, became iconic staples in the state’s politics, cementing Republican favoritism in the state.

According to FiveThirtyEight, a website dedicated to political polls and analysis, Democrats failed to win a statewide election in Arizona on any level after 2008 until 2018.

Republican power was still visible in the 2012 presidential election, when U.S. Senator Mitt Romney beat Barack Obama in Arizona 54.2% to 44.1%.

And little changed after the 2016 general election, when 41% of Arizona voters identified as conservative, 32% said they were moderate, and 27% identified as liberal, according to 2016 exit polls.

Trump also had a big lead in Arizona among older voters in the 2016 election. More than half of Arizona voters age 65 and older said they had cast a ballot for him, according to the Associated Press.

But the trend is changing, and it’s changing rapidly

In 2018, four Democratic candidates won in the state, including Kyrsten Sinema, the first Democrat to win a Senate race in Arizona since 1988.

“We saw in 2018 that our state is turning purple,” Regina Romero, the first female and Latina mayor of Tucson said after being elected to the position in 2019. Tucson, which is Arizona’s second largest city and considered Arizona’s more liberal counterpart, has had a Democratic mayor in office since 2011.

Experts believe the state has already changed from red to purple — and potentially to blue come November 2020.

“There is some indication that we may have already turned purple two years ago when Kyrsten Sinema won the Senate race. It looks like that trajectory, that momentum towards purple status has continued since then,” Volgy said.

And another Democrat could take an Arizona Senate seat in 2020.

Now, across the state, more than half (five) of Arizona’s nine congressional seats are held by Democrats.

Could President Donald Trump face a fight in a state where Republicans have long dominated?

Recent polls indicate that he could. 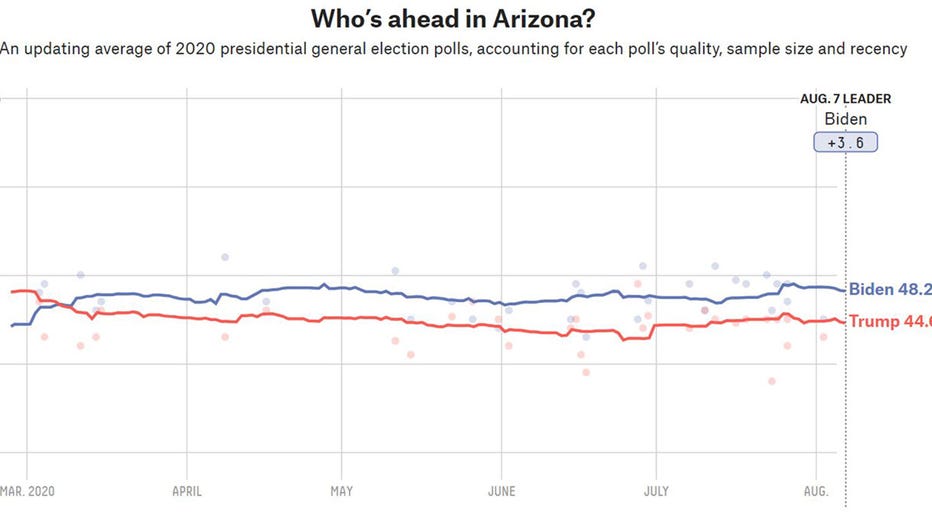 Based on the most recent polls, Biden, the presumptive Democratic nominee, may have a chance at securing and winning Arizona’s 11 electoral votes.

But Volgy said a lot of things can change in 90 days. “There’s going to be a lot of pressure in here. It’s going to be an enormous amount of money spent particularly on the Republican side in Arizona, because the fear that losing Arizona may mean losing the Electoral College.”

What is driving the political shift in Arizona?

Arizona’s state population and demographics have changed significantly over the past few decades.

According to Census.gov, Arizona’s population has shown rapid growth, increasing 13.9% between April 2010 and July 2019. That’s an increase of nearly 1 million people in the state.

“We are no longer in the state that we were 20 years ago, ” Volgy said.

The number of electoral votes Arizona holds has nearly tripled from four in 1960. According to Election Data Services, the Grand Canyon state is on track to earn another seat after the 2020 election.

Another trend is the change in demographics due to migration and in-migration.

“Phoenix politically has moved very, very fast towards a much more moderate to liberal perspective, and the number of independents in the state of Arizona has really surged, and if there is a key to Arizona, it is that change in demographic,” Volgy added.

Primary migration patterns into Arizona initially used to be from the Midwest and the East, but that continues to change, triggering the shift in political ideologies at large. “Now California has replaced a substantial part of that, and that is probably also a significant part of this,” Volgy said.

Of arguably even larger significance is the increase in Latinos in the state.

Arizona’s Maricopa County, which includes the Phoenix Metro area, had the largest growth (2.5%, or 34,358) in the United States among Hispanics and Latinos between 2018 and 2019.

The demographic increase may be part of the reason why Arizona could turn blue.

Trump did not do well among Hispanic and Latino voters in the 2016 general election.

Exit polls indicate that Trump only received 31% of the vote among Hispanics, compared to 61% for Clinton. More surprising, according to the Latino Decisions 2016 Election Eve Poll, 84% of Latinos in Arizona voted for Hillary Clinton in the 2016 presidential election, while only 12% voted for Trump.

According to analysis from the Center for American Progress, in 2016, “Latinos increased their share of voters by 2 points, reflecting both higher turnout—up 5 points—and a rapid increase in their share of eligible voters, now more than 22 percent,” relative to 2012.

Currently, about one-third of the state is Hispanic, 5% African American, 5% Native American and 4% Asian-American. The demographic trends indicate that Arizona could acquire majority-minority status over the next few years, joining only five other states with the designation.

Maricopa County, which includes Phoenix, Scottsdale, Mesa, Chandler and Tempe, is the largest county in Arizona and accounts for the majority of the state’s votes.

Volgy said sections of Maricopa County have changed dramatically, but other parts have not.

RELATED: 'Get out of your basement, Joe': Gov. Ducey, Joe Biden feud over state of coronavirus in Arizona

The change was evident in 2019, when Democratic Mayor Kate Gallego was elected, becoming the second elected female mayor in Phoenix’s history, and one of the youngest big-city mayors in the country.

“That would probably have been unheard of 10, 15 years ago,” Volgy said.

“This process of change in Phoenix has been probably the most dramatic part that has been going on in Arizona,” Volgy said.

In Arizona, which is considered a large retirement state, older voters are also a significant impact to Arizona’s votes, but even some older voters are dropping Republican support. In July, a national poll by Quinnipiac University found Biden leading by 14% over Trump in voters 65 and older.

There are a number of different factors and events which are contributing to the political shift in Arizona, but Volgy said the COVID-19 pandemic has made a significant difference.

“There’s absolutely no doubt that that’s true, and it has significantly cut into his [Trump’s] critical base — both in terms of elderly voters and also in terms of suburban households,” Volgy said.

Volgy added, “Arizona was 33rd, 34th in the number of cases four months ago, and about 30th in terms of the death rate. We are now third in the nation in terms of cases. Over the last two-and-a-half weeks, we were between second and third in terms of deaths per capita. It’s angered an enormous number of people in terms of the handling of the coronavirus."

As of August 7, Arizona ranked 7th in the nation in terms of confirmed cases and third in the nation per capita, according to the Center for Disease Control and Prevention's COVID Data Tracker.

The COVID-19 pandemic has also affected unemployment rates across the United States and in Arizona.

Coronavirus cases surged after Arizona Gov. Doug Ducey moved to reopen the state in May. In June, Arizona had the highest rate of infection per capita in the country.

After the surge in cases, Ducey was forced to re-close bars and gyms and delayed the re-opening of any classrooms to students in Arizona until at least Aug. 17.

Parents and teachers alike have expressed misgivings about returning to classrooms as the pandemic continues to play out in the state.

Kimberly Chavez Lopez Byrd, who taught in the Hayden-Winkelman Unified School District in Arizona for 38 years, passed away from COVID-19 on June 26, and two other teachers with whom she shared a classroom during summer school tested positive for the novel coronavirus.

Her husband, Jesse Byrd, said, “We would like our message to government and school officials to say is that now is not the time to try and send kids back to a traditional classroom,” Jesse said. “We feel the risks and dangers heavily outweigh the benefits at this time.”

“He would have to do a 180% change in terms of all these perspectives — I think to re-capture some of that trust,” Volgy said. “I must say as a political scientist though that 90 days before an election is very hard to recapture trust.”

Volgy said that Trump is currently in a very difficult position. “He can move to the center, but that’s very unlikely because he fears losing his base. The more he concentrates on his base, the more he loses suburban voters, the more he loses independent voters,” Volgy said.

Voters must register at least 29 days before the election, online, by mail or in person. Proof of citizenship is required for state and local elections.

Time will tell what happens, but if Trump loses the state and the 11 Electoral College votes that go with it, it could significantly narrow Trump’s prospects of being back in the White House for a second term.

“Things could change, but if the election were held today this state would go blue,” Volgy said.