LOS ANGELES - While most pet-owners have spent the pandemic sheltering with their favorite dog or cat, Arnold Schwarzenegger joined FOX 11’s Elex Michaelson to discuss the eclectic mix of animals he’s been joined with during quarantine - namely a miniature horse named Whiskey, and a donkey called Lulu.

Schwarzenegger says, "It’s so wonderful when you have animals around you, and they play with you, and they do funny things, and they roam around the house." 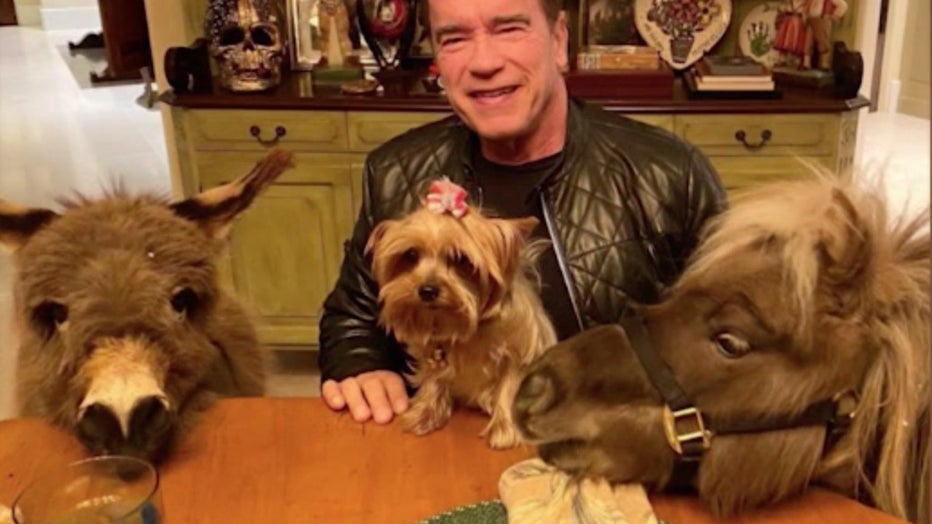 Whiskey and Lulu are joined by dogs Noodle, Cherry, and newcomer Dutch.

RELATED: The Issue Is: An exclusive with Arnold Schwarzenegger

That time at home has allowed Schwarzenegger to film a series of videos with Lulu, Whiskey, and crew, as they explore, eat snacks, play chess, and even work out.

The videos have garnered millions of views online, creating viral stars of Lulu and Whiskey, their faces now immortalized on shirts that Schwarzenegger is selling to benefit his After-School All-Stars non-profit.

"It’s so much fun to watch this, and see this energy. I think, in a way, it’s also therapeutic," Schwarzenegger said of his pets, adding that given the hardships plaguing people across the globe, he’s happy his animal videos can help spread a little cheer.

In a wide-ranging interview on The Issue Is, Schwarzenegger also discussed race relations in America, California’s ongoing response to the COVID-19 pandemic, his recent 73rd birthday, and the impending arrival of his first grandchild.

RELATED: Amid racial unrest, Arnold Schwarzenegger calls for equal opportunity for all Americans

The Issue Is is California's only statewide political show. Watch FOX 11 Los Angeles Fridays at 10:30PM and Sundays at 9:30AM. For more showtimes and information, go to TheIssueIsShow.com.