The NYPD announced Wednesday that it had arrested two suspects in connection with separate incidents involving dousing cops with water in Brooklyn and Harlem.

NEW YORK - The NYPD announced Wednesday that it had arrested two suspects in connection with separate incidents involving dousing cops with water in Brooklyn and Harlem.

Videos of both incidents went viral.

Courtney Thompson, 28, was arrested in the Brooklyn incident on disorderly conduct, harassment and other charges. Police call him a "known gang member."

Thompson was one of the people seen in cellphone video dousing two police officers on a Brooklyn street during the recent heat wave, police said.

A second arrest was made in the Harlem incident. Video showed two officers getting drenched while they were making an arrest. One of the officers was hit in the head with a bucket.

The officer who was hit in the head suffered pain and swelling, the NYPD said.

Photos of all the suspects were released Tuesday.

Police are still seeking more suspects in both cases.

"These are the individuals who are WANTED for assaulting our officers in #Harlem while they were making an arrest," Chief of Department Terence Monahan tweeted. "Every New Yorker should be disgusted by the suspects' illegal behavior." 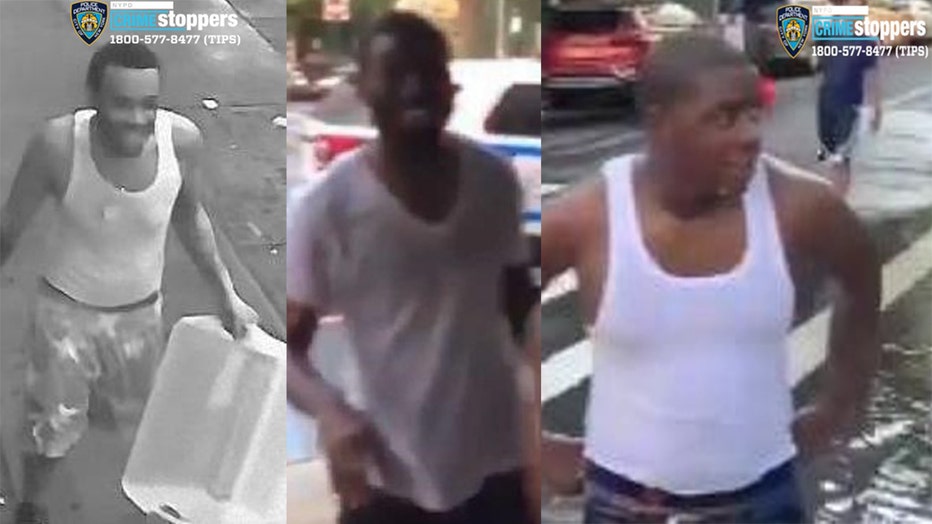 The department is asking for anyone who recognizes the men to contact the Crime Stoppers at 800-577-8477, or www.nypdcrimestoppers.com, or on Twitter @NYPDTips.

The PBA blamed the incident on City Hall and called for stronger laws.

"We are approaching the point of no return. Disorder controls the streets, and our elected leaders refuse to allow us to take them back," PBA president Patrick Lynch said in a statement released Monday. "As police officers, we need to draw a line. In situations like this, we need to take action to protect ourselves and the public."

On Tuesday, the PBA followed up with another statement.

"Since these outrageous videos surfaced, a chorus of lawmakers has condemned the behavior as 'unacceptable' and 'disrespectful,'" Lynch said in a statement on Tuesday. "We have been down this road before—words of support are meaningless if they're not backed up by concrete action to address the lawlessness on our streets."