As new officers are sworn-in, the search for Philadelphia Police Commissioner continues

PHILADELPHIA - Taking an oath to protect and serve Philadelphia, a new class of police officers hope to make a difference in the city. And, the mayor hopes to name a new Police Commissioner before the new year.

The new class of Philadelphia police officers took an oath to serve the city Monday, but the person who’ll lead the force in the years ahead remains a mystery.

“Have you given a thought to how this department will evolve and your place in it?” asked FOX 29’s Jeff Cole.

“It’s always changing and I just hope along the way I can make a difference to at least one person while I’m out here,” replied new officer Stephanie Filippone.

The 32-year-old new officer stood beaming next to her dad, a Philadelphia police officer for 25 years. 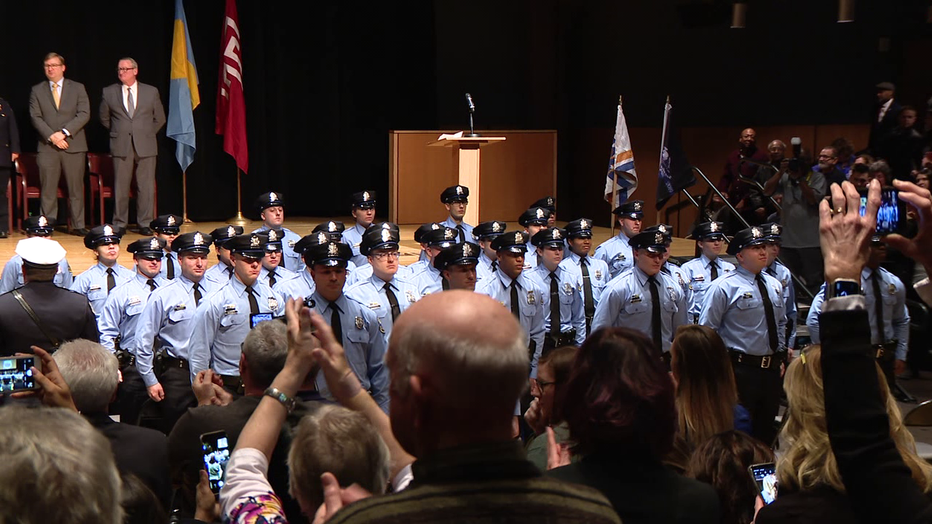 In this class of 62, 18 are women. They should learn by the end of the year the Mayor’s choice for Police Commissioner.

A top cop, he says, who must recapture trust in minority communities.

“Capture back? You think it’s been lost?” asked Cole.

“I think we have a long way to go. I think some of the things lately have been challenging,” replied Mayor Kenney.

They include officers fired for posting racist and sexist comments on Facebook, a top commander arrested for sexual assault, claims of brutality and a popular commissioner resigning under a cloud.

The interim Chief wants the job.

“Do you want to stay in the job?” Cole asked.

“Have you asked the Mayor to keep you? Have you interviewed?” Cole went on.

“In the process,” was Coulter’s reply.

“In the process, still on going?” asked Cole.

“As far as I know,” replied Coulter.

Among some members of the top brass, Coulter is seen as a strong contender to lead the 65-member force.

The Mayor says he’s searching in and outside the city.

“Will you name a person of color?” Cole asked.

“We have confidentiality agreements with people we’ve interviewed. Some have jobs outside the city,” was Mayor Kenney’s answer.

“It needs to be one that not only lives for the city, but can communicate with our communities which have lost trust,” stated Philadelphia Sheriff-Elect Rochelle Bilal.