President Biden took part in his first in-person North Atlantic Treaty Organization (NATO) summit on Monday. The president traveled to Brussels for the NATO meeting after he wrapped up a three-day meeting with the Group of Seven nations on Sunday

BRUSSELS - President Joe Biden arrived at the 2021 North Atlantic Treaty Organization summit on Monday looking to renew U.S. allies abroad for better coordination against China and Russia, while underscoring the country’s commitment to the alliance that was frequently maligned during the presidency of Donald Trump.

Early Monday, Biden sat down with NATO Secretary-General Jens Stoltenberg at the alliance’s headquarters in Brussels and highlighted the U.S. commitment to Article 5 of the alliance charter, which spells out that an attack on one member is an attack on all and is to be met with a collective response.

"Article 5 we take as a sacred obligation," Biden said. "I want NATO to know America is there."

Biden was pressed on how Trump’s baseless electoral challenges and the assault on the Capitol by his supporters were received overseas.

Biden says of American allies, "They, like I do, believe the American people are not going to sustain that type of behavior."

He was sharply critical of Trump, blasting his "phony populism" and saying it was "disappointing" more Republicans haven’t permanently distanced themselves from him.

Biden said U.S. partners recognize that "The Trump wing of the party is the bulk of the (Republican) party, but it makes up a significant minority of the American people."

The U.S. leader added, "I think this is passing — I don’t mean easily passing — that’s why it’s so important for me to succeed in my agenda."

Biden is focused this week on building a more cohesive bond between America and allies who had become wary of U.S. leadership after enduring four years of Trump's frequent insults about the relevance of multilateral alliances like NATO.

Trump previously complained about the NATO alliance made between 30 European and North American countries, saying it allows "global freeloading" countries to spend less on military defense at the expense of the U.S. and dismissed the alliance as "obsolete."

"We are meeting at the pivotal time for our alliance, the time of growing geopolitical competition, regional instability, terrorism, cyber-attacks and climate change," Stoltenberg said at the start of a joint session of the NATO leaders. "No nation and no continent can deal with these challenges alone. But Europe and North America are not alone." 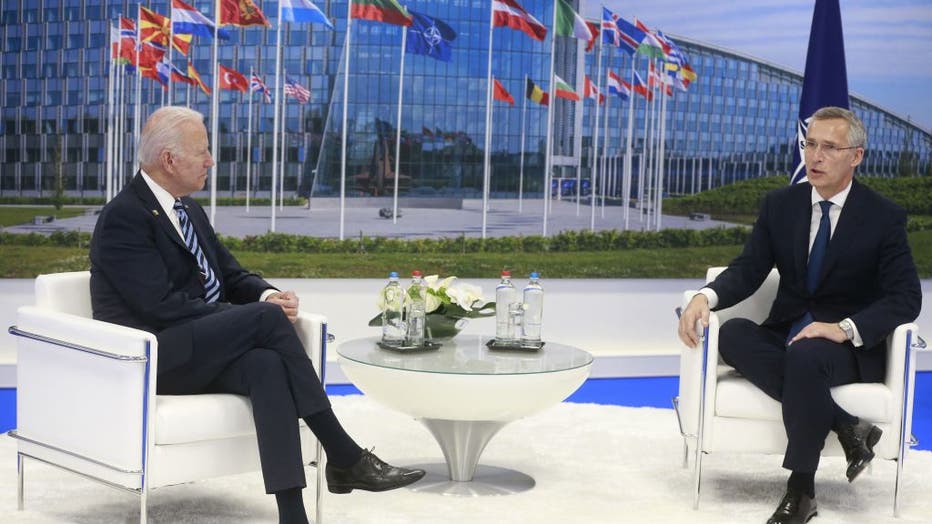 NATO leaders also declared China a constant security challenge and said the Chinese are working to undermine global order, a message in sync with President Joe Biden’s efforts to get allies to speak out with a more unified voice against China’s trade, military and human rights practices.

In a summit statement, the leaders said that China’s goals and "assertive behavior present systemic challenges to the rules-based international order and to areas relevant to alliance security."

While the 30 heads of state and government avoided calling China a rival, they expressed concern about what they said were its "coercive policies," the opaque ways it is modernizing its armed forces and its use of disinformation.

Biden, who arrived at the summit after three days of consulting with Group of Seven allies in England, pushed for the G-7 communique there that called out what it said were forced labor practices and other human rights violations impacting Uyghur Muslims and other ethnic minorities in the western Xinjiang province. The president said he was satisfied with the communique, although differences remain among the allies about how forcefully to criticize Beijing.

Biden has also used his eight-day trip to Europe to urge allies to work more closely in pressing Russian President Vladimir Putin over his government's treatment of political dissidents and to do more to stem cyber attacks originating from Russia that have targeted private companies and governments around the globe.

The North Atlantic Treaty Organization is an alliance of European and North American countries formed after World War II as a bulwark against Russian aggression.

The new Brussels communique states plainly that the NATO nations "will engage China with a view to defending the security interests of the alliance."

US President Joe Biden is officially welcomed during the start of the NATO Summit in Brussels, Belgium by Prime Minister Alexander De Croo.

But as Biden faced with the G-7 communique, some allies bristled at the NATO effort to speak out on China.

German Chancellor Angela Merkel said NATO’s decision to name China as a threat "shouldn’t be overstated" because Beijing, like Russia, is also a partner in some areas. China is Germany's top trading partner and is heavily dependent on Russia in fulfilling the country's energy needs.

But she added that it was important to "find the right balance" as China is also a partner on many issues.

"I think it’s very important, just like we do in Russia, to always make the offer of political discussions, political discourse, in order to come up with solutions," Merkel said. "But where there are threats, and I said they’re in the hybrid field too, then as NATO you have to be prepared."

RELATED: Armenian genocide: What happened, and why Biden’s recognition matters

France's President Emmanuel Macron urged the alliance not to let China distract it from what he saw as more pressing issues facing NATO, including the fight against terrorism and security issues related to Russia.

"I think it is very important not to scatter our efforts and not to have biases in our relation to China," Macron said.

The Chinese Embassy to the United Kingdom on Monday issued a statement saying the G-7 communique "deliberately slandered China and arbitrarily interfered in China’s internal affairs," and exposed the "sinister intentions of a few countries, such as the United States." There was no immediate reaction from the Chinese government to the new NATO statement.

Biden arrived at his first NATO summit as president as leading members declared it a pivotal moment for an alliance beleaguered during the presidency of Donald Trump, who questioned the relevance of the multilateral organization.

Shortly after arriving at the alliance's headquarters for the first NATO summit of his presidency, Biden sat down with NATO Secretary General Jens Stoltenberg and underscored the U.S. commitment to Article 5 of the alliance charter, which spells out that an attack on one member is an attack on all and is to be met with a collective response.

"Article 5 we take as a sacred obligation," Biden said. "I want NATO to know America is there."

It was a sharp shift in tone from the past four years, when Trump called the alliance "obsolete" and complained that it allowed for "global freeloading" countries to spend less on military defense at the expense of the U.S.

Biden was greeted by fellow leaders with warmth and even a bit of relief.

"I think now we are ready to turn the page," de Croo said.

Trump routinely berated other NATO countries for not spending enough on defense and even threatened to pull the U.S. out of the world’s biggest security organization and even questioned the mutual defense provision of the NATO charter, a central tenet of the alliance.

The alliance also updated Article 5 to offer greater clarity on how the alliance should react to major cyber attacks — a matter of growing concern amid hacks targeting the U.S. government and businesses around the globe by Russia-based hackers.

Beyond extending the potential use of the Article 5 mutual defense clause to space, the leaders also broadened the definition of what might constitute such an attack in cyberspace, in a warning to any adversary that might use constant low-level attacks as a tactic.

The organization declared in 2014 that a cyber attack could be met by a collective response by all 30 member countries, but on Monday they said that "the impact of significant malicious cumulative cyber activities might, in certain circumstances, be considered as amounting to an armed attack."

The president started his day meeting with leaders of the Baltic states on NATO's eastern flank as well as separate meetings with leaders of Poland and Romania to discuss the threat posed by Russia and the recent air piracy in Belarus, according to the White House.

Biden's itinerary in Europe has been shaped so that he would first gather with G-7 leaders and then with NATO allies in Brussels before his much-anticipated meeting with Putin in Geneva on Wednesday.

Biden met on Monday evening with Turkey's president, Erdogan, on the summit sidelines.

Biden has known Erdogan for years but their relationship has frequently been contentious. Biden, during his campaign, drew ire from Turkish officials after he described Erdogan as an "autocrat." In April, Biden infuriated Ankara by declaring that the Ottoman-era mass killing and deportations of Armenians was "genocide" — a term that U.S. presidents have avoided using.

In a brief exchange with reporters, Biden described it as a "very good meeting." He and Erdogan met privately before being joined by other officials. They spent in total more than an hour together.