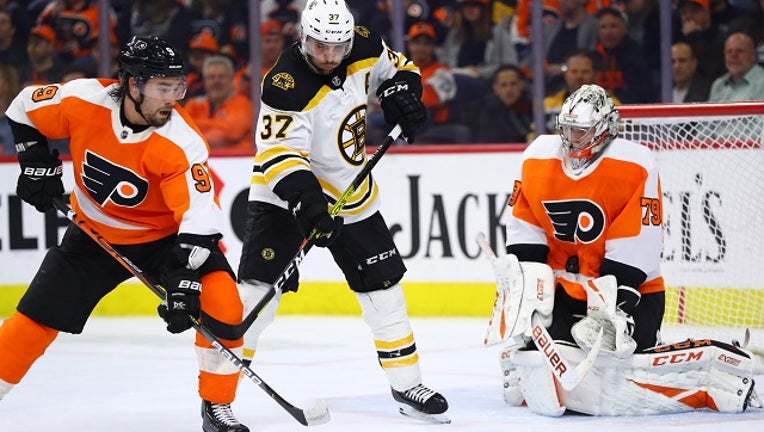 The Bruins (44-14-12) became the first team with 100 points this season and Rask picked up his 50th career shutout. Rask became the sixth active goalie with at least 50 shutouts. He has five this season.

Rusk stymied a Flyers' offense that had scored at least three goals in each of their nine wins during the streak. They scored five goals four times since the streak started Feb. 18 against Columbus.

The Flyers had been sensational as they shot up the standings and were fighting with Washington for first place in the Metropolitan Division. The Flyers had defeated the Bruins in a shootout in both games of the series this season, including a bizarre ending in January when Boston's Brad Marchand overskated the puck at center ice on a shootout attempt.

The frivolity didn't last for long, and the Flyers pounded Rask, taking 24 shots over the first two periods. Rask stood tall in net, stopping 36 total shots, and got the cushion he needed late when Bergeron's shot from the circle appeared to get deflected by a Flyers stick and went in for a 2-0 lead.

Evan Rodrigues and defensemen Justin Schultz and Kris Letang also scored as the Penguins won for only the third time in 11 games. Matt Murray made 20 saves to help Pittsburgh reach 40 wins for the seventh straight season and 13th time since 2006-07. The only exception was the 48-game lockout-shortened season in 2012-13.

Nikita Gusev and Miles Wood scored for New Jersey, which won its previous two games. Mackenzie Blackwood stopped 28 shots but the last-place Devils dropped to 6-3-2 in their last 11.

William Nylander also scored for Toronto. Mitch Marner and John Tavares each had two assists for the Leafs.

Artturi Lehkonen and Lukas Vejdemo had goals in the third period for Montreal, which lost its third straight game.

Juuse Saros made 32 saves for the win. Carey Price stopped 32 shots for the Canadiens in his league-leading 58th game of the season.

The Bell Centre hosted a pregame ceremony memorializing Habs great Henri Richard, who passed away on Friday. The crowd gave a standing ovation to Richard's family, which was in attendance, followed by a moment of silence.

DETROIT (AP) — Justin Williams scored a tiebreaking goal 1:38 into the final period, and Sebastian Aho added two goals later in the third to give Carolina a win over Detroit.

Tyler Bertuzzi and Christoffer Ehn scored for the Red Wings, who had their modest two-game winning streak snapped.