NEW YORK - The kind of fiber bowls one might find at Chipotle or Sweetgreen have a dark secret — though marketed as “100% compostable,” these fiber bowls are actually treated with toxic “forever chemicals” which are linked to cancer and never break down in the environment, a new study from the New Food Economy found.

The New Food Economy tested fiber bowls which were gathered from 14 locations of eight different New York City restaurants. Chipotle and Sweetgreen bowls were among them. They were sent off to the lab of Graham Peaslee, a chemist at Notre Dame, who carried out the testing.

To measure the total amount of flourine in the products, Peaslee’s lab used Particle-Induced Gamma-ray Emission (PIGE), which is a form of ion beam analysis. Trace amounts of flourine occur naturally in the environment, but the presence of high levels of flourine on a product indicate that it has been treated using PFAS compounds, or per- and polyfluoroalkyl substances, a broad class of more than 4,000 fluorinated compounds that do not biodegrade naturally in the environment.

High levels of flourine were found in all of the samples, and this indicates that the samples were treated with PFAS compounds, according to experts consulted for the study, including Peaslee.

Rainer Lohmann, an oceanographer and director of the University of Rhode Island’s Lohmann Lab, which monitors and analyzes how toxic, man-made chemicals interact with our waterways, said that Peaslee’s method is “a great screening tool.”

The plant fibers in these bowls will break down and are absolutely compostable, but not the chemicals used to treat them. 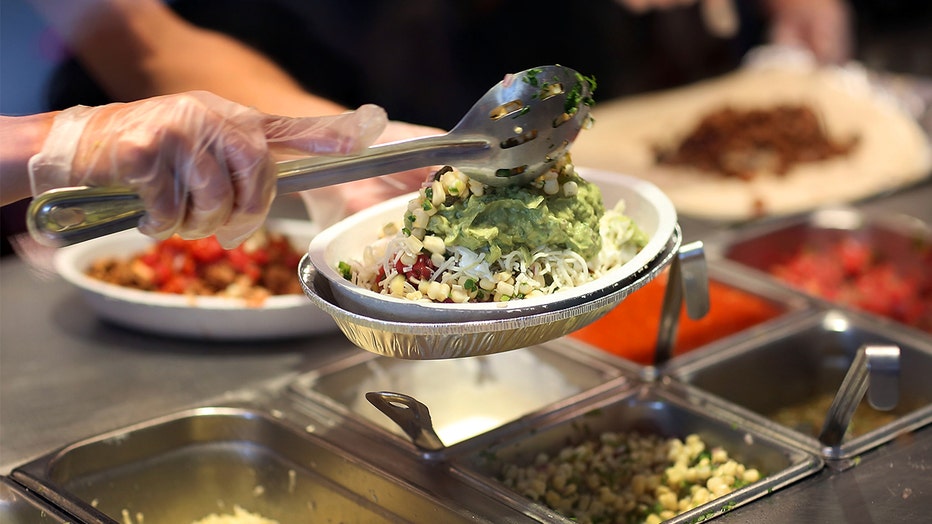 Chipotle workers fill orders for customers in Miami, Florida. Fiber bowls like those used at Chipotle were found to contain cancer-linked, non-biodegradable chemicals in a recent study from the New Food Economy. (Joe Raedle / Getty Images)

What’s more, the New Food Economy says that these fiber bowls are probably doing more harm than good when it comes to the environment.

“They are likely making compost more toxic, adding to the chemical load of the very soil and water they were supposed to help improve,” Joe Fassler of the New Food Economy argues. “And rather than degrade quickly, they contain potentially hazardous ingredients that never break down. Not in five years, and not in 500.”

PFAS are also bad for your health, according to the Environmental Protection Agency.

Over time, PFAS can accumulate in the human body and can lead to adverse health effects.Increased cholesterol levels among exposed populations was the most consistent finding in human epidemiology studies, and more limited findings have linked PFAS exposure to low infant birth weights, cancer and thyroid hormone disruption, according to the EPA.

There are nearly 5,000 varieties of PFAS, which DuPont created in 1938 and first put into use for nonstick cookware. Industries use them in countless consumer items — food packaging, carpets and couches, dental floss and outdoor gear — to repel grease, water and stains.

The chemicals also are found in firefighting foam, which the Defense Department calls irreplaceable in suppressing jet-fuel fires. Especially around military bases and PFAS facilities, decades of use have built up levels in water, soil and some treated sewage sludge used to fertilize non-organic food crops and feed for livestock.

The EPA has said it would consider setting mandatory limits after federally mandated PFAS testing of water systems found contamination. The agency has called dealing with PFAS a “potential public relations nightmare” and a “national priority.”

“I know there are people who would like us to move faster” on PFAS, EPA Administrator Andrew Wheeler said at the National Press Club in June. “We are addressing this much faster than the agency has ever done for a chemical like this.”

Impatient for federal action, several states have moved to regulate the chemicals on their own, including setting standards for groundwater or drinking water.

Retailers can help limit human and environmental exposure of PFAS compounds by eliminating the use of PFAS in their supply chain, and every little bit of mitigation counts.