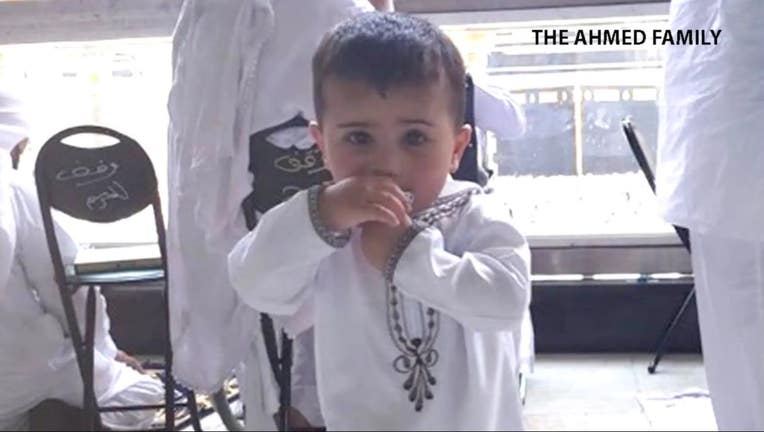 The 3-year-old boy from New Jersey who was mauled to death by a neighbor’s pit bulls has been identified.

Relatives and friends identified the victim as Aziz Ahmed, according to reports.

Ahmed, his two older siblings and his mother were in the backyard of the family’s home in Carteret when the neighbor’s two pit bulls supposedly dug under a fence and crossed into the yard.

The mother was able to hurry the two older boys inside, but Aziz reportedly didn't understand what was going on. The only thing his mother could do was throw herself over him as protection, according to News 4 New York.

Ahmed was mauled to death and his mother was hospitalized in critical condition. Police said the dogs were euthanized after officers shot them.

Relatives say the family had previously talked to the dogs’ owner about concerns over the animals’ behavior, CBS New York reported.

"The mother went to the neighbor two times to let her know the dog is wild. It’s out of hand. And you know, the owner laughed it off," one person said. Another neighbor told WABC that they had contacted police "multiple times" about the dogs.

"It cost an innocent child his life," another relative said.

A neighbor said he heard shouts for help during the attack but that he was "too late" to do more. The oldest Ahmed child, who is 10, called 911.

Aziz was taken to hospital but could not be saved, authorities said. The family held a funeral for him Thursday while his mother remained in the hospital -- possibly never able to "fully recover" from the injuries, according to reports.

Coney Island Auto Parts, who employs Aziz’s father Tanveer, started a GoFundMe for the family, which had raised more than $80,000 as of Friday morning.

"I never had the honor of meeting little Aziz but I do know his father Tanveer who is a hardworking man and just recently moved his family from Brooklyn NY to New Jersey for a better life," a message on the page reads. "Tanveer is loved by his co-workers and truly an asset to the company. We [are] calling upon the kindness of family, friends and strangers to help the Ahmed family in this difficult time."

Neither of the dogs was registered, and it is unclear if the owner will face criminal charges for the attack.