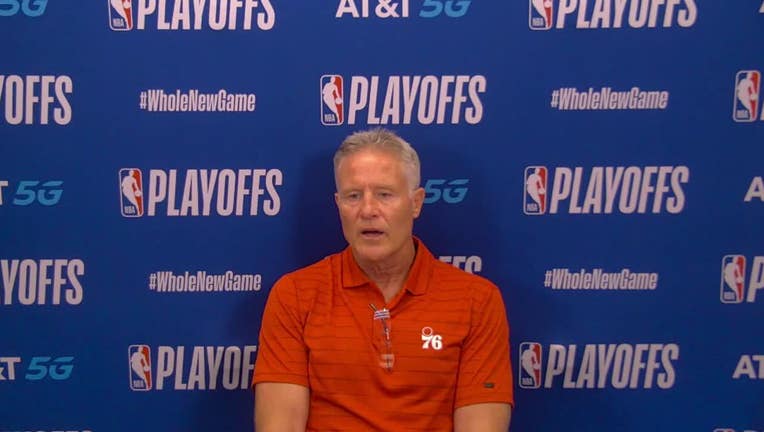 PHILADELPHIA - A year ago against Toronto, four bounces of the basketball finished the 76ers. This season, four straight playoff losses ended Philly’s season and sent the Sixers to the brink of a serious shakeup.

Brett Brown has but a slim chance of a return after seven seasons on the bench where he endured a 10-win season and losing streaks of 28 and 26 games. But, of most recent importance, Brown failed to mold the team out of the growing pains of the “Process” into championship contenders, with a mismatched roster that included All-Stars Joel Embiid and Ben Simmons.

The Sixers were swept out of the postseason by Boston with Simmons sidelined with a knee injury and Embiid tasked with carrying the franchise toward an unlikely title.

Much like every season since 1983, it was never going to happen.

Brown will likely pay the price. He seemed resigned to his fate after Game 4 and said Philly never got him at his best, mostly from the ugly mix of years of rebuilding, injury-prone players and a roster that was out of sorts. Al Horford is near the top of recent Philadelphia sports free-agent busts after he lost his starting job in the first year of four-year contract with $97 million guaranteed. Tobias Harris and Josh Richardson rarely played to their big-money potential.

“He’s a good guy,” Richardson said. “He’s a good man. He means well. I just think going forward, we’ve just got to have some more accountability. I don’t think there was much accountability this season and I think that was part of our problem.”

After the early years of Brown’s tenure was spent cleaning out salary cap space and gobbling draft picks, the 76ers are stuck with a bloated roster and not much room for general manager Elton Brand to maneuver into a big move.

The sting of last season’s elimination, when Kawhi Leonard sank the first Game 7-ending buzzer-beater in NBA history to lead Toronto past the 76ers, seems almost enviable compared to the way the Sixers limped toward Sunday’s exit.

Brown is about out of chances to fix the Sixers.

“Great guy. He’s an even better person than a coach,” Embiid said. “He cares about his players. No matter what happens, I don’t make the decisions. I trust management. He’s gonna be a great friend no matter what.”

The 76ers have $28.8 million to Simmons and $29.5 million to Embiid (30 points, 12 boards vs. Boston) committed for next season. Ok, while both have serious flaws, they are All-Stars and the franchise cornerstones -- though Brand would be wise to dangle their names as trade bait. But it’s the $27.5 million to Horford and a whopping $34.4 million to Harris that have the Sixers in a hole. Horford and Embiid never meshed to the point where Horford was benched at times in the regular season and playoffs and became a scapegoat for Philly’s woes.

Horford went 12-for-25 from the floor vs. the Celtics and missed all four 3-pointers.

“The job of an NBA coach is to take the team that you have and try to maximize it and get the most out of it. I did not do that,” Brown said. “I came in and we talked about smash mouth, bully ball, that we’re built for the playoffs and we’re big. Really all of those kinds of phrases equal ‘man we have a huge team, we have a big team.’ The thing I found most challenging as the season played out was that space became an enormous issue. Effectively you had a mismatch every time you went down the court.”

Simmons continued to frustrate, playing at times as one of the best defenders and rim attackers in the game. Other times, he refused to shoot and his missing perimeter game in a 3-point happy NBA has hurt the Sixers. Simmons made his first two NBA 3-pointers, and Brown at one point suggested Simmons attempt one every game. He attempted only seven before his season ended with surgery on his left knee.

Richardson said the next coach needs to work on holding the best players accountable. Simmons and Embiid were often deemed untouchable with Brown or a management loathe to criticize and offend their star plays.”

“There’s always gotta be a Day 1,” said Richardson, acquired in the Jimmy Butler deal. “We’ve just gotta start from scratch. It’s not gonna be easy and we’re not gonna be comfortable, but that’s what championship teams do. Guys not doing their job on or off the court, there’s gotta be some kind of consequence, not consequence, but we’ve gotta be able to talk to each other and listen.”