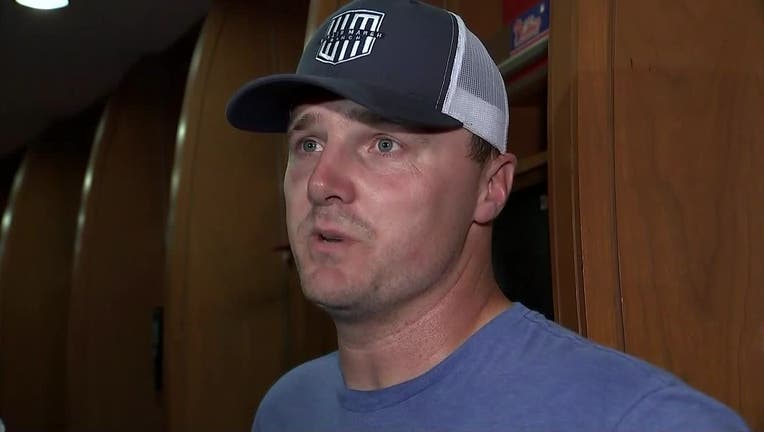 The veteran slugger ripped an RBI double in the bottom of the 10th inning against his former team, and the Philadelphia Phillies rallied to beat the reeling New York Mets 5-4 Wednesday night.

"I want to be the guy up at the plate with a chance to end it," Bruce said following his 12th career walk-off hit.

Mets lefty Jason Vargas tied a career high with 10 strikeouts in his first start since being fined for an expletive-filled confrontation with a reporter. But he was pulled after only 77 pitches and the Phillies overcame a 4-0 deficit against New York's leaky bullpen.

Rhys Hoskins drew a walk from Stephen Nogosek (0-1), and J.T. Realmuto singled. Roman Quinn ran for Hoskins and Bruce, traded by the Mets twice in the last two years, sent a long drive over center fielder Juan Lagares' head to give Philadelphia its third straight win over New York after a seven-game losing streak.

Vargas baffled hitters with his assortment of off-speed pitches, allowing two runs and three hits in 6 1/3 innings. But he exited after Realmuto doubled to start the seventh and Bruce flied out to deep center. Cesar Hernandez greeted Seth Lugo with a ground-rule double into Philadelphia's bullpen, cutting the deficit to 4-2. Pinch-hitter Brad Miller walked with two outs and Scott Kingery reached on a wild pitch after striking out swinging.

Jean Segura then hit a tying, two-run single to right-center.

"The last three out of four batters squared it up, so let's get our best reliever in there," Mets manager Mickey Callaway said, explaining his decision to remove Vargas.

The Phillies were happy to see him depart.

"We weren't able to solve that puzzle and we did a better job when the relievers came in the game," manager Gabe Kapler said.

Edgar Garcia (2-0) tossed a perfect 10th for the win and the rookie pitcher ended up dumping a water cooler on Bruce's head to celebrate the victory.

Dominic Smith and Jeff McNeil each hit a solo homer for the Mets, who have lost four in a row.

Vargas had to be restrained from going after a Newsday beat writer in the team's clubhouse following a loss at Wrigley Field on Sunday. He called it "an unfortunate distraction" on Monday and answered questions for the first time since the altercation following the loss to Philadelphia.

"I don't think all the information is really out there," Vargas said. "I don't think this is a time to get into that. But I think that anybody that knows me, anybody that has played with me, there's never been a situation like that. So to think it happened out of the blue, it's foolish."

Vargas declined to explain what he meant.

"It's over," he said. "Our organization made a statement. We put an end to it. But I think it's pretty obvious all the info isn't out there."

Segura hit a solo homer off Vargas in the sixth after he retired 11 straight batters.

Philadelphia's Nick Pivetta gave up four runs and nine hits in 5 2/3 innings. He has a 4.30 ERA in six starts since a brief demotion to Triple-A.

Smith gave the Mets a 1-0 lead in the fourth on his seventh homer and third in three games. He drove a 1-1 pitch the opposite way into the left field seats. McNeil led off the fifth with an opposite-field shot to left-center to make it 2-0.

The Mets chased Pivetta with two runs in the sixth. Tomas Nido lined an RBI single and McNeil drove in a run with a double.

The Mets selected right-hander Chris Mazza's contract from Triple-A Syracuse. He was 3-5 with a 3.59 ERA over 12 starts in the minors. RHP Walker Lockett was optioned to Syracuse and left-hander LHP Ryan O'Rourke was designated for assignment.

Mets: RHP Noah Syndergaard is expected to return from the injured list and start Sunday night against Atlanta after striking out nine in a rehab start for Class A Brooklyn on Tuesday. He has been out with a strained right hamstring.

Phillies: RHP Tommy Hunter could join the bullpen in Miami this weekend after one more rehab appearance. He has been sidelined all season with an elbow injury.