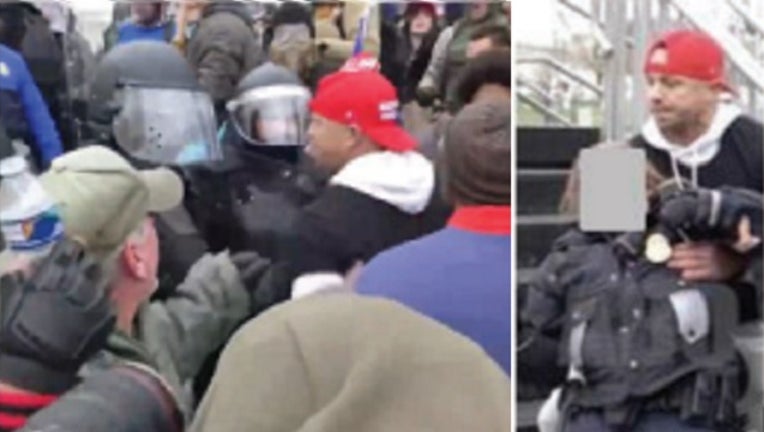 Federal authorities compiled videos from the scene outside the U.S. Capitol on Jan. 6 and charged a Bucks County man with assaulting a police officer.

PHILADELPHIA - A Bucks County, Pennsylvania, man has been charged with assaulting a federal officer after federal investigators say he pushed over a fence and knocked an officer to the ground during the violent siege at the U.S. Capitol in early January.

Charges including assaulting an officer, obstructing an officer during their official duties and obstructing an official proceeding were filed against Ryan Samsel late last week, according to federal court documents that were unsealed early Monday. No attorney information was listed for Samsel and a number listed in his name had been disconnected.

Several phone calls to Bucks County officials were not returned immediately Monday, and it was unclear if Samsel, 37, had been arrested or was in custody in Pennsylvania. In the majority of the cases for more than 160 people charged with federal crimes related to the siege, court records have remained sealed until the suspect has been arrested.

According to the criminal complaint, Samsel can be seen in videos from the Capitol approaching a reinforced fence being secured by Capitol police officers. He takes off his jacket, turns his hat backwards and takes an aggressive posture before he and several other protesters began pushing and pulling on the barrier, authorities allege.

A female officer was knocked to the ground and struck her head when the fence fell. That officer, who was not named, told investigators that Samsel said, "We don't have to hurt you. Why are you standing in our way?" The officer was later taken to the hospital for treatment after she blacked out.

Investigators said in the charging documents that Samsel can be seen on video a short time later during an altercation with another group of officers in riot gear, trying to pry a riot shield away from one of them.

A federal agent identified Samsel using a law enforcement database. A review of Samsel’s cellphone data showed he traveled to Washington on Jan. 6, according to the court documents.

Investigators said Samsel is on parole for a 2016 assault conviction in Bucks County and has an open warrant in New Jersey for a separate alleged assault in 2019.