Jyothi Marbin and her 11-year-old daughter were listening to the radio this summer when they heard a story about the number of migrant children being detained in U.S. custody.

ALAMEDA, Calif. (KTVU) -  Jyothi Marbin and her 11-year-old daughter were listening to the radio this summer when they heard a story about the number of migrant children being detained in U.S. custody.

“How many children did they say, mom?” Kaia Marbin asked. 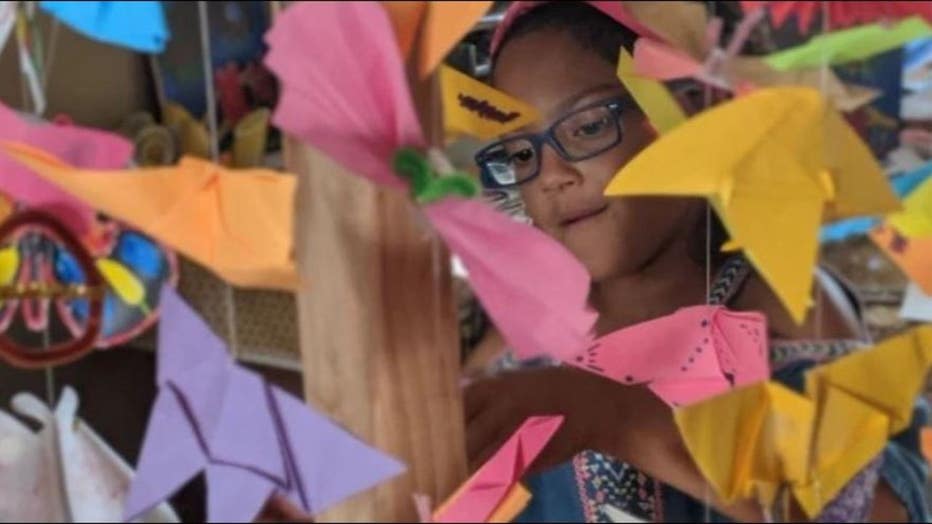 Lily Ellis, 10, stands with homemade butterflies to represent migrant children in U.S. detention facilities. Her goal, along with friend, Kaia Marbin, 11, is to create 15,000. (The Butterfly Effect)

And that’s how the idea for The Butterfly Effect project was born: To create 15,000 butterflies and display them as works of public art in the Bay Area and perhaps beyond.

"She was just really struck by that number," said her mom, Jyothi Marbin, a pediatrician at San Francisco General Hospital.

The goal is to raise awareness about the number of migrant children being detained in federal custody as they try to immigrate to the United States, and to hopefully get the adults to reform immigration policies, her mom said.

On Friday, Kaia, a 6th grader at Wood Middle School in Alameda, and her friend, Lily Ellis, 10, a student at Berkeley Arts Magnet School, co-hosted a make-a-butterfly event at ZooLabs in Oakland.

“We are envisioning a day when the kids are free and reunited with their families,” Kaia said.

Lily added: “The kids in the camps have no voice, the least we can do is raise ours.”

Shortly after the radio report in July, Kaia began to mobilize. She called Lily. What could they do? They brainstormed how to best show the number.

The girls soon collaborated with CultureStrike in Oakland, a social justice art community, and came up with the idea of visualizing the number of children in butterflies: A butterfly symbolizes migration and butterflies are free. They then began partnering with Alphabet Rockers in Emeryville, a “music makes change” nonprofit where Lily attends.  The musicians started helping get the word out about the girls’ project and they've produced what is now the girls' theme song, "Until You're Free."  Destiny Arts Center also joined in. The Oakland center has offered to be one of several collection centers for the butterflies.

Within the past month, the girls and their friends, along with Kaia’s 9-year-old brother, Jahan, who is the webmaster, have created 1,500 butterflies. They hope to reach their goal by Oct. 1.

Their artistic vision? Create a butterfly out of any kind of recycled material (don’t use anything new!)  and hang them from strings on old bike wheels with 500 butterflies per wheel.

Along the way, other groups have started hearing about the kids’ efforts and have offered to help and participate.

Jyothi Marbin said both the Oakland and San Francisco public libraries have offered to host the public art displays, as has the Children’s Creativity Museum, 826 Valencia Street and the Mission Economic Development Agency, all in San Francisco.

One idea is to bring some of the butterfly wheels down to the border wall in New Mexico, much like the see-saws that were placed there by two Bay Area professors.

“It’s just been so great,” Jyothi Marbin said. “The kids are involved. The community is involved. We’re doing something that is so simple and worthwhile.”