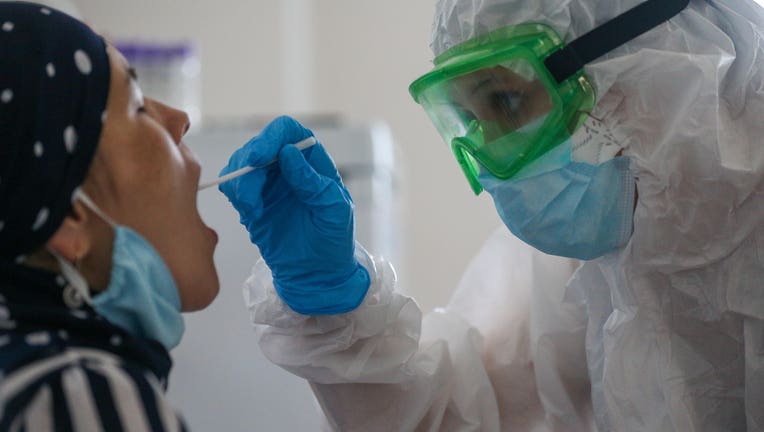 A file image shows a medical staff member taking a saliva swab from a patient for coronavirus testing during the COVID-19 pandemic. Yegor Aleyev/TASS (Photo by Yegor AleyevTASS via Getty Images)

SACRAMENTO, Calif. - California’s typical turnaround time for coronavirus tests has dropped to less than two days, state health officials said Thursday, a mark that allows for effective isolation and quarantine of those who are infected to limit the spread.

Test results now are available from laboratories within 1.3 days on average, down from the five- to seven business days that officials commonly reported last month.

Two-thirds of test results are now returned within one day and 88% within two days, Pan said. The one-day average improved 13% since last week, and is down from a statewide average turnaround of nearly four days at the beginning of August.

The improvement comes as the state plans to significantly ramp up testing starting this fall. The goal is to more than double the average of nearly 104,000 tests a day now to 250,000 by March under a $1.4 billion contract announced last month with a Massachusetts company.

The substantial improvements in capacity and turnaround will allow the state to soon begin what is commonly called surveillance testing, Pan said. The goal is to refine testing so that it’s targeting the right people and allowing health officials to better predict the track of the disease.

She said state officials will soon issue new guidelines for that testing.

California’s infection rate has dropped steadily for weeks and now sits at 3.5% for the last seven days. Hospitalizations and intensive care admissions have also been dropping, with the 1,040 people in ICUs a low not seen since near the start of the pandemic.

There were 137 deaths reported Wednesday, and California is on the verge of 14,000 since the start of the outbreak, the third-most in the country. But fewer intensive care cases should lower the death rate in coming weeks.

The state’s new four-tier system for allowing counties to reopen businesses and expand activities is based on lowering infection and case rates. Counties are penalized if they don’t test enough people.

That’s what is happening to Riverside County and officials there urged more of the 2.2 million residents to get tested. The county can test 4,000 people per day but only half the available slots are being filled. That is causing the state to adjust its case rate to a higher level that it makes it harder to move to a lower tier.

“We’ve made a lot of progress in slowing the spread of the disease and we want residents to know that more testing will help us continue to disrupt the spread of the virus,” said Kim Saruwatari, the county’s public health director. “We need to pick up our testing again – for both the purpose of isolating the sick and to help us safely reopen more parts of our community.”

For most people, the coronavirus causes mild or moderate symptoms, such as fever and cough. For some, especially older adults and people with existing health problems, it can cause more severe illness, including pneumonia, and death. The vast majority of people recover.