It was an emotional moment Thursday at a rehab hospital in suburban Chicago where groundbreaking new technology helps a 15-year-old cancer survivor guide his wheelchair using just his eye.

CHICAGO - It was an emotional moment Thursday at a rehab hospital in suburban Chicago where groundbreaking new technology helps a 15-year-old cancer survivor guide his wheelchair using just his eye.

Benny Martinez, who has raised hundreds of thousands of dollars for pediatric cancer research, is among the first in Illinois to try the new technology.

It could give the teen freedom to move that he has not had in a long time.

It was a big day for 15-year-old Benny of Park Ridge, who is testing a new hi-tech wheelchair system at Marionjoy Rehabilitation Hospital in Wheaton.

Three years ago, Benny was diagnosed with a brain tumor and following aggressive surgery and chemotherapy, he can now only move his eyes and parts of his face. 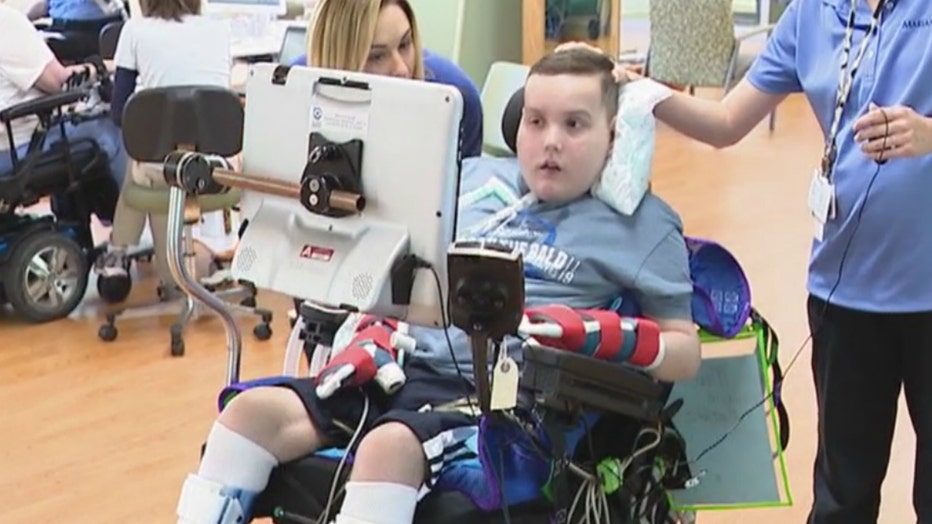 "He's inspired a lot of people. Everybody who meets him loves him,” said father Ed Martinez.

Using just his left eye, Benny looks at directional commands on a screen. The computer reads the angle of his pupil and then moves the wheelchair in that direction.

"This opens the door to allow him to independently move himself, so now he can explore his environment. He can interact as you saw with his dad. He can play. He can have fun,” said physical therapist Kathrina Prostka.

Benny has also raised nearly $300,000 for pediatric cancer through St. Baldrick’s – some of it in middle school before he was diagnosed.

"He raised close to two-thousand dollars. Shaved his head. Eleven days later we find out he has a tumor. Now we're fighting the fight,” Martinez said.

"It's definitely different from the way I usually drive in my wheelchair. But it's hard to focus on the arrow and watch where you are going. That is only my opinion of course,” Benny said through his computer.

"He's an amazing person. And he has great dreams and aspirations of what he wants to do. And hopefully this wheelchair will help him to achieve that. Because I think he has great potential,” Prostka said.