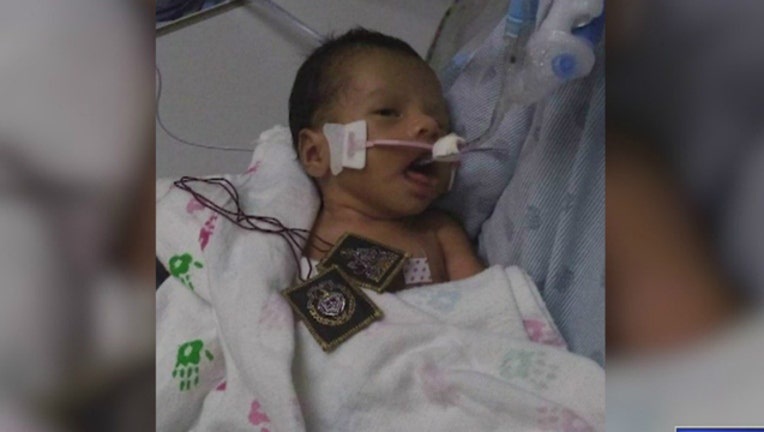 Marlen Ochoa-Lopez’s baby is shown in this photo provided by the family. Authorities said Ochoa-Lopez drove to the suspects’ home in response to an offer of free clothes posted in a Facebook group.

CHICAGO (AP) - A Chicago-area hospital says it regrets sending bills to the family of a baby boy who died about seven weeks after attackers cut him from his mother’s womb.

Advocate Christ Medical Center in Oak Lawn sent bills for Yovanny Lopez’s care that totaled about $300,000, said the family’s lawyer, Frank Avila. Some bills even referred to Yovanny as “Figueroa, boy” — the last name of Clarisa Figueroa, who is accused of orchestrating the attack on the baby’s mother so that she could claim him as her own.

“My client is getting bills for hundreds of thousands of dollars from the hospital that has the Figueroa name on it and that’s atrocious,” Avila said. “It needs to stop.”

Yovanny died June 14 at the hospital, where he had been on life support since being brought there on April 23 by Figueroa, who told staff he was hers. Prosecutors later charged Figueroa, 46, and her adult daughter with killing of the boy’s mother, 19-year-old Marlen Ochoa-Lopez, saying Figueroa lured the teen to her home with the promise of baby clothes.

The hospital issued a statement apologizing for the billing issue.

“Our hearts and prayers continue to be with the Ochoa-Lopez family during this difficult time. We have had discussions with the family regarding inadvertent billing and we regret this error. We take our obligation to patient privacy seriously, and therefore are unable to comment further regarding care, services or billing,” the hospital wrote. A spokeswoman, Johnna Kelly, declined to comment further about the issue Friday.

The hospital has faced questions over its handling of the case. Despite Figueroa showing “no signs consistent with a woman who had just delivered a baby,” according to prosecutors, a mandated hospital reporter didn’t notify the Department of Children and Family Services about the newborn or the suspicious claim until May 9, the agency said. When she first showed up at the hospital, Figueroa had blood on her arms, hands and face that authorities later determined was from Ochoa-Lopez, prosecutors said.

According to police, Ochoa-Lopez drove from her high school to Figueroa’s home in response to an offer of free clothes that Figueroa had posted on Facebook. When she arrived, police said, Figueroa and her adult daughter strangled Ochoa-Lopez and then cut the baby from her body. Figueroa dumped the teen’s body in a garbage can behind her home before calling 911 and heading to the hospital, investigators said.

Police did not connect the Ochoa-Lopez’s disappearance and the 911 call about the baby until May 7, when friends of the teen directed detectives to her social media account, which showed she had communicated with Figueroa in a Facebook group for expectant mothers.

The federal Department of Health and Human Services determined last month the hospital was in compliance with Medicare requirements for its handling of the baby’s case.

The bills to Yovanny’s family are for treatment that dates back to April 23 and include care of “high complexity.” He was listed as “Figueroa, boy” for multiple line items dating until at least May 7.

“Thank you for choosing Advocate Health Care,” said a statement dated June 3. “Your balance is past due. Please pay the entire amount ... to avoid being referred to an external collection agency.”

Avila said hospital officials promised at a meeting to waive the bills, but the family continues to receive demands for payment.

“I would hope the hospital would not be so cruel” in enlisting a bill collector, he said.