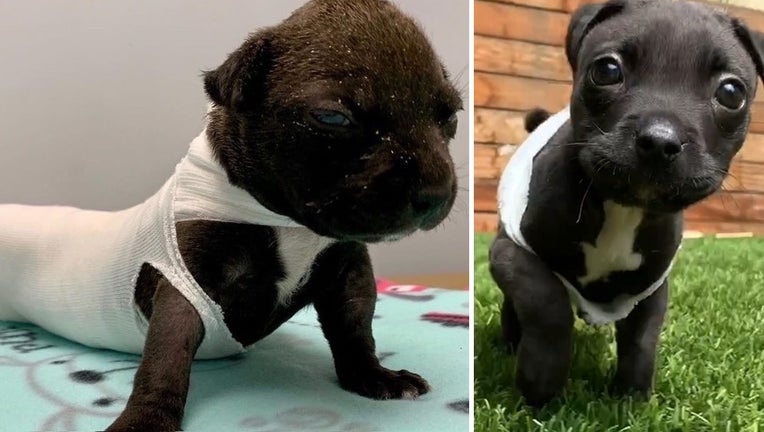 After being burned and having her legs broken from a brutal beating, then put into a plastic bag and dumped in the trash, the 3-week-old puppy fought to survive against all odds.

Weeks later, Hope is not only walking, but running and playing like any other puppy.

"Currently she is in foster care being treated for burns that have not yet healed, but is expected to make a full recovery," the foundation wrote in an update on Facebook.

Last month, the pitbull-mix was tossed into a dumpster in Coachella, California, just two blocks down the street from where seven puppies were dumped weeks prior.

"She was found in a dumpster in Coachella, discarded in a plastic Walmart bag," The Animal Hope & Wellness Foundation wrote on Facebook. "Someone rummaging through the trash heard her crying, took her to the owner of a local jewelry store, where she was rushed to emergency."

Veterinarians discovered that Hope's injuries were horrific to say the least.

"It appears as if she was burned with a caustic substance, or a metal object like an iron. She is only a few weeks old, had a portion of her tail cut off, and can not walk due to being beat and assaulted."

The foundation told Fox 35 that her back legs were crushed and she may never walk again.

"We will do everything we can to hold whoever did this accountable, but will need the public's help."

The foundation offered a $20,000 reward for information leading to the arrest of whoever is responsible. The original reward was $10,000, but actress Shannen Doherty and model Joanna Krupa both donated $5,000 each. So far, no one has been charged.

In a video update on June 3, Hope is seen taking her first steps since being brought to the foundation--steps they never thought she would take again.

While her body is still healing from the severe burns she suffered, Hope seems to have use of all four of her legs and is making friends while she recovers.

"While the scars of her past life will never leave her, it is who we are on the inside, that touches the world and those that surround us. The dog who defied all odds."

"Thank you to everyone who shared her story, supported her care, and believed that in the end she could."

Those interested in donating to Animal Hope Rescue can do so here.