SAN FRANCISCO - Two newlyweds who recently tied the knot in California have tested positive for the coronavirus, along with eight friends among their 100-person guest list.

The anonymous couple had looked forward to saying "I do" at SS. Peter and Paul Church on July 4 in San Francisco, the San Francisco Chronicle reports. Rows of pews had been taped off and nearly 100 guests were instructed to enter from a parking garage underground, allegedly to prevent tourists and onlookers from entering the Catholic church during the ceremony.

Days before, city attorney Dennis Herrera sent a cease-and-desist letter to the archdiocese, ordering officials to stop holding illegal indoor events in violation of San Francisco’s health orders amid the COVID-19 crisis, per the Chronicle.

As attendees quietly arrived, a city official “crashed” the event and called for a stop, after the city attorney’s office received a tip that a large wedding was planned at SS. Peter and Paul. The wedding party moved outdoors to a nearby playground, where the bride and groom wed.

The city official asked that “strict distancing compliance” be followed throughout the adjusted ceremony and that all attendees wear face coverings. While most guests allegedly “watched a live Zoom of the ceremony from their cars,” the Chronicle claims that footage shows more than 12 people at the outdoor gathering. The San Francisco Department of Public Health currently caps gatherings of people from multiple households at 12 attendees.

In the days that followed, the bride, groom and at least eight guests tested positive for COVID-19, two attendees told the outlet.

Ahead of the big day, about 40 people went to a rehearsal dinner at Harborview Restaurant and Bar, where they ate on a roof deck. 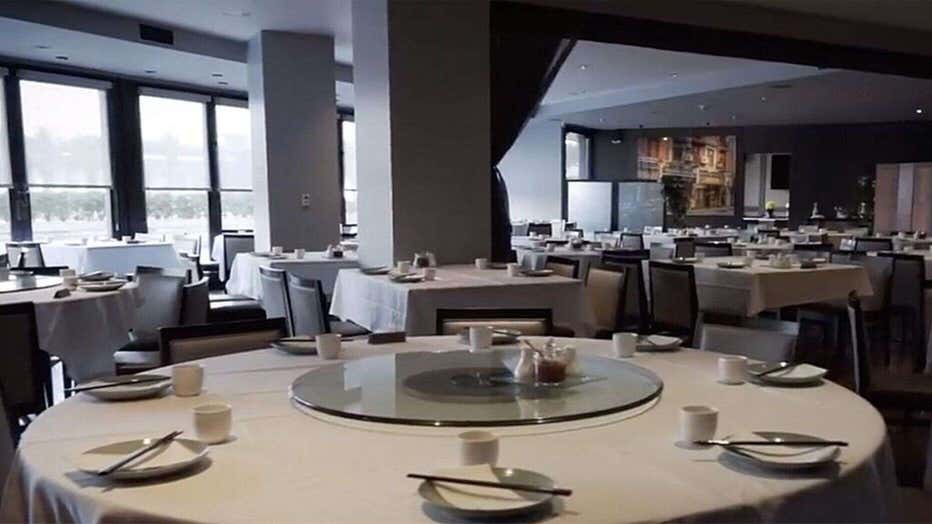 An anonymous patron has since alleged that the group did not wear masks or observe safe social distancing, though a Harborview spokesperson has disputed the claims.

“From my observations, the guests wore masks or were sitting separately at socially distanced tables,” spokesperson Karen Liu told the outlet, emphasizing that the restaurant “very seriously” heeds health and safety regulations and explaining that Harborview worked with the host to seat guests at tables with members of their family or household.

No one has since contacted the eatery about possible COVID-19 exposure from the rehearsal dinner party, Liu continued, and no employees have reported feeling ill or symptomatic for the viral disease. Moving forward, the staff will also be tested, Liu said.

According to the Chronicle, the newlyweds celebrated their reception in the backyard of an East Bay home that belongs to relatives of the groom.

After the festivities concluded, wedding guests flew back home to places like Nashville, Arizona and San Diego, potentially spreading the virus along the way.

No known cases of COVID-19 linked to the July 4 nuptials have reportedly led to hospitalizations.

“This is the perfect example of why public health officials have been trying to convince people of the problems with getting together in crowds,” Swartzberg told the Chronicle.

“And I would be shocked if we didn’t see this consequence. This should be the poster child in why people should take responsibility.”

As of Tuesday morning, the California Department of Public Health reports that there have been 460,550 cases of COVID-19 in the Golden State. The viral disease has claimed the lives of 8,445 people.

Get updates on this story from FOX NEWS.