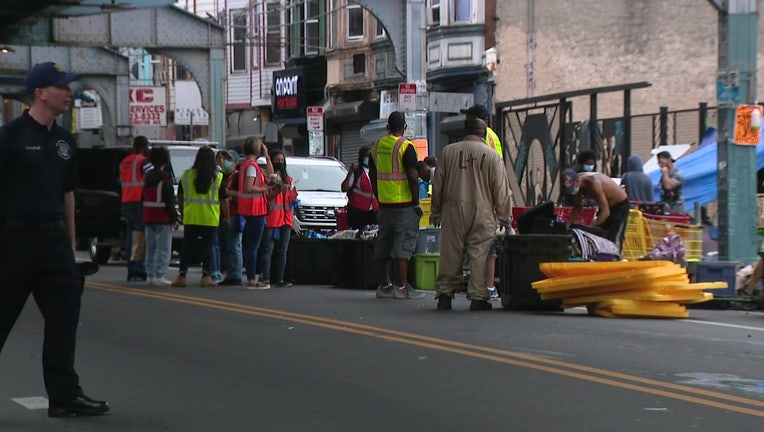 Crew on Wednesday cleared a homeless encampment on the 3200 block of Kensington Avenue.

KENSINGTON - Crews on Wednesday cleaned up a homeless encampment in Kensington a month after the city gave residents a deadline to move out.

"The City is increasingly concerned about the safety and wellbeing of people in and affected by the encampments in Kensington," the city said on Wednesday. "Encampments present sanitation and safety challenges that affect their residents and their neighbors, and are not the best-case scenario for anyone."

Philadelphia on July 16 gave encampment residents until Aug. 18 to move out after the makeshift community began to grow along the 3200 block of Kensington Avenue. The city advised residents to remove tents, structures and possessions ahead of the deadline.

Members of the Philadelphia Police Department were at the encampment on Wednesday morning, but the city stressed that clearing the community was not a "police-led action."

The city removed a homeless encampment at a PATCO station in Center City.

Philadelphia likely wants to avoid the encampment growing to the size of the community that gathered along the Benjamin Franklin Parkway last summer and lead to a standoff with police until it was peacefully disassembled.

Since then, the city has removed smaller homeless communities that have popped up around the city.