A 65-year-old man remained hospitalized on Friday morning after being brutally beaten at a bus stop in Buena Park.

BUENA PARK, Calif. - A 65-year-old man remained hospitalized on Friday morning after being brutally beaten at a bus stop in Buena Park. The vicious attack was caught on camera, and police asked for the public's help in locating the suspect.

Officers responded to a bus stop at Beach Boulevard and Orangethorpe Avenue around 8:15 a.m. Wednesday and found the victim unconscious, according to the Buena Park Police Department.

Witnesses told officers the victim and another man got into a shouting match, then the suspect pushed the victim to the ground and proceeded to kick and stomp the victim repeatedly in the head before taking the victim's bike and riding away eastbound on Orangethorpe Avenue, police said.

Video of the beating was captured by the dashcam of an Orange County Transportation Authority bus.

“This is disgusting when you really look at the videotape," said Buena Park Police Sgt. Mike Lovchik. "This was truly a one-sided fight and there was absolutely no justification for the assault." 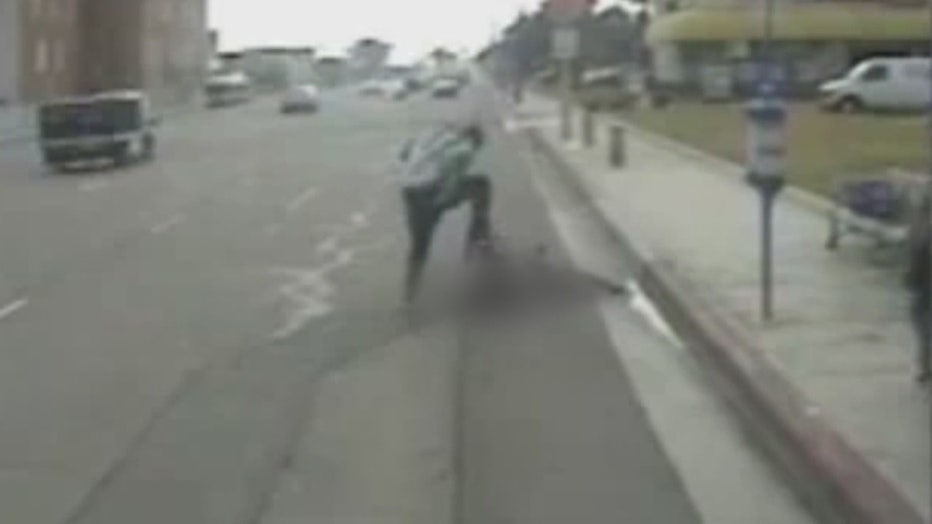 The victim was taken to a hospital in critical condition and has yet to regain consciousness, the BPPD said early Friday.

The suspect was described as white, 25 to 35 years old, about 5 feet 10 inches tall with a large build and light hair in a bun. He has some facial hair and wears glasses and was wearing a green and gray sports jacket with "Converse'' on the front and the number "8'' on the back, police said.