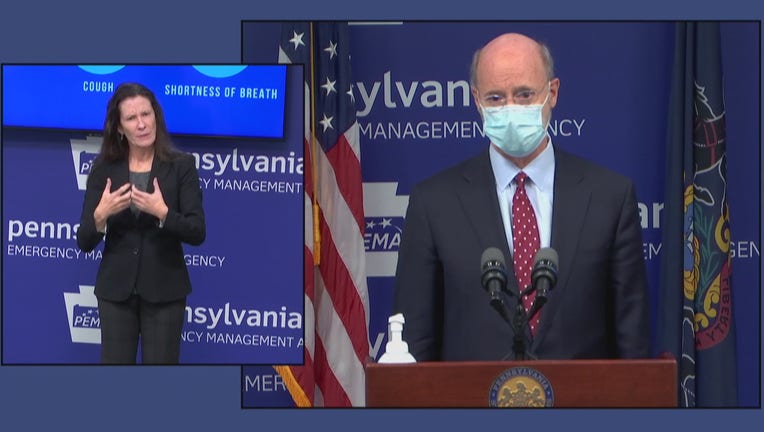 HARRISBURG, Pa. - A Democratic state lawmaker criticized Pennsylvania’s vaccine rollout as muddled on Friday — saying other states are doing a much better job at distribution and communication — while unions representing police and prison guards expressed outrage at having been shoved farther back in line for COVID-19 shots.

Although Republicans have been more than happy to attack Democratic Gov. Tom Wolf over his handling of the coronavirus pandemic, the scolding from a fellow Democrat was remarkable — and a sign of mounting frustration over the stubbornly slow pace of vaccinations in Pennsylvania and shifting guidance about who is eligible to get them.

"Pennsylvanians are confused and anxious to receive a vaccine, and they deserve clearer communication and more concrete answers," wrote Sen. Lindsey Williams of Allegheny County. "I am asking the Department of Health for a transparent, clearly communicated, and efficient vaccine distribution plan for Pennsylvanians."

She added: "Pennsylvania must catch up to other states in ease of vaccine distribution and communication."

In Pennsylvania, as elsewhere, demand for the two COVID-19 shots has overwhelmed supply, and residents have been forced to navigate a patchwork distribution system involving hospitals, pharmacy chains, municipal health departments and even grocery stores. Pennsylvania has been getting about 140,000 doses a week from the federal government and blames a lack of supply for the slow rollout.

"There is more demand for the vaccine than vaccine available and we are working as hard as we can to make sure we get our fair share from the federal government," said Wolf's spokesperson, Lyndsay Kensinger.

But other states have done a better job at getting shots into arms. Pennsylvania ranks 34th among the states in the number of doses administered per 100,000 people, according to data from the U.S. Centers for Disease Control and Prevention.

Philadelphia’s health commissioner, Dr. Tom Farley, told state lawmakers Friday that he understood the frustration among people who want the vaccine but can't get it.

"Information is confusing, you don’t know where to call, you don’t get good answers, you’re told you gotta wait, but you don’t know how long you’re going to wait, so I really share that frustration," Farley said.

Interest in the vaccine surged this week after Pennsylvania

"We did see a massive influx of additional demand," said Dr. Jaewon Ryu, president and chief executive officer of Geisinger, one of the state's largest health networks.

Geisinger has scheduled 80,000 vaccine appointments since Tuesday, and said some of those patients will have to wait until the middle of February to roll up their sleeves. Another health system, Allegheny Health Network, was booked solid and temporarily disabled its scheduling portal.

The state's decision to move one particular group of at-risk people — smokers — ahead of first responders in the vaccine line didn't sit well with labor unions representing state police troopers and the state’s corrections officers.

Both unions acknowledged that Pennsylvania's

"Our members are overworked, exhausted and are working massive amounts of overtime due to COVID-19 illnesses within their ranks," said John Eckenrode, western region vice president of the Pennsylvania State Corrections Officers Association. "The mental anguish of passing the virus to their loved ones also takes a tremendous toll. That’s why this decision to put smokers ahead of corrections officers is repugnant."

David Kennedy, president of the Pennsylvania State Troopers Association, said public safety could be stretched to the brink if too many first responders are infected.

"The commonwealth should immediately reject this tone deaf recommendation and vaccinate first responders so they can focus on doing their jobs," Kennedy said.

Williams, the state senator, called on the Health Department to enlist small, local pharmacies in the vaccination effort, and urged the state to launch a notification system — perhaps using the existing COVID Alert PA smartphone app — that would allow residents to easily register for the vaccine.

"There is a dire need for Pennsylvanians to be able ‘sign up’ to be notified of when they are eligible to receive a vaccine and where they can receive it," she said.

The Wolf administration pointed to a

UPMC pushed back Friday, saying it has vaccinated employees appropriately "to ensure the continued functioning of our vital health care services."

"Our critics are misinformed, and our communities would be better served by a focus on rapidly expanding vaccine supply," said UPMC spokesperson Paul Wood.