Former Minneapolis police Officer Derek Chauvin has been convicted of murder and manslaughter in the death of George Floyd, the explosive case that triggered worldwide protests, violence and a furious reexamination of racism and policing in the U.S.

Car horns filled the streets of downtown Minneapolis on Tuesday evening while chants of "George Floyd" rang loud into the evening air at George Floyd Square.

There was no shortage of hugging, crying and celebrating once Derek Chauvin was found guilty of murder and manslaughter.

"It means so much to me," Venisha Johnson told the Associated Press. Tears poured down her face at a gathering at George Floyd Square. "I’ve been praying for George every day, every morning at 6 a.m. I’m just so happy. The way he was murdered was terrible! But thank you, Jesus."

For many, Floyd’s name will bring back memories of a viral video that showed Chauvin kneeling on Floyd’s neck for nearly 10 minutes. It will remind them of the demonstrations that took place in solidarity across the globe last summer.

But for some, it’s a reminder of escalated racial tensions and the violent riots that took place across the United States. And those riots seemed to be fresh on the minds of many American cities ahead of the verdict. 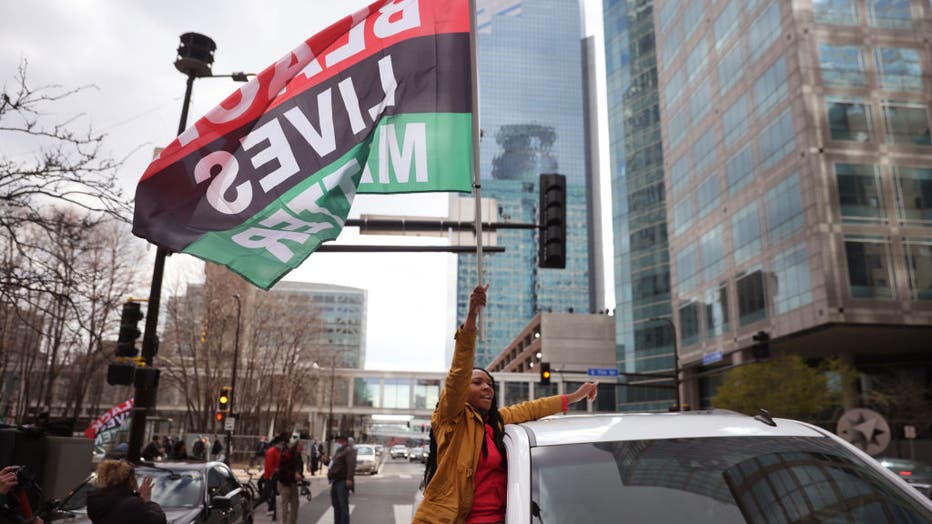 People celebrate after hearing the verdict in the Derek Chauvin trial on April 20, 2021, (Photo by Scott Olson/Getty Images)

Authorities in Grand Rapids, which had some of Michigan’s worst violence after Floyd’s death, guarded the police building with concrete barriers before the verdict was announced.

And in Portland, Oregon, which was home to one of the most enduring protests and vandalism in the months after Floyd’s death, the mayor declared a state of emergency and put state police and the National Guard on standby.

But just as the unrest spread from coast to coast last June, the verdict inspired jubilation to do the same. 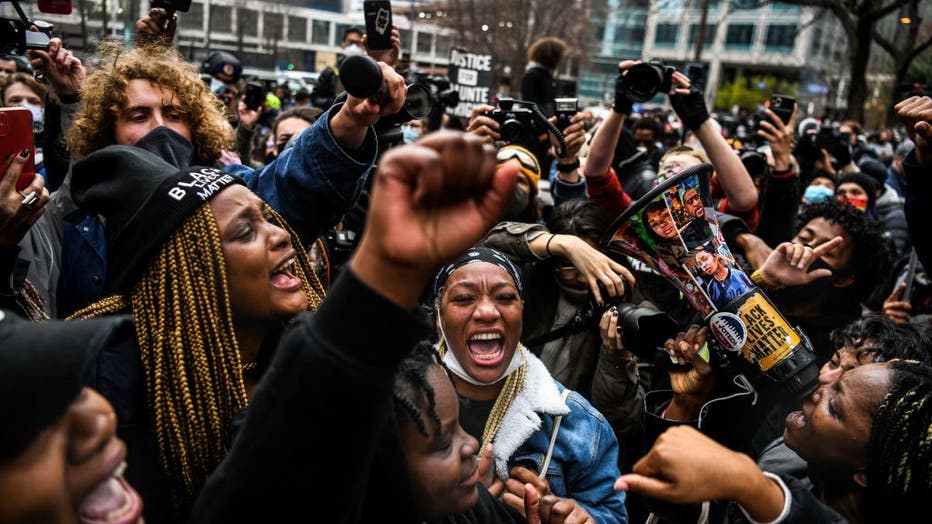 In Houston's Third Ward, the historically Black neighborhood where Floyd grew up, a crowd gathered near a mural of Floyd to listen as the verdict was read on TV. When the guilty verdict came down, people drove by honking horns and yelling, "Justice!"

In Washington DC, people gathered at Black Lives Matter Plaza to celebrate the news. It was home to many protests last year — and a clash between police and demonstrators when former President Donald Trump had the area cleared so he could pose for photos at a nearby church.

In response, Mayor Muriel Bowser painted Black Lives Matter on the road, which sparked a trend that other cities adopted.

Garrett Reaves – a D.C. man who provided refuge for protesters in his Swan Street home last year – was among those who visited Black Lives Matter Plaza Tuesday to mark the occasion.

"It’s tragic justice. We’re reflecting on reality – I can only speak for myself as a microcosm of what took place on June 1 and that stemmed from George Floyd. It’s tragic, but it’s our reality," Reaves told FOX5DC.

In Los Angeles, a group of people celebrated at the corner of Florence and Normandie Avenues — the scene of chaos in 1992 when the city dissolved into riots after four officers were acquitted in the beating of motorist Rodney King.

"The last time that we were out here during the Rodney King riots out here, we didn't get justice so right now we're having peace and justice. For me, today means justice. Justice for my Black people, and justice for George Floyd's family," said Raymond Ross, a South Los Angeles resident who spoke with FOX 11 Los Angeles.

While the verdict was welcomed news, many people are not satisfied. The verdict holds Chauvin accountable for Floyd’s death, but countless other cases of police violence against unarmed Black people do not get the same result.

Some, like the Breonna Taylor case, don’t make it to trial or involve an arrest. Taylor was shot and killed by police who opened fire inside her apartment as she slept in her bed.

Authorities declined to charge the officers in her death, but decided to charge Officer Brett Hankison with wanton endangerment, which means he’s accused of conduct that creates a substantial danger of death or serious physical injury to another person.

Officers executed a no-knock warrant in Taylor’s case, which would be outlawed in the George Floyd Justice in Policing Act (H.R.7120) — as would chokeholds like the one police used to kill Eric Garner in 2014.

The House passed H.R.7120 last year, but it has been tied up in the Senate ever since. It would address many other issues in police reform, such as the following:

Lowers the criminal intent standard — from willful to knowing or reckless — to convict a law enforcement officer for misconduct in a federal prosecution.

Limits qualified immunity as a defense to liability in a private civil action against a law enforcement officer or state correctional officer.

Authorizes the Department of Justice to issue subpoenas in investigations of police departments for a pattern or practice of discrimination.

President Joe Biden and Vice President Kamala Harris formally addressed the nation Tuesday evening, hours after the verdict was read. Both said they will continue to urge lawmakers to pass the George Floyd Justice in Policing Act.

"We are all a part of George Floyd’s legacy and our job now is to honor it and to honor him," Harris said.

Biden said if it passes in the Senate, he will sign it "as quickly as possible."