NEW YORK - When doctors in New York were preparing to find a suspected cancerous tumor in a woman's brain, they ended up discovering the egg of a tapeworm instead.

Rachel Palma, a 42-year-old from Middletown, New York, had started noticing unusual symptoms. They were more subtle at first, but eventually began to escalate.

“It started with something so small, such as I was holding my coffee cup and my right hand would just suddenly give way,” she said, adding that she didn’t want to worry anybody at first that something could be wrong.

“My mother told me, ‘You left a message on our answering machine and it made absolutely no sense.’ I’m like, ‘What are you talking about? I didn’t call you.’ And she played the message on her answering machine that said that the store where I bought my bed two years ago was coming to take the bed back. And I have absolutely no recollection of ever making that phone call.”

Palma suffered “horrific nightmares” and even some hallucinations.

“It was more terrifying for my husband I want to say. I was always calm about it,” she said.

An eventual MRI scan revealed a lesion on her brain about the size of a marble. Doctors eventually suspected it to be a malignant brain tumor. 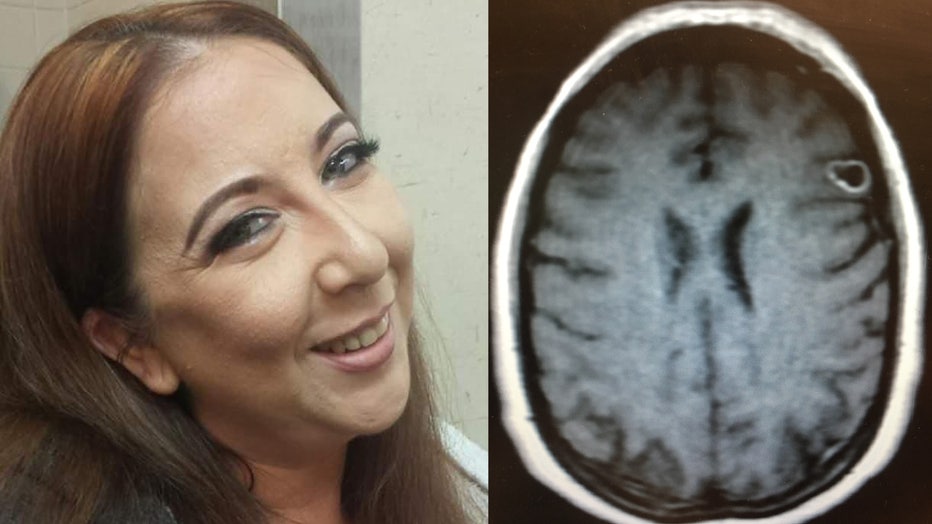 Rachel Palma, pictured, went to the doctor after experiencing some unusual symptoms and discovered she had a brain lesion. It turned out to be a tapeworm egg. (Photo credit: Rachel Palma / Mount Sinai Heath System)

“I was really very out of it,” she said. “So the fact that I might have cancer really did not sink in, even up until the surgery. It really didn’t. It’s almost like something inside of me knew that it was not cancer. There’s really no other explanation.”

Palma underwent surgery in September 2018 with a team led by Dr. Jonathan Rasouli, the chief neurosurgery resident at the Icahn School of Medicine at Mount Sinai.

Suspecting that it could be cancer, Rasouli described the initial mood in the room as “on the sad side.” But what they found instead was something else entirely.

“At first we were kind of surprised and weren’t exactly quite sure what we were looking at,” Rasouli said. “It basically looked exactly like a quail egg inside her brain.”

Palma was officially diagnosed with a parasitic infection called neurocysticercosis, which is caused by “swallowing microscopic eggs passed in the feces of a person who has an intestinal pork tapeworm,” according to the U.S. Centers for Disease Control and Prevention. It is treated with antibiotics.

Neurocysticercosis is a leading cause of adult onset epilepsy worldwide, the CDC reports. It's rare, with an estimated 1,000 new hospitalizations for the parasitic infection in the United States each year. Cases are most frequently reported in New York, California, Texas, Oregon and Illinois.

According to Rasouli, her case was unique because she didn't have any of the risk factors. She'd never left the country, she didn't live in a household with someone who had the tapeworm and she doesn't handle raw pork.

Infectious disease specialists that Rasouli later consulted with said it was very unlikely that the egg could have potentially hatched in her brain.

“Once the tapeworm larvae makes it way to the brain, it starts maturing and basically develops into an embryo,” Rasouli explained. “And the embryo forms an egg around it.”

He added that because the immune system in the brain is so strong in normal circumstances, as was the case for Palma, it keeps the egg from ever hatching.

Rasouli said the left frontal lobe in the brain, where the tapeworm egg was found, controls the right side of the body — which seemed to fit with her symptom of suddenly dropping things from her right hand. The egg was also “smack dab” in area of the brain that controls speech, so the team had to be extra careful taking out the entirety of the parasite as to not damage the area inadvertently.

Palma remembers waking up and hearing the “good news,” which was that it wasn’t a cancerous tumor.

She was visited by other medical professionals, including infectious disease doctors, who started going down a checklist to figure out how she’d contracted the tapeworm — which remains a mystery.

“I’d say within two months of having the surgery, all of my symptoms had subsided,” she said.

Palma said she developed an infection hours after one of her procedures — but has since recovered, is otherwise healthy and has returned to work, with a story to tell.