How did Tiger Woods’ crash happen? Stu Mundel from Fox 11 Los Angeles breaks it down

Tiger Wood's is in serious condition following a single-car crash in Rancho Palos Verdes, California. Fox 11's Stu Mundel goes through how this crash may have happened, leading to his SUV ending up on a steep hill. Subscribe to NewsNOW from FOX! https://bit.ly/3lMoziB​​​ Where to watch NewsNOW from FOX: https://www.newsnowfox.com/​​​ Follow us @NewsNOWFOX on Twitter: https://twitter.com/NewsNOWFOX​​​ Raw and unfiltered. Watch a non-stop stream of breaking news, live events and stories across the nation. Limited commentary. No opinion. Experience NewsNOW from FOX.

Woods, who’s known for the signature look, said in a tweet later that night that it was "touching" to see all of the tributes.

"It’s hard to explain how touching today was when I turned on the tv and saw all the red shirts," Woods wrote in a tweet. "To every golfer and every fan. You are truly helping me get through this time." 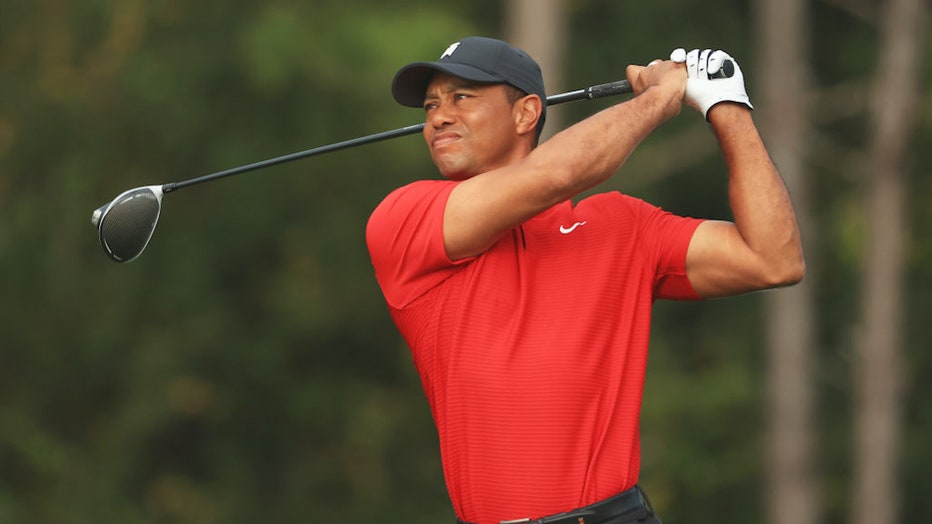 FILE - Tiger Woods of the United States plays his shot from the second tee during the final round of the PNC Championship at the Ritz-Carlton Golf Club Orlando on Dec. 20, 2020 in Orlando, Florida.

RELATED: Tiger Woods 'recovering and in good spirits' after undergoing procedures on injuries from Tuesday's crash

Players from the Gainbridge LPGA tournament, which is an all-female professional golf tournament, in Boca Rio, Florida were seen wearing the bright red shirts on Sunday.

Maintenance staff showed up and showed out in their brightest reds at the Puerto Rico Open to show their support as well.

Another golfer, Bryson DeChambeau, showed his support for his "idol" and "role model" while competing in the WGC-Workday Championship by using a ball with "Tiger" written on it.

"We’re pulling for you @tigerwoods. A mentor, idol and role model to my career, there’s no one that could come out of this stronger. We are glad you’re here. See you soon," DeChambeau wrote.

Woods was in a single-car crash on Feb. 23 when a 2021 Genesis SUV he was driving on a downhill stretch of road struck a raised median in a coastal Los Angeles suburb, crossed into oncoming lanes and flipped several times.

The wreck happened on the border between the communities of Rolling Hills Estates and Rancho Palos Verdes. The county supervisor who represents the area has requested a safety review of the roadway, where cars are known to gain speed because of the steep grade and authorities have said wrecks are common.

After undergoing surgery to his right leg, Woods was moved Thursday to another Los Angeles hospital where he will continue his orthopedic care.

"On behalf of our staff, it was an honor to provide orthopedic trauma care to one of our generation’s greatest athletes," Dr. Anish Mahajan, Harbor-UCLA's chief medical officer, said in a statement.

The crash was the latest setback for Woods, who has won 15 major championships and a record-tying 82 victories on the PGA Tour. He is among the world’s most recognizable sports figures, and at 45, even with a reduced schedule from nine previous surgeries, remains golf’s biggest draw.

The Associated Press and Ryan Moran contributed to this report.