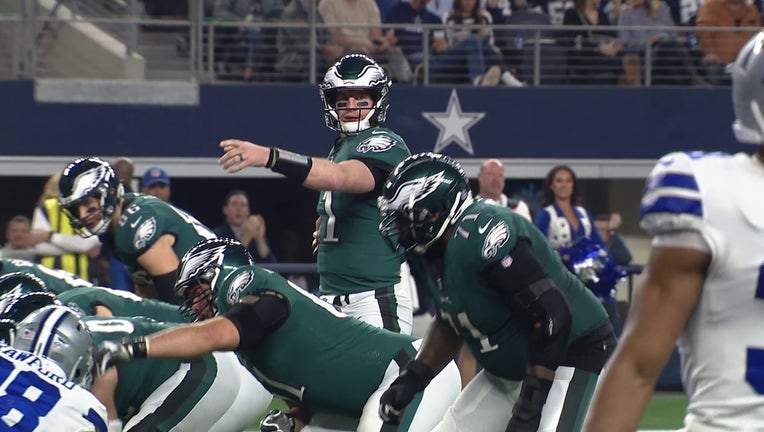 PHILADELPHIA - The Philadelphia Eagles already had a talented offense before adding DeSean Jackson, Jordan Howard, Miles Sanders, and J.J. Arcega-Whiteside in the offseason.

"My message to him and really to the team is, let the offense work for you," Eagles coach Doug Pederson said Wednesday. "Even though he touches the ball every down, just make the plays when they come, use the guys around you, and don't feel like you have to do it yourself."

Wentz will be playing his first game since last Dec. 9 when the Eagles host the Washington Redskins on Sunday. He missed the final three games and playoffs with a back injury last season after having to watch Nick Foles lead the Eagles to their first Super Bowl title two years ago because he tore two knee ligaments in Week 14 of the 2017 season.

He didn't take any snaps in the preseason, but got plenty of reps in practice with the revamped offense. Jackson, a three-time Pro Bowl wide receiver for the Eagles between 2008-13, returns to give the offense its best deep threat since he was here the first time.

Howard ran for 3,370 yards and 24 touchdowns in three seasons with the Bears. Sanders, a second-round pick out of Penn State, and Arcega-Whiteside, another second-rounder from Stanford, were impressive in August.

Zach Ertz, who set a single-season record last year for most catches by a tight end, and Dallas Goedert are possibly the best 1-2 combo at the position. Alshon Jeffery and Nelson Agholor combined for 129 catches, 1,579 yards receiving and 10 TDs in 2018. Corey Clement and veteran Darren Sproles bring versatility to the backfield.

"I think everyone's really excited because we know we have a lot of talent, we know we have the ability to do something special, but it's going to take us executing, putting it together on the field," Wentz said.

Pederson is a creative offensive coach known for his aggressive playcalling. He's looking forward to using everyone.

"I don't really categorize them as 'toys,'" Pederson joked. "They're well-oiled machines. ... It will be exciting to be able to look at the play sheet. Listen, it has to be going your way, though. We have to be executing for any of it to work. If not, it can be a long day."

Spreading the ball around will be challenging but Pederson isn't concerned about players putting their personal stats ahead of team goals. Players checked their egos in 2017 when the team won the Super Bowl without a 1,000-yard rusher or receiver.

"The guys that have been here understand how it works," Pederson said. "The guys that we've added will catch up quickly. ... The ball's going to go where the ball is going to go and that's based on the play design and the progression and what the defense presents. Bottom line is, obviously having enough for everybody in the game plan, but at the same time, our execution and ultimately trying to win a football game."