The 10th U.S. Circuit Court of Appeals ruled Tuesday that the Colorado secretary of state violated the Constitution in 2016 when he removed an elector and nullified his vote because the elector refused to cast his ballot for Democrat Hillary Clinton, who won the popular vote.

DENVER (AP) - A U.S. appeals court in Denver said Electoral College members can vote for the presidential candidate of their choice and aren't bound by the popular vote in their states.

The 10th U.S. Circuit Court of Appeals ruled Tuesday that the Colorado secretary of state violated the Constitution in 2016 when he removed an elector and nullified his vote because the elector refused to cast his ballot for Democrat Hillary Clinton, who won the popular vote.

The ruling applies only to Colorado and five other states in the 10th Circuit: Kansas, New Mexico, Oklahoma, Utah and Wyoming.

It could influence future cases nationwide in the unlikely event that enough Electoral College members strayed from their states' popular vote to affect the outcome of a presidential election, constitutional scholars said. 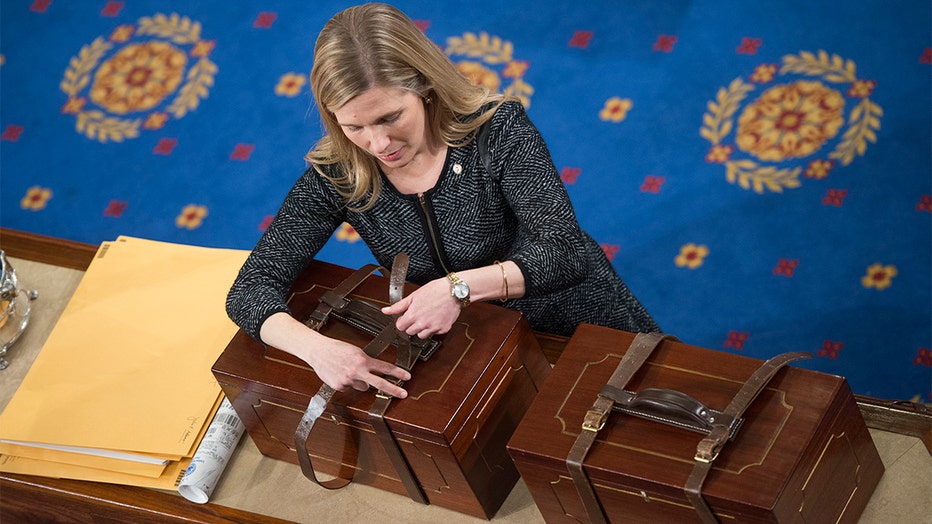 FILE: An aide opens Electoral College ballot boxes during a joint session of Congress to tally ballots for the president and vice president of the United States, January 06, 2016. (Photo By Tom Williams/CQ Roll Call)

The Electoral College system is established in the Constitution. When voters cast a ballot for president, they are actually choosing members of the Electoral College, called electors, who are pledged to that presidential candidate. The electors then choose the president.

Electors almost always vote for the popular vote winner, and some states have laws requiring them to do so.

But the split decision by a three-judge panel on the Denver appeals court said the Constitution allows electors to cast their votes at their own discretion. "The state does not possess countervailing authority to remove an elector and to cancel his vote in response to the exercise of that Constitutional right," the ruling said.

The elector at the center of the case, Micheal Baca, was part of a group known as "Hamilton electors" who tried to convince electors who were pledged to Clinton or Donald Trump to unite behind a consensus candidate to deny Trump the presidency.

After a flurry of filings in state and federal courts, the electors met on Dec. 19, 2016, and Baca crossed out Clinton's name on his ballot and wrote in John Kasich, the Republican governor of Ohio who also ran for president.

Then-Secretary of State Wayne Williams refused to count the vote and removed Baca as an elector. He replaced him with another elector who voted for Clinton.

Colorado's current secretary of state, Jena Griswold, decried the ruling Tuesday in Colorado but did not immediately say if she would appeal.

"This court decision takes power from Colorado voters and sets a dangerous precedent," she said. "Our nation stands on the principle of one person, one vote."

Baca's attorneys said the U.S. Supreme Court will likely hear the case because it conflicts with a decision from Washington state's Supreme Court. That court said in May that electors could be fined for not casting ballots for the popular vote winner.

"The court just might think this isn't something that demands our attention right now," said Michael Morley, a professor at the Florida State University College of Law.

The court ruling in Denver could be important if a future Electoral College is so closely divided that a handful of "faithless electors" change the outcome by casting a ballot contrary to the popular vote, said Ned Foley, a professor at Ohio State University's law school.

"This opinion would be taken very seriously," he said. "It would be considered judicial precedent."

But that kind of split in the Electoral College is unlikely, said Morley.

"So many individually unlikely events would have to fall in place for that," he said.

Hundreds of electors have cast votes in the history of the nation, "and only a handful have been cast by faithless electors," Morley said.