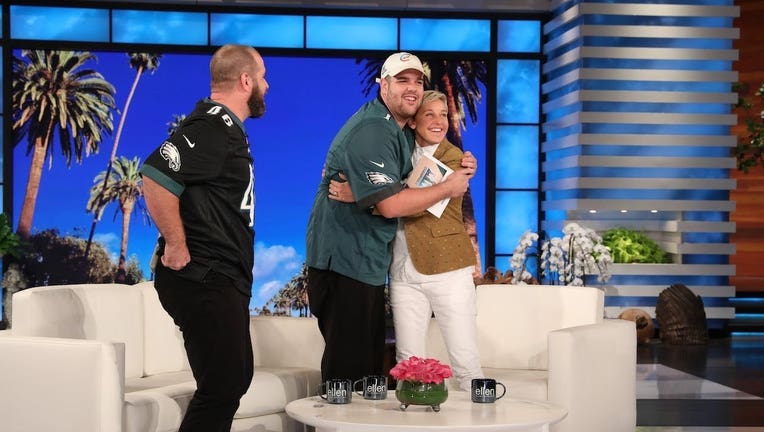 The 20-year-old, who acts as an ambassador for the Eagles Autism Challenge, is slated to appear in an episode of The Ellen Show alongside former Philadelphia Eagles long snapper Jon Dorenbos.

Dorenbos teamed up with host Ellen DeGeneres to surprise Hartranft with a $10,000 donation for autism awareness and other gifts.

North Penn student gets honored for raising awareness about autism

"I can't describe to you how much you will love meeting Ben," DeGeneres tweeted ahead of the show.

Hartranft, who was diagnosed with autism at age 2, captured the attention of the Eagles over the summer for his philanthropy. In June, he was invited to carry in the Lombardi Trophy at the team's Super Bowl Ring Ceremony as a thank you for the $7,000 he raised for the Eagles Autism Challenge.

The organization, which hosts a family-friendly cycling and 5K event, is dedicated to raising funds for autism research and related programs.

Ryan Hammond, the organization's executive director, stopped by Good Day in September to talk about the team's ongoing efforts alongside Hartranft.

The second iteration of the Eagles Autism Challenge is scheduled for Saturday, May 18, 2019, with the day's events kicking off on the 50-yard line at Lincoln Financial Field.

For more information on the Eagles Autism Challenge, see here. Those interested in donating to Hartranft's fundraiser for this year can do so here.

The Good Day team discusses the latest iteration of the Eagles Autism Challenge.