Sondland says ‘eveyone was in the loop’ over Ukraine issue

U.S. Ambassador Gordon Sondland issued striking testimony Wednesday where he mentioned that dozens of top officials knew about the dealings with Ukraine.

WASHINGTON - The most highly anticipated witness in the impeachment inquiry of President Donald Trump told House investigators Wednesday that Rudy Giuliani was pushing a “quid pro quo” with Ukraine that he had to go along with because it’s what Trump wanted.

“Mr. Giuliani was expressing the desires of the president of the United States, and we knew that these investigations were important to the president,” Sondland testified about Trump’s personal lawyer.

“We did not want to work with Mr. Giuliani,” the ambassador said. But he said Trump told him and other diplomats working on Ukraine issues “talk with Rudy” on those matters. “So we followed the president’s orders.”

During the public impeachment inquiry hearing, Sondland made clear that he believed Trump was pursuing his desire for investigations in return for the Oval Office meeting that the Eastern European nation’s president sought. Sondland said he later came to believe military aid that Ukraine relied on to counter Russia was also being held up until the investigations were launched. 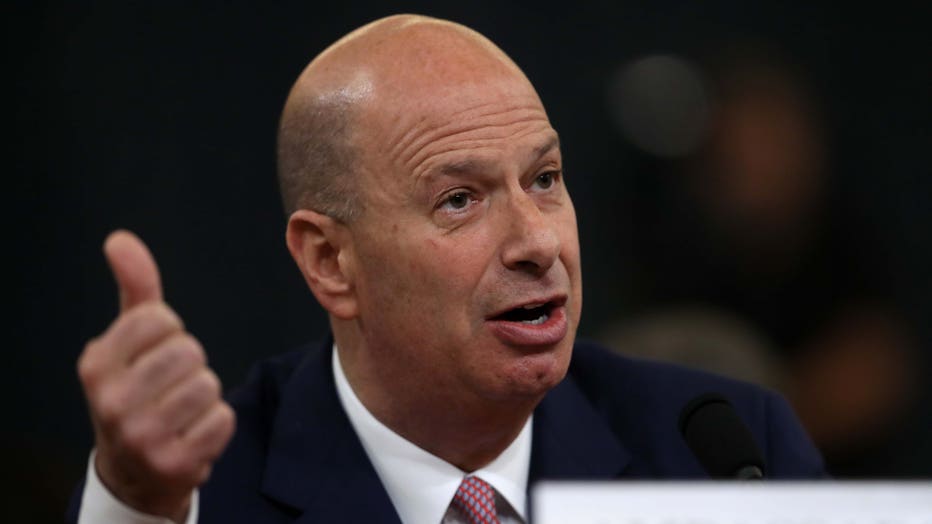 Gordon Sondland, the U.S ambassador to the European Union, makes an opening statement before testifying to the House Intelligence Committee on Capitol Hill on Nov. 20, 2019 in Washington, D.C. (Photo by Chip Somodevilla/Getty Images)

Sondland described how demands became more serious with more conditions on any potential Ukraine meeting at the White House.

“As time went on, more specific items got added to the menu -- specially Burisma and 2016 meddling,” he said, referring to the gas company where Joe Biden’s son Hunter served on the board. And, he added, “the server,” the hacked Democratic computer system.

“I know that members of this committee have frequently framed these complicated issues in the form of a simple question: Was there a ‘quid pro quo?’ As I testified previously, with regard to the requested White House call and White House meeting, the answer is yes,” he said.

Sondland said he didn’t know at the time that Burisma was linked to the Bidens, but has since come to understand that.

“We had been hearing about it from Rudy and presumed Rudy was getting it from the president,” he said.

The impeachment inquiry is centered on allegations that Trump sought investigations of Biden and his son — and the discredited idea that Ukraine rather than Russia interfered in the 2016 U.S. election — in return for the badly needed military aid as well as the White House visit.

The wealthy hotel entrepreneur and Trump donor has emerged as a central figure in an intense week with nine witnesses testifying over three days. Both Democrats and Republicans were uncertain about what Sondland would testify to, given that he had already clarified parts of his initial closed-door deposition before lawmakers.

Sondland’s opening statement also confirmed that he spoke with Trump on a cellphone from a busy Kyiv restaurant the day after the president prodded Ukraine’s leader to investigate his Democratic political rival.

The ambassador also said he kept Secretary of State Mike Pompeo and other top administration officials aware of his dealings with Ukraine on the investigations Trump sought.

Sondland said he specifically told Vice President Mike Pence he “had concerns” that U.S. military aid to Ukraine “had become tied” to the investigations.

“Everyone was in the loop,” Sondland testified in his sworn statement. “It was no secret.”

A top Pence aide denied that the conversation between the vice president and Sondland occurred.

Trump has insisted he did nothing wrong in his dealings with Ukraine, casting the impeachment inquiry as a politically motivated effort to push him from office.

While speaking to reporters outside the White House on Wednesday during the hearing, he said he wanted nothing from the Ukrainians and did not seek a quid pro quo. He also distanced himself from Sondland, a major donor to his inauguration, and did not take questions from reporters.

"I don't know him very well. I have not spoken to him much,” Trump said, speaking from notes on the hearing, written with a black marker. 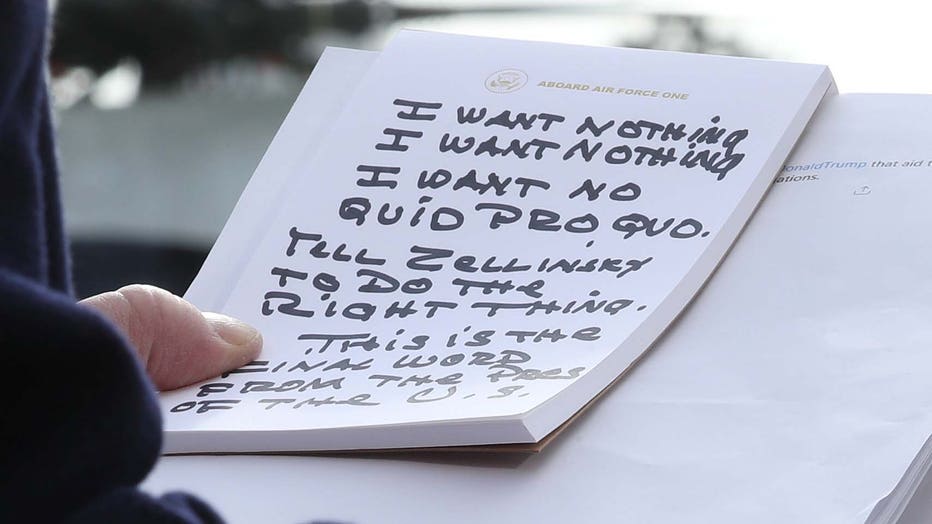 President Donald Trump holds his notes while speaking to the media before departing from the White House on Nov. 20, 2019 in Washington, DC. Trump spoke about the impeachment inquiry hearings taking place on Capitol Hill. (Photo by Mark Wilson/Getty

Sondland’s account regarding these dealings has shifted. The ambassador previously said he could not recall many of the events involving him that other witnesses recounted in vivid and colorful detail.

In response, Sondland said his testimony had “not been perfect” because Trump’s administration had refused to give him access to calendars, phone records and other State Department documents that he said might have helped him accurately answer questions.

Sondland told House impeachment investigators that he’s “not a note taker or a memo writer. ” Any discrepancies in his testimony were due to the lack of documentation, he suggested.

He did produce new emails and text messages to bolster his assertion that others in the administration were aware of the investigations he was pursuing for Trump from Ukraine.

Sondland insisted, twice, that he was “adamantly opposed to any suspension of aid” for Ukraine. “I was acting in good faith. As a presidential appointee, I followed the directions of the president.”

Dubbed one of the “three amigos” pursuing Ukraine policy, Sondland is disputing that they were running some “rogue “ operation outside official U.S. policy. He produced emails and texts showing he, former special envoy Kurt Volker and Energy Secretary Rick Perry kept Pompeo and others apprised of their activity.

One message from Volker said, “Spoke w Rudy per guidance from S.” He said, “S means the secretary of state.”

He said the State Department “was aware that a commitment to investigations was among the issues we were pursuing.”

Democrats say Trump demanded that Ukraine investigate his Democratic rivals in return for U.S. military aid it needed to resist Russian aggression and that may be grounds for removing the 45th president. Trump says he did no such thing in his call with President Volodymyr Zelenskiy and the Democrats just want him gone.

In Moscow on Wednesday, Russian President Vladimir Putin said he was pleased that the “political battles” in Washington had overtaken the Russia allegations, which are supported by the U.S. intelligence agencies.

"Thank God,” Putin said. “No one is accusing us of interfering in the U.S. elections anymore. Now they’re accusing Ukraine.”

In opening statements, House Intelligence Committee Chairman Adam Schiff said the House has “not received a single document” from the administration as it has investigated Trump’s dealings with Ukraine. He said Trump and Pompeo have made “a concerted and across the board effort” to obstruct the investigation and “they do so at their own peril.”

Rep. Devin Nunes, the ranking member of the House Intelligence Committee, again expressed his disdain for the Democrats' impeachment inquiry, calling it a "circus."

"Mr. Sondland, you are here to be smeared," Nunes told the ambassador.

Nunes also renewed his demand to hear from the still-anonymous whistleblower whose complaint about Trump’s July 25 phone call with Zelenskiy led the House to open the impeachment inquiry.

Sondland’s appearance follows the testimony Tuesday of four national security and diplomatic officials, including a career Army officer who described Trump’s call with Zelenskiy as “improper.”

Lt. Col. Alexander Vindman told lawmakers it was his “duty” to report his concerns about the call, as he deflected Republican attacks, including from the White House on his loyalty and career in public service.

Those appearing in the public hearings have already given closed-door interviews to investigators, and transcripts from those depositions have largely been released.

Laura Cooper, a deputy assistant defense secretary, and David Hale, the undersecretary of state for political affairs, testified together in Wednesday’s afternoon session that started when the morning hearing is completed.

Both Holmes and Hill will testify publicly about their accounts on Thursday.