CHOP demonstrators said message of denouncing systemic racism and police violence and oppression will carry on after SPD forced out protestors in the occupied protest zone on Wednesday.

SELAH, Wash. (AP) - A family in Washington state could face up to year in jail or be fined no more than $5,000 if they continue to draw chalk on their street in support of Black Lives Matter, a city attorney said.

“At this point, your clients have merely been warned,” Case said. “The city does not desire to prosecute anyone over this, but neither will the city give repeated warnings ad nauseum or let your clients (or anyone else) create unauthorized graffiti on public property with impunity.”

Some of Perez’s adult children and others have drawn phrases, slogans and other art on the dead-end street since June 7 but city public works crews came each time to wash the chalk away, Cutler said.

Erasing chalk art promoting Black Lives Matter while allowing other chalk drawings such as rainbows, stars and “Selah Class of 2020” to remain untouched is a violation of the artists’ First Amendment rights, Cutler argued, adding that the city’s graffiti ordinance does not cover chalk art, as water-soluble chalk is not listed as a graffiti implement.

Case argued that Perez’s family was not being singled out because of their support for Black Lives Matter and that the city removed the chalk after receiving complaints, and would do the same to any other chalk art, even if it was in support of President Donald Trump. 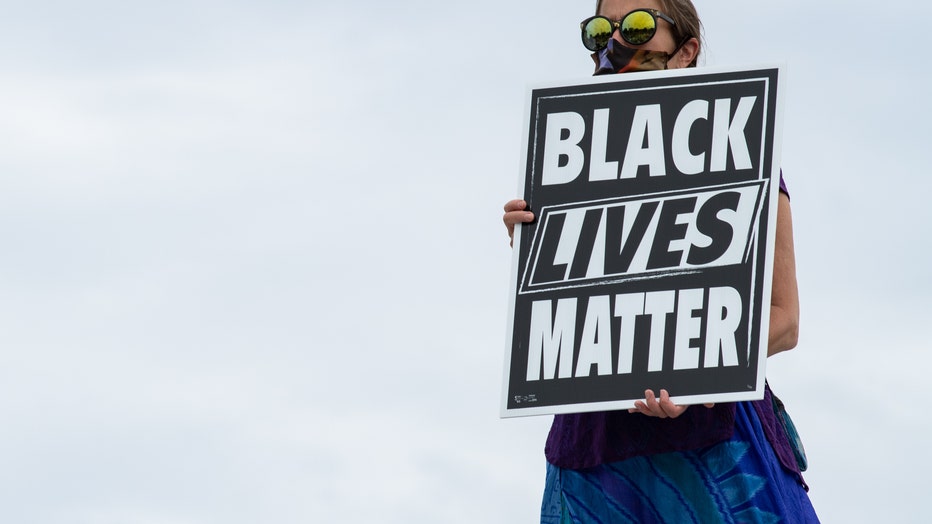 SEATTLE, WASHINGTON - JUNE 19: A woman on a roof holds a Black Lives Matter sign during the Freedom March & Celebration organized by King County Equity Now in Seattle, Washington on June 19, 2020. The US on Friday marked Juneteenth, the annual co

“Publicly stating a view that someone may not like is not a crime. Using graffiti laws against chalk marking, if it leaves no physical damage, to erase a message that someone does not like raises potential First Amendment concerns,” the ACLU of Washington said in a statement Tuesday.

Protests have spurred in Selah, just north of Yakima, after City Administrator Don Wayman called Black Lives Matter a “neo-Marxist organization” and described its supporters as “devoid of intellect and reason,” the Herald-Republic previously reported. Wayman previously said he would not quit.