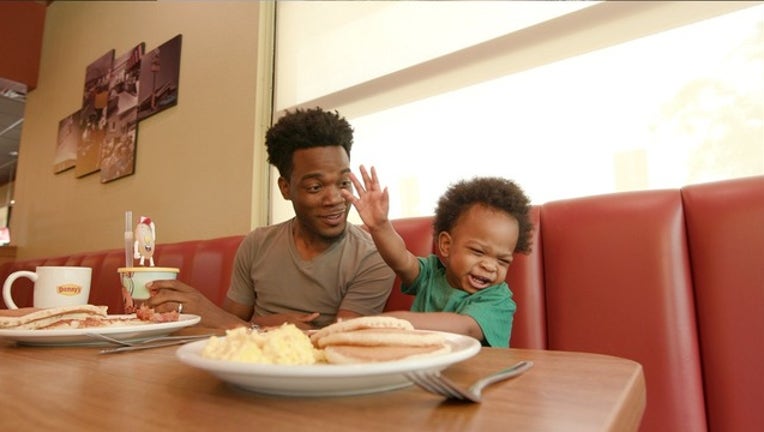 The adorable father and son whose video of their casual 'conversation' on the couch went viral are now starring in their very own Denny's commercial.

The popular diner chain tapped the duo for the Father's Day commercial, showing them hanging out in one of the restaurant's booths eating breakfast.

“Perfect that we came here to have a booth chat, just among father and son, right?” Pryor begins.

Kingston, however, seems very uninterested, instead, preferring to play with the straws before feeding his daddy some bacon. DJ, of course, keeps the conversation going. The commercial ends with a heartwarming hug between the pair.

DJ and Kingston won the hearts of the internet after their video, posted by Shanieke Pryor, of the two discussing a TV show went viral.

“They need to work on that, right?” Deztin asks. Kingston gives a simple “Ya.”

“Yes, okay. Did you understand it, though?” he asks. Baby affirms “ba” with a nod, then blathers an apparent question, judging by his inquisitive inflection.

“Not this one. It’s the grand finale,” dad replies. Then they really get into it as Kingston begins pointing at the screen with a look of dubiety.

“That’s what I was wondering! I don’t know what they’re gonna do next season,” says Deztin as Kingston nods and yammers in agreement. “Exactly.”

Exasperated with the program, Kingston throws his hands in the air, eyebrows raised, and blabs to dad, who agrees emphatically.

“Right, that’s why I’m saying! Don’t bring that in, you know what I’m saying?” he responds. “Go somewhere else with that.”

The viral video has racked up a mind-blowing 59 million-plus views since being posted earlier this month.