President Joe Biden on Aug. 16, 2021, called the Taliban capture of Afghanistan gut-wrenching but rejected blame for what's happening and stood behind his decision to pull U.S. troops out after a 20-year war.

KABUL, Afghanistan - A female television anchor interviewed a Taliban official for an on-camera interview on Tuesday that was broadcast in Afghanistan, an interaction that once would have been unthinkable and seemingly part of the insurgents’ efforts to portray a new image.

Beheshta Arghand, a host for the private broadcaster Tolo News, sat a few feet away from Mawlawi Abdulhaq Hemad, a member of the Taliban’s media team. Arghand asked him about Kabul’s situation and house-to-house searches in the Afghan capital after being overtaken on Sunday.

"The entire world now recognizes that the Taliban are the real rulers of the country," Hemad said in the interview, according to a translation by the New York Times. He added: "I am still astonished that people are afraid of Taliban." 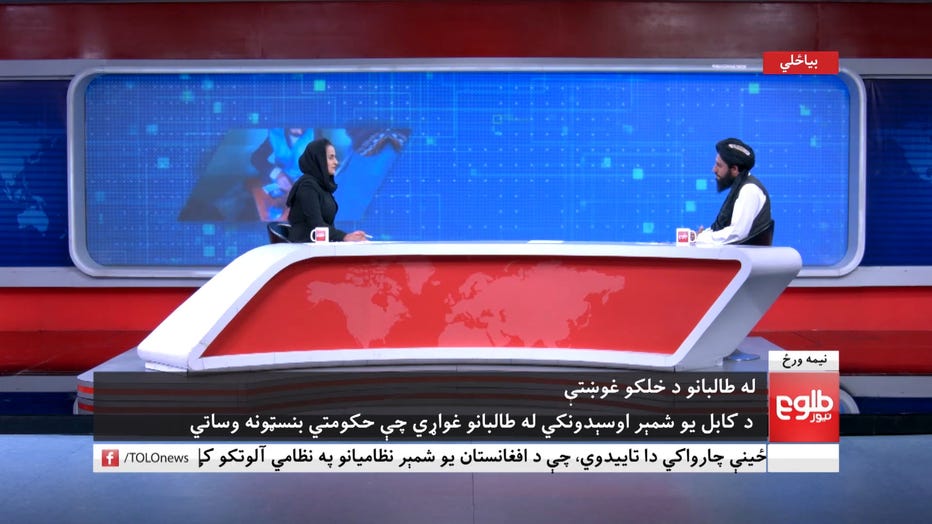 Afghan news outlet Tolo News posted footage on Aug. 17, 2021, of one of its female anchors, Beheshta Arghand, interviewing a spokesman of the Taliban after the group’s takeover of Afghanistan. (Photo credit: TOLOnews via Storyful)

Tolo News, billed as Afghanistan’s first 24-hour news and current affairs network, resumed its broadcast with female anchors on Tuesday after the country fell to the Taliban. At least two additional female journalists from the outlet also reported from the field in Kabul, according to the outlet’s head of news Miraqa Popal.

The Taliban has sought to portray itself as more moderate than when it imposed a brutal rule in the late 1990s. When they last held power, the Taliban severely restricted women’s lives.

But many Afghans remain fearful and skeptical — particularly the millions of women in the country. Older generations remember the Taliban’s ultra-conservative Islamic views, which included women being largely confined to their homes as well as public stonings and amputations before they were ousted by the U.S-led invasion following the Sept. 11, 2001, terror attacks.

Afghan women have made major gains since their overthrow. The Taliban have said they are no longer opposed to women attending school but have not set out a clear policy on women's rights. Afghanistan remains an overwhelmingly conservative country, especially outside major cities, and the status of women often varied, even under Taliban rule.

Women in hijabs on Tuesday demonstrated briefly in Kabul, holding signs demanding the Taliban not "eliminate women" from public life.

RELATED: Taliban seizes Afghanistan: What happened and what could come next

Another Taliban spokesman, Zabihullah Mujahid, held his first news conference later Tuesday and pledged to honor women’s rights — but within the norms of Islamic law. For years, Mujahid had been a shadowy figure issuing statements on behalf of the militants.

Mujahid also said the Taliban wanted private media to "remain independent," but stressed journalists "should not work against national values."

After a blitz that lasted over a week, Mujahid promised that the insurgents would secure Afghanistan and sought no revenge. He insisted that everyone had been pardoned by the Taliban, even if they worked with the former government or with foreign governments or forces.

"We assure you that nobody will go to their doors to ask why they helped," he said.

But some in Kabul have alleged Taliban fighters have lists of people who cooperated with the government and are seeking them out.

A broadcaster in Afghanistan told the Associated Press that she was hiding at a relative’s house, too frightened to return home much less return to work following reports that the insurgents are also looking for journalists. She said she and other women didn't believe the Taliban had changed their ways.

She spoke on condition of anonymity because she feared for her safety.